Difference between revisions of "1934 Big Strike" 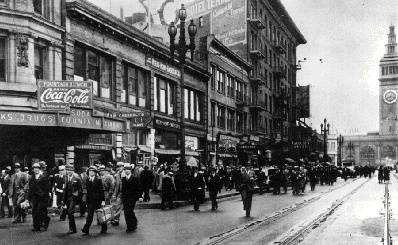 The 1934 waterfront strike in San Francisco is by all accounts a seminal event in class relations in the city. There are accounts of this period in many history books, but not so many versions tell a comprehensive tale of the strike, and most are steeped in romanticism of one sort or another. We present a series of screens here with texts, photos, captions, and videos that attempt to present the basic story. It follows this sequence: