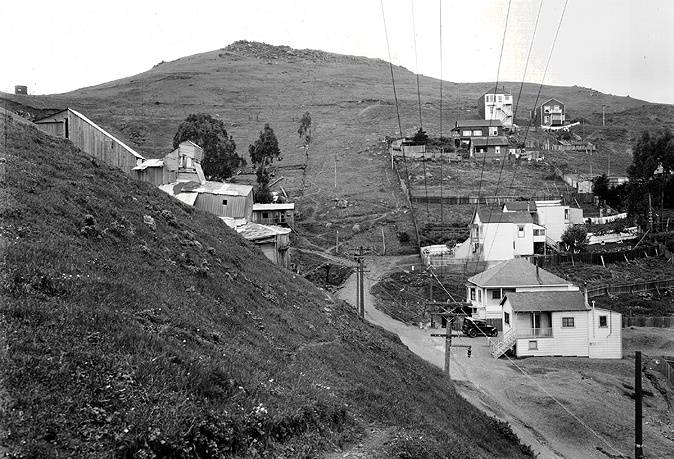 George and Harry Gray (the Gray brothers) owned a total of three quarries in San Francisco. Besides the Corona Heights Quarry, one was located on Telegraph Hill, and the third at Thirtieth and Castro (now called Billy Goat Hill) located above Noe Valley, seen here.

San Francisco needed the rock from the quarries was initially used for ballast in oceangoing ships. Pieces of Telegraph Hill today are parts of cobblestone streets in Chile and China. Furthermore they used the stones for construction, street paving, bay fill and others, and the Gray brothers provided it — crushing homes, destroying lots and seriously injuring people in the process.

Of the bricks that were produced at the factory, many of them were used in the cable car beds. Subsequently it was determined that these bricks were substandard and had to be replaced.

"In the first place, there have been no men killed there, and the work of quarrying out the rock is not done in a dangerous manner at all, but, on the contrary, it is done to the best advantage in regard to accidents of any kind. The men quarrying out the rock are persons who have worked in that business for a great many years and thoroughly understand it." – H. W. Gray

The brothers opened , in the early 1890s their first quarry at Green and Sansome streets, on the eastern side of Telegraph Hill. Then they began blowing up huge chunks of the rock face — heedless of the homes that were perched nearby. The community became enraged with the Gray brothers when adults and children were injured by falling rocks, and homes were damaged by flying debris.

"The only concession the quarrymen made was to schedule their explosions, giving parents time to grab their children and seek refuge from the flying rocks and breaking glass. Nearby homes became more endangered with each blast, and soon one kitchen floor was carried down the hill." - David Myrick - "San Francisco's Telegraph Hill"

In January 1894, one of their explosions caused a rockslide that crushed a duplex at 312 1/2 and 314 1/2 Vallejo Street. After a shoemaker's house at the corner of Union Street and Calhoun was blasted off its foundation, a judge issued a permanent injunction in 1895 forbidding the Gray brothers from blasting.

Although the Gray brothers faced lawsuit after lawsuit, they kept quarrying. After the Judge's order in 1895, they just shifted their business to another part of town, and opened another stone quarry near 26th and Douglass streets in Noe Valley. The sheer walls of the quarry are still there, on the west side of Douglass Playground.

The residents kept on complaining, and the Grays kept on ignoring them. In November 1899, residents of the area complaining of flying rock, broken windows, cracked plaster and broken pipes that spewed raw sewage into the street, sued the Grays. Six months later, on May 25, 1900 about 40 area residents, "most of them ladies," appeared before the Board of Supervisors to complain that the Gray brothers were still doing their dangerous dynamite explosions.

But the Grays were powerful and politically connected, and despite their obvious violations, the board did nothing. Their excuses were, that "1,500 men would be thrown out of work," if the stone quarry on Douglas Street would close. Another way to deal with the unhappy residents was the response of the board, saying that they would "inspect the site" — but never did, which meant the Grays could continue blasting away. 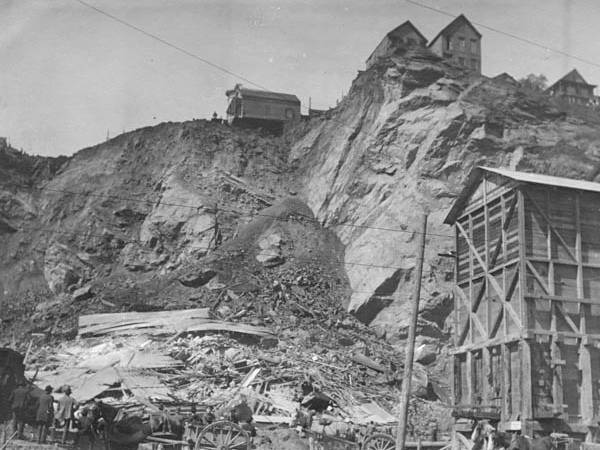 The handwritten caption of this photo by Hamilton Henry Dobbin says “Another one about ripe enough to tumble into Grey Bros quarry off Telegraph Hill 1908.” A 1910 photo shows the building still perched there.

Meanwhile the fight about Telegraph Hill continued. By 1900 the ongoing damage alarmed not just the hill’s modest homeowners, but civic groups who wanted it preserved as a landmark. The Grays had long openly declared their desire to level the entire hill, and despite the judge's order, they resumed their blasting. A member of the California Club called the hill on 3 January 1900 “one of the natural and beautiful sites of San Francisco in addition to being closely identified with the early history of the city.” But quarry owner George Gray called it “very unsightly” and argued, among other things, that “if Telegraph Hill were cut down, residents on the east side of Russian Hill would have a magnificent marine view they do not now enjoy.”

On June 30, 1904, a property on Calhoun Street had been destroyed by the Grays' blasting. As usual, the brothers blamed the damage on another quarrying company, an absurd claim backed by a supervisor who bore the apt name Rock. Furthermore their attorney stated, that the brothers were not excavating anymore but merely grading the hill with pick and shovel. The attorney of the owner pointed out then, that "a short time ago ... Calhoun Street was passable by a wagon. Now, it is a sheer precipice 125 feet high.” And it was true: the Gray’s blasting had literally erased a stretch of Calhoun Street. Later that year, an assistant city engineer testified that their quarrying did not threaten the houses on Calhoun.

In 1909, the Grays used the Fourth of July cannon fire in the Presidio to cover the sound of their illegal blasting on Telegraph Hill. In the same year, Carolyn Bush, their cashier and George Gray's secretary, was shot and killed by an unpaid worker who lost his temper.

On November 10, 1914, Joseph Lococo, a desperate 36-year-old worker, approached George Gray at another quarry they owned at 29th and Castro streets, near Billy Goat Hill, to ask him for $17.50 in back wages. The Sicilian immigrant was ill, had not eaten for two days, had a wife and two babies who were starving, and was about to be evicted from his house on Arkansas Street.

Gray, by this time a millionaire, laughed in his face, then told him to get out. Lococo pulled out a gun and shot Gray dead. Lococo was acquitted by reason of temporary insanity and walked out of the courtroom a free man, cheered by 100 supporters.

The quarrying and the company ended at that time and their firm went bankrupt. Harry Gray lived until 1937, long after his brother had paid a heavy price for the firm's misdeeds. 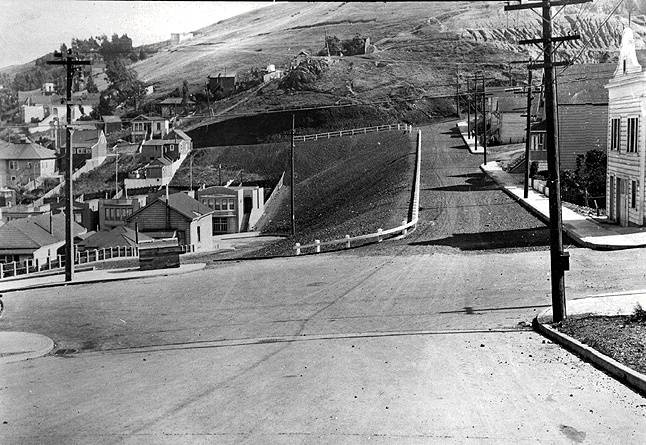