1877 unemployed in the sandlots 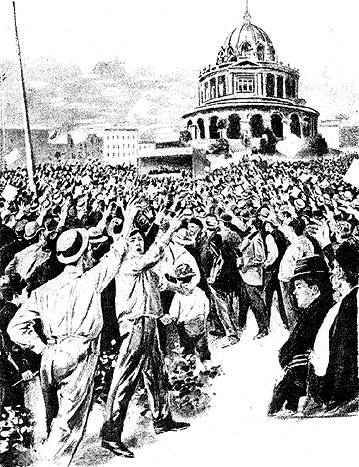 "Bedraggled and wretched, they stood endlessly in the winter rain. They trailed through the streets of the white men's section begging a handout at the charity kitchens; they clamored on the City Hall steps for half a days labor setting cobblestones or cleaning the city sewers. They waited in the sandlots for a word from Kearney or Kalloch.”

Mrs. Anna Smith was a regular speaker among the unemployed in the sandlots of San Francisco. Born in 1835 in New York state, she was put out to domestic service as a child, worked in a shoe factory which shut down during the depression of 1857, worked in a girls' seminary and public school, was a nurse for the Union Army during the Civil War, husband died in Missouri and she ended up scrubbing and ironing from Denver to San Francisco in time for the depression of 1875. In SF she tried work as a cook, housekeeper, and finally found herself unemployed. One reporter found her “well informed on matters connected with the labor question.” She frequently spoke publicly at the sandlots, adjourning by announcing that “she wanted something to keep her jaws going and give her tongue a rest,” and supposed “all present felt the same.”