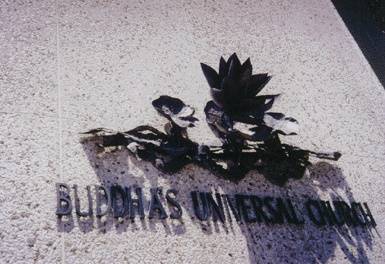 Buddha's Universal Church on Washington in Chinatown was a meeting spot for workers in the 1938 Garment Strike.

This was the site for the meetings during the 1938 garment worker strike against National Dollar stores. At the time of the strike, the garment industry was the largest employer in Chinatown. Like today, employees worked in sweatshops with low wages, long hours and unsafe lighting and ventilation. National Dollar workers, who were not unionized in 1937, tried to negotiate with Joe Shoong, the factory owner, for better hours and higher wages, but he refused. The ILGWU, desperate to include Chinese in the labor movement in order to cut down on the competition posed by these low-paid workers, recognized their opportunity to finally bring Chinese workers into the labor movement. Because of the historical antagonism of unions towards Chinese workers who were viewed as "unfair competition," the garment workers were initially reluctant to work with the ILGWU, but they finally joined and formed Local 341 of the Chinese Ladies' Garment Workers' Union in November 1937. On Feb. 26, 1938 the local declared a strike. The women picketed the factory and three retail stores in San Francisco. The women won their strike in June of that year, with a settlement that granted a closed union shop, 5% raise, a 40-hour work-week with time and a half overtime, and enforcement of health, fire and sanitary conditions.

All women immigrant workers struck against Esprit in the 1960s. Community members got involved, many of them activists who would later be involved in the fight for the I-Hotel. The factory eventually closed, and lawyers at the Asian Law Caucus finally obtained money for back wages ten years later.