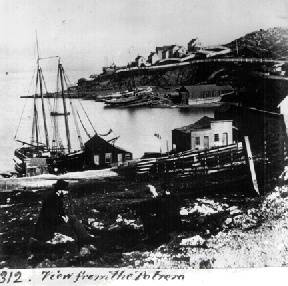 Material presented in much of the Potrero Hill chapter is excerpted from a study written in 1964 by Cheryl and Clark Kaplan. [Please note that all references to the present-time, such as "now," have been bracketed to emphasize that they refer to a period over 30 years ago. Ed.--1995]

Three hundred feet above the San Francisco Bay on the western shore, stands Potrero Hill. Potrero lies well within the limits of San Francisco, yet in many ways it is as distant as Moscow, Dublin, or Rome. Surrounded on three sides by industry and on the fourth by bloody bay shore, the hill is almost an island, adrift on a sea of the city: Seventeenth and Nineteenth streets on one side, and Twenty-fourth on the south.

To view Potrero from afar does not reveal any tell-tale hints that it is a hill at all. Only the name gives a clue. In fact, it had been several small hills known as Scotch Hill, Irish Hill, Russian Hill and even Nanny Goat Hill. Some streets go straight down the face of the hill with grades as steep as thirty per cent. In other areas the roads are completely impossible because of the hilly terrain. The only exception to this is an area where public housing is laid out in terraces, with the streets winding down the hillside in a leisurely manner.

To further complicate the problem, lots are not laid out in the same way as the blocks. Lots are drawn up in a helter-skelter fashion, a combination of old and new. The city lines and boundary lines are used in conjunction with the Spanish lines. Spanish Lines are byproducts of Spanish California, left over from original land grants. These lines followed logical curves of the hill or sectioned-off terrain that was useful for particular purposes.

The lots that are products of this unique meeting are generally small, about 25 x 100 being the average size. Like the streets and blocks, they are placed without regard for the spectacular view that lies across the city from them. This simple fact gives a clue to the nature and background of the hill. In fact, it appears as if the excellent weather and spectacular view were only after-thoughts to the people of Potrero. 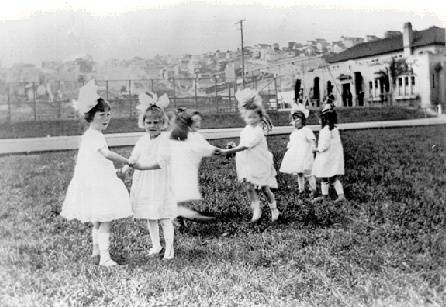 Girls play at Jackson Playground in about 1920.

Unlike the other hills of San Francisco, Potrero was never considered a spot for elegant homes. Even in the era when the position of a house on a hill was almost indication of social status, Potrero Hill housed only the working class. As the peninsula is the bedroom of modern white collar San Franciscans, Potrero has always been the bedroom of the working class. Rising out of the smoke and smell of production, Potrero almost appears as a large white dome surrounded by a moat of steel and concrete. Too steep for industry, Potrero proved an excellent spot for housing of laborers. This housing of tools of production has been the primary function of the hill.