Unraveling the Mystery of Lake Dolores 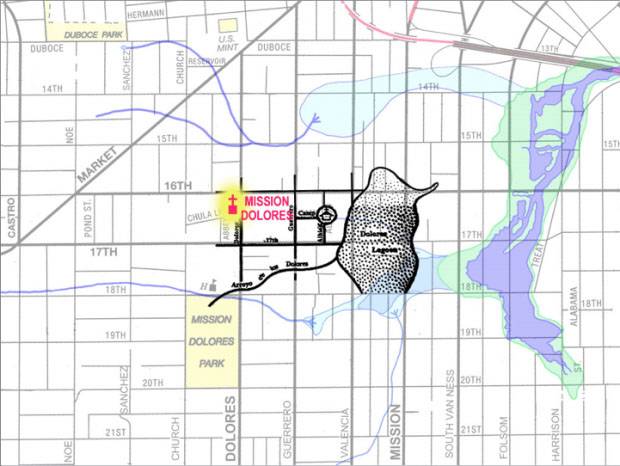 Biologist Christopher Richard has researched waterways throughout the Bay Area. This is his map of the water flow in the Mission District. It includes historic streams, tidal inlets and marshlands that no longer exist in the urban environment. The dark blue shows where the tidal inlet was, and the light blue is shallow seasonal wet areas. The black map is a replica of the historical monument displayed at the intersection of Camp and Albion, showing a freshwater lake that Richard disputes. 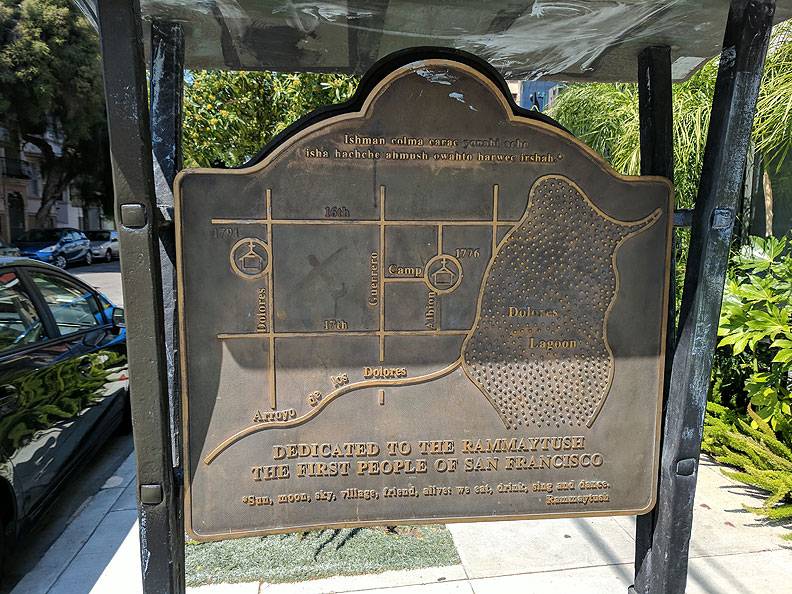 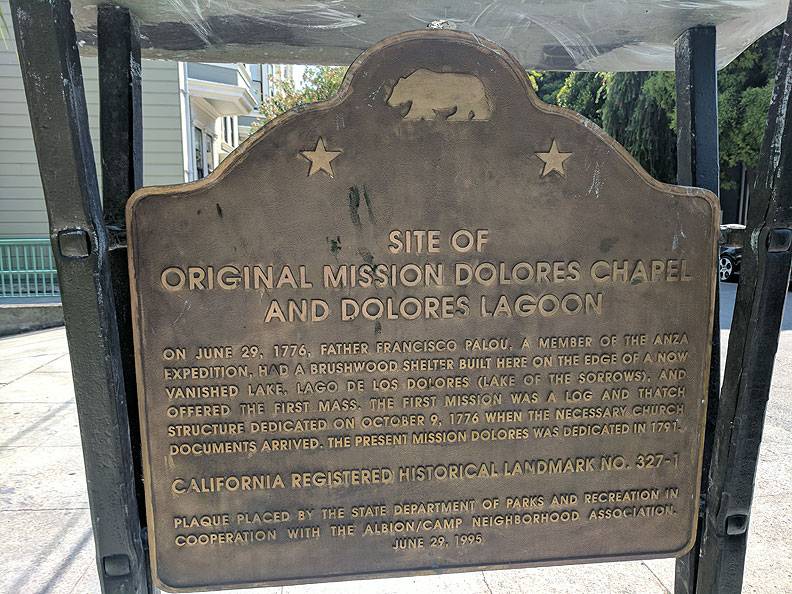 Explanatory side of historical marker at Camp and Albion.

It was just another creek map. Christopher Richard, a biologist and editor at the Oakland Museum, had been creating them for watersheds throughout the Bay Area. The one he started in the mid-2000s was for San Francisco. The survey data in front of him wasn’t quite enough, so he dipped further into research — poring over explorers’ maps and historical literature.

Particularly confusing was a body of water in the Mission Bay watershed described by explorers and drawn by some cartographers: Laguna Dolores, known popularly as Lake Dolores.

Richard studied at least 100 maps of the San Francisco peninsula drawn before 1912. None showed a large second body of water — most showed only the tidal inlet that had been navigable in the past up to what is now 16th and Harrison streets. Many maps showed the inlet as tidally connected; others drew no inlet to the Bay and simply inserted an isolated body of water, often titled Laguna Dolores.

Richard wasn’t the first to doubt the existence of a freshwater lagoon in the Mission District. At the celebration of San Francisco’s centennial in 1876 it became the focus of a small debate. In 1942, George Merrill wrote a pamphlet titled “The Story of Lake Dolores and Mission San Francisco de Asis.” For his research, Merrill spoke with some of the oldest living Mission residents; one of them said he remembered a dock at 17th and Guerrero as a boy.

Richard considered all of this, but a deadline loomed. He and his co-mapmaker, geologist Janet Sowers, had to publish something. Sowers wanted to follow the detailed 1852 Coast Survey map that excluded the lagoon. But Richard was swayed by the historical accounts and a popular 1912 map by Zoeth Eldredge.

Sowers and Richard compromised. They drew in Dolores Lagoon, but not firmly. Whereas creeks and inlets and marshland were indicated by solid lines, a series of dashes represented the lagoon — a clue that its whereabouts was essentially a guess.

The creek and watershed map was published in 2007, but Richard wasn’t happy. For him, the dashes indicated unfinished business, a mystery unresolved.

“I’m not comfortable having published this sleazy-weazy broken-line indication of what was there,” he said recently. “I feel some guilt at this point of having drawn [that] map. I had an engendered determination to get it straight this time.”

So he began this project — now stretched to four years — to answer one question: Did Laguna Dolores ever exist?

“This has become a research obsession for me, in a sort of way nothing ever has,” he said.

The original name, Dolores, and its hydrological descriptions, are rooted in paragraphs from the diaries of the Spanish explorers who founded the San Francisco mission.

Their journeys brought them to San Francisco when the Spanish government sent Juan Bautista de Anza to scout locations for a presidio and mission. Richard began there, too — digging up all 232 pages of de Anza’s elongated cursive field notes.

He looked at the paragraphs describing de Anza’s days on the San Francisco peninsula in late March 1776, in which the explorer mentioned three bodies of water.

One was Mountain Lake in what would become San Francisco’s Presidio, where he camped. Then, de Anza wrote, he found a good spot for planting crops that could be irrigated with water from the “ojo de agua o fuente,” a phrase that translates to spring or fountain. He wrote that entry as he was looking for a location to set up a mission and grow food to nourish his soldiers at the presidio.

The third body of water he described as a permanent “laguna,” and also as a “laguna de manantial,” or spring-fed pond.

The laguna “does not have any land which could be irrigated,” de Anza wrote in 1776 (translated in 1930 by Herbert Bolton), “because the tide of the sea overflows the lowlands there, but on the banks of the laguna good gardens can be planted.”

Richard says this topography describes the body of water later known as Washerwoman’s Lagoon near Lombard and Gough, where miners had their sweaty shirts washed during the Gold Rush.

“He talks about them (the water bodies) out of sequence,” Richard said of de Anza’s notes. “It’s a really difficult paragraph to parse.”

The next day de Anza again describes going to the “laguna de manantial” and “likewise to the ojo de agua, which I called los Dolores.”

The chaplain who accompanied de Anza, Father Pedro Font, described the journey on the same day.

“We arrived at a beautiful creek, which because it was Friday of Sorrows, we called the Arroyo de Los Dolores.” (Dolores is the Spanish word for sorrows.)

These two entries indicate that the water body named Dolores was either a spring or a creek somewhere in the Mission.

Much of San Francisco was vegetated dunes before development — not good for planting crops. The only good alluvial soils on the peninsula are in the southeast corner, today’s Mission District.

Richard believes that de Anza needed to find arable soil and an uphill water source, and that’s what he saw in the ojo de agua. But the ojo called Dolores, Richard believes, was a spring, not a lake.

Richard, a scientist with experience in hydrology and waterways, believes that the spring de Anza and Font found was near where Duboce and Sanchez streets meet today.

“It makes absolute perfect geomorphic sense that there was a spring there. The subterranean water coming through the dunes comes up on alluvial soil.”

The spring was the source for a creek that ran down Duboce, past the Mint, into seasonal marshlands that flowed near 14th Street to the tidal inlet. Water not diverted to sewers still flows underground there today. 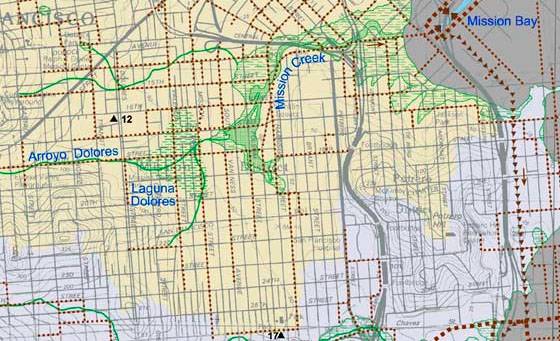 This is a portion of the creek map that was the result of a compromise between Christopher Richard and his colleague Janet Sowers. It shows a Dolores Lagoon, but with no outline.

The next mention of Dolores comes from Father Francisco Palou, who in June 1776 rode north from Monterey with soldiers, colonists, herdsmen, servants and their families to set up camp and a mission, following de Anza’s suggestions.

After a 10-day journey, where they encountered 11-foot-long elk and herds of antelope, Palou writes, “The expedition arrived near its destination. The commander (Jose Joaquin Moraga), therefore, ordered the camp to be pitched on the bank of a laguna, which Señor Anza had named Nuestra Señora de los Dolores, and which is in sight of the Bay of the Weepers and of the bay or arm of the sea that extends to the southeast.”

Out of the three journals, this is the first mention of Dolores as a lagoon.

Richard thinks that Moraga, Palou and their big group were coming in with horses and cattle from the south after a long journey. They saw the sand blowing and the wind whistling up ahead, and they decided to set camp on the ridge between two creeks (near 16th and Dolores), shy of the exact spot that de Anza and Font had declared a good place for a mission.

Richard believes they wanted to stay on higher ground, above two freshwater creeks — the one that flowed from the spring at Duboce and another that came off Twin Peaks and ran down 18th Street.

One reason to stay further up, Richard said, was that the willows down by the creeks were good stomping grounds for grizzly bears and mosquitoes.

Palou set up a hut, recited the first mass, and Mission Dolores was born. Of the two nearby creeks, he referred to the one on 18th Street, not the one flowing from Duboce, as Dolores Creek.

The Power of Maps

The 1852 Coast Survey — the one that was enough to convince Richard’s mapmaking colleague Sowers that there was no lagoon — was a thorough map, according to Richard.

“It was the first trustworthy map — everything else is essentially a sketch. They were out there dragging chains through marshes, getting tidal sloughs. It was days and days of work to map through the marsh.”

The Coast Survey was detailed and showed exactly where waterways were.

Another map, 60 years later, painted a different picture, and had a profound impact on all that would follow.

It was by Zoeth Eldredge, who wrote a book in 1912 titled “The Beginnings of San Francisco.” It included a map with the vanished lagoon drawn underneath the streets. It was labeled Laguna de Manantial — the same words de Anza used to describe Washerwoman’s Lagoon. 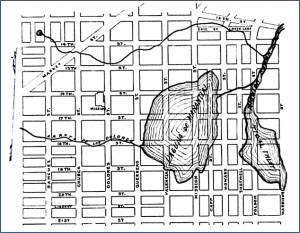 This map was drawn by Zoeth Eldredge and published in his 1912 book, "The Beginnings of San Francisco." Richard and other historians believe the map was a catalyst for the Dolores Lagoon theory.

Others agree that Eldredge’s map was a catalyst for incorrect history.

“That map was drawn in 1912 by a guy who misreads the diaries,” writer and historian Chris Carlsson said of Eldredge. “He invented a myth. There’s not really any prior evidence of a freshwater lake. Maps are usually drawn based on previous maps.”

Another reason the lagoon seems suspect to Richard is because the creek near 18th Street ran through a naturally formed 40-foot gully, mostly infill today. Wouldn’t water have drained into the gully and flowed out to the Bay?

Richard presented his research recently to the San Francisco Estuary Institute. The geomorphic scientists there engaged in a roundtable discussion. They tried to test scenarios for how the lagoon described by Eldredge could have been in that location in 1776 and not there in the 1852 Coast Survey.

They tested beaver dams, earthquakes and other ideas. “There wasn’t a single person who could come up with a theory that could possibly explain a body of water there,” Richard said.

Richard’s next map of the Mission Bay watershed, to be published this year, shows that parts of the Mission were very wet — the fresh water running off the hills joined with the tidal inlet, which would rise and fall. Areas between 17th and 19th streets, South Van Ness and Valencia could have standing water in heavy rainy seasons, but Richard describes it as at best “seasonal inundation” or “a splursh on your boots.” Not a lake.

This article originally appeared on February 15, 2011 on the blog Mission Loc@l