Those of you that live in the San Francisco area are familiar with two Greek churches in San Francisco, Holy Trinity and Annunciation Cathedral. Holy Trinity is the oldest Greek church west of Chicago and Annunciation Cathedral was founded in 1921. Most Greeks are very surprised to learn that there was a third Greek Orthodox Church that existed for a brief period on Rincon Hill. 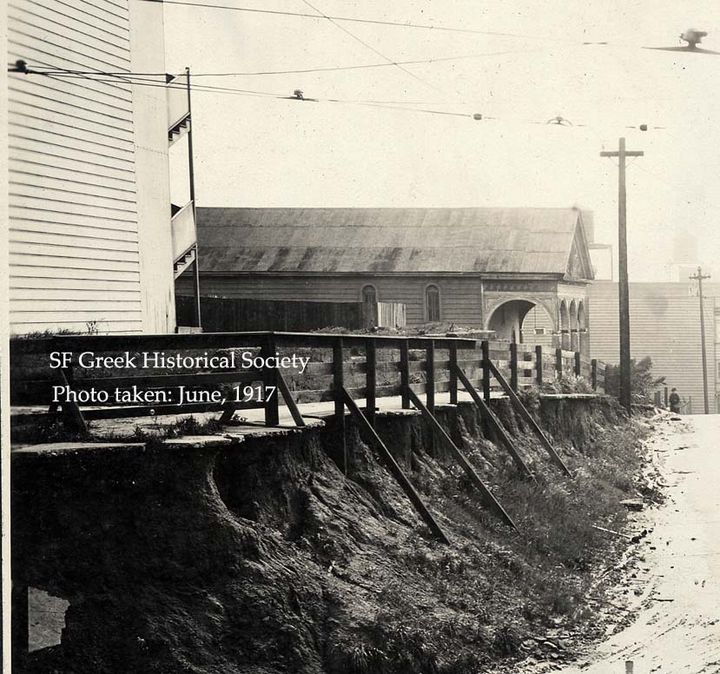 In 1908 there was a disagreement over parish council elections and the handling of money at Holy Trinity. The disagreement turned violent on July 12, 1908, when police were called to Holy Trinity (San Francisco Call, 7-13-1908, “War Raged at the Door of the Sanctuary”). A faction led by Ioannis Kapsimalis (former parish council president and Greek Consul) decided to start their own church. They acquired land on Rincon Hill (35 Stanley Place), built a church which they named St. John Prodromos (see photograph above). They built offices and a meeting hall which they named the “Alexander the Great Meeting Hall.” They hired Father Constantine Tsapralis as their first priest (There is a common misunderstanding that Fr. Tsapralis’ service at Holy Trinity was continuous from 1903 – 1936 which is not true). The Holy Trinity community in turn hired Fr. Stefanos Macaronis as their next priest.

On December 2, 1909, the factions resolved their differences and St. John Prodromos ceased to exist. Fr. Tsapralis was rehired by Holy Trinity and Fr. Stefanos Macaronis moved to a parish in Oregon. From 1910 until Holy Trinity was raised to install a meeting hall in 1922, this property served as the offices and meeting hall for the community. There are numerous news articles in the San Francisco Chronicle and San Francisco Call relating to Greek community events that were held at the Alexander the Great Hall. This building was a vital part of Greek community life.

The property was later sold to the State of California to make room for the San Francisco-Oakland Bay Bridge closing this early chapter of San Francisco Greek history.

Jim Lucas is the President of the Greek Historical Society of the San Francisco Bay Area and can be reached by email at jim [at] sanfranciscogreeks [dot] com. More San Francisco Greek historical material can be found here.