Difference between revisions of "The Sound Truck: A Novelized Account of the SF State Strike"

Eli Green sensed he’d get arrested today, arriving at the striking campus early. In the predawn darkness, he left the trolley he’d taken from his Mission District student apartment down Market Street under the misty Twin Peaks and out to San Francisco State College near the ocean.

Staring at the duplex housing development across the street from the campus, he stood by the administration building stormed last week by ten thousand students while the Tactical Squad blocked the top steps with tear gas guns and clubs poised, holsters unbuttoned. Shielding his eyes, he spotted in the development’s parking lot under the streetlights in the beginning dawn, four black police paddy wagons. Another Muni streetcar pulled in; early strikers got off, some carrying signs ON STRIKE, SHUT IT DOWN, FIGHT RACISM, GRANT THE TEN DEMANDS. Polly Nelson, one of Eli’s fellow SDS members, handed out leaflets to the few students still attending classes. 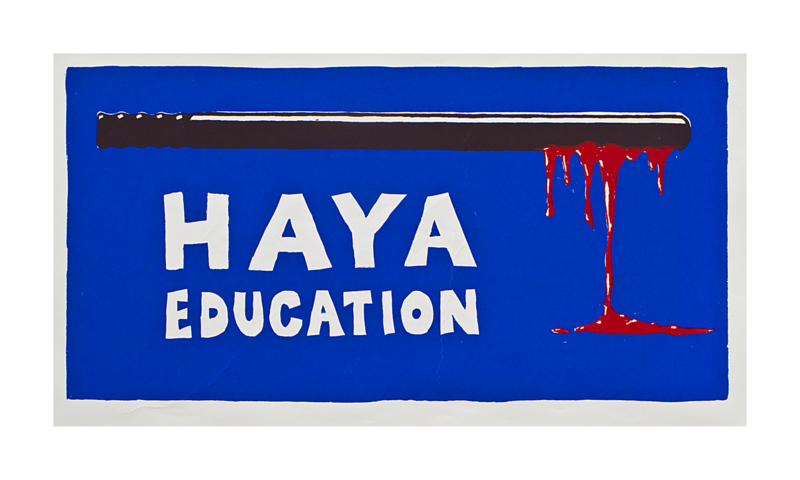 As Eli joined the forming picket line, a voice blared from a truck with two huge speakers parked on the corner.

“THIS CAMPUS IS ON STRIKE! WE STILL HAVE TEN RIGHTEOUS DEMANDS! WE STILL HAVE A FIGHT AGAINST RACISM AND THE REHIRING OF GREG MORRIS FIRED LAST WEEK BY THE STATE TRUSTEES ON STRIKE! SHUT IT DOWN. FIND OUT WHAT IT’S ALL ABOUT. FIND ABOUT OUR NEW ILLEGAL PRESIDENT.”

“SCARED OF A LEAFLET!”

“Maybe they’re still not sure.”

“ON STRIKE SHUT IT DOWN. OUR FIGHT AAINST RACISM FOR OUR JUST DEMANDS CONTINUES! JOIN US! THE CHICKENSHIT ARE SO SCARED OF US THAT LAST WEEK RATHER THAN HAVE ANY DIALOGUE IT SHUT DOWN THE CAMPUS AND FIRED THE PRESIDENT. A FLUNKEY IS NOW IN PLACE IN VIOLATION OF THE FACULTLY SENATE’S OWN HIRING PRACTICES. THAT’S RIGHT. THE TRUSTEES TOTALLY BYPASSED IT AND HIRED A TOADY FLUNKEY, OUR OWN FREDDIE ARE BACK.WE ARE HERE WE ARE NOT GOING AWAY ANY TIME SOON UNTIL OUR JUST DEMANDS ARE MET AND WE SMASH RACISM ON THIS CAMPUS!

The familiar voice was one of his best friends Jack Goldin a leader of the white student strike committee supporting the Third World Liberation Front led by the Black Students Union. The chanting intensified.

A group of women, black, white, a few Latinas and some Asians were half-dancing on the line to a sassy staccato chant.

RACISM’S IMPUNITY HAS NO IMMUNITY IN THIS COMMUNITY
ITS NO LONGER MEANT TO BE
That’s what we say And We won’t go away We here to stay
`Til we end racism now (and HOW!)

Suddenly, Eli was knocking on the truck door. Jack, microphone in hand, rolled down the window.

Jack gave his special scrutiny as if laying back on a very relaxing sofa while simultaneously sizing him up.

“I got here early. There`s four paddy wagons in the Lake Merced parking lot. Something’s jumping off sooner than later. You’ll be needed.”

Jack turned to his left, pointing.

A thin, bronzed guy about Eli’s age nodded, his hands alert and tense on the steering wheel. He wore a blue work shirt, very old jeans, and older tan cowboy boots. Jack got out. Eli took the microphone attached to the dashboard.

“Know how this works?” Jack asked.

The microphone had a small on-off switch even a mechanical nebbish like Eli could figure out. He plugged it in, turned on the switch, and heard his own voice crackle, “THIS CAMPUS IS STILL On Strike”. He flung his fist into the air and bellowed,” LET`S SHUT THIS RATHOLE DOWN!”

Eli was startled, hearing his voice reverberate off the entire Humanities building, the sky, the very trees.

“WE ARE ON STRIKE AGAINST RACISM! JOIN US! WE HAVE TEN JUST DEMANDS” Juan leaned over.

“Don’t hold it too close; it gets garbled.”

Hearing his own voice elated him, words booming towards the campus buildings.

“WE`RE STILL ON STRIKE FOLKS! FOR TEN JUST DEMANDS! HELP US! LET THE ADMINISTRATION KNOW WE WON’T TOLERATE RACISM ON THIS CAMPUS!” “A PROXY FAKE HAS GRABBED THE PRESIDENCY VIOLATING THE PROCESS OF HIS OWN FELLOW FACULTY ACADEMIC SENATE FOR SELECTING A NEW PRESIDENT.”

His cart-wheeling heart matching each syllable. The Muni Trolley rolled in. Students poured out. Most joined the picket line or tried to dissuade the few trying to enter buildings for classes.

“FELLOW STUDENTS!” Eli urged, “ JOIN US! JOIN THE FIGHT AGAINST RACISM! GET THE LATEST! S.I. HAYAKAWA ASSUMED THE PRESIDENCY LAST NIGHT IN OUTRIGHT VIOLATION OF THE FACULTY SENATE’S PROCEDURES WITH NO DISCUSSION AND NO VOTE! ARBITRARILY SELECTED BY THE CALIFORNIA STATE BOARD OF TRUSTEES”

“ONE OF RICHARD NIXON’S BIGGEST DONORS HAS GIVEN HAYAKAWA FORTY THOUSAND DOLLARS TO SMASH OUR STRIKE!” “NO WAY,” the demonstrators shouted, working up a new chant, “NO WAY NOT TODAY OR ANY OTHER DAY!”

“THAT’S ENOUGH FOR TUITION FEES FOR ALMOST ONE HUNDRED STUDENTS!”

“40000 BUCKS. ENOUGH FOR TWO FACULTY POSITIONS EACH FOR A BLACK STUDIES AND LA RAZA STUDIES DEPARTMENTS!”

“AND WERE GOING TO WIN, BROTHERS AND SISTERS; IT’S JUST A MATTER OF TIME”

“UNITE AND FIGHT! ON STRIKE! SHUT IT DOWN”

Eli blinked. Sunlight propelled by a flurry of faces exploded around the windshield and side window.

“WHAT THE HELL YOU DOING, MAN?” Juan yelled.

Television cameras glinted brightly a pounding on the window continued a contorted furious face with a skewed hat/beret/tamoshanter yellow-white-orange trying to yank open the closed window a face screaming. Eli partially rolled down the window a suited hand tried to grab his face or his ear, clawing hand, scrabbling a grey suit a furious face.

Eli yanked the mike out. The hand disappeared with shrieks then a huge THUD NUCK above his head the metal ceiling throbbed someone jumping trying to crush the ceiling of the cab. Eli pushed the door open, looked up at Hayakawa stomping, gloating, hurling flyers, screaming.

“GODDAMMIT” Juan yelled, lurching out of the truck and jumping onto the bed, “LOCO, GET OFF MY TRUCK!”

The cameras kept filming; one cameraman stretching on the hood half on his back pointing his camera up to the truck’s speakers.

Students now surrounded the truck, some climbed up, shouting. “SCREW YOUR FLYERS!”

“GET OFF THE TRUCK YOU, CRAZY BASTARD!”

“PUT THAT ON TV, PRESS FLUNKIES!”

Growling, Hayakawa yanked on the speakers.

Eli quickly plugged the microphone back in and cleared his throat.

“GET OFF MY TRUCK” Juan said.

“SHUT HIM UP!” students shouted. “SHUT HIM DOWN!”

“DON’T CURSE HIM IF YOU DON’T WANT YOUR TEETH KNOCKED OUT” said a blue-ribboned HAYAKAWA supporter.

“WHO’S GONNA DO THAT, YOUR MOTHER?”

“MY MOMMA WILL KICK YOUR MOMMA’S ASS INTO NEXT WEEK!”

HAYAKAWA had his arms around the speaker, tugging, spittle running down his chin.

“BEHOLD OUR FEARLESS LEADER! HE JUST TRIED TO MURDER A MICROPHONE AND NOW HE’S TRYING TO HUMP OUR SPEAKERS!”

“WE’RE STILL ON STRIKE! WE STILL HAVE TEN DEMANDS TO END RACISM HERE! “

“I’LL EXPEL EVERY ONE OF YOU!” HAYAKAWA shrieked, seeking the speaker wires and tugging.

“HAYAKAWA! EICHMANN!” yelled a teacher in residence, the famed novelist Kitty Doyle who ‘d covered the rise of Nazi Germany in Europe.

The chanting zoomed in volume. “ON STRIKE! BLACK STUDIES NOW! SHUT THIS MOTHER DOWN!

A group of BSU and La Raza women swayed and danced with upraised fists.

“HAYAKAWA HE AINT COOL! HE AINT RUNNING OUR SCHOOL!”

The sound went dead. HAYAKAWA jumped off the truck, yelling, “WE’VE CALLED THE POLICE ON YOU ANARCHISTS. GET BACK! DON’T TOUCH ME! I’LL CRUSH EVERY ONE OF YOU FILTHY HIPPIES!”

Students kept pushing against him as his supporters tried to lead him away. And now they came: the boys in blue, the San Francisco Tactical squad, shoving their way as if their batons were extra pairs of elbows. A group of faculty members sympathetic to the strike ran up as the sergeant knocked on the window Eli rolled down.’

“Get out of the truck, boys. You are under arrest.”

A faculty leader, Hal McDermott, put his hands up to the sergeant.

“Now let’s not be precipitous, Sergeant.”

“What did they Do?” asked another faculty member.

“THEY WERE ATTACKED BY THAT MANIAC!” Polly shouted.

“Pursuant to sections 907 and 1043 of The California State Penal Code, you are under arrest for disturbing the peace and—”

“Disturbing the peace!” Polly squealed as friends pulled her back. ”WHO DISTURBED WHO? WE WERE FINE PEACEFULLY PROTESTING UNTIL THAT LUNATIC TRIED TO TEAR THE TRUCK APART! WHERE WERE YOU THEN?

“And operating a sound truck without a permit.”

A paddy wagon rolled up behind the truck.

“Put your arms up against van and spread your legs.”

“MY mouth? What your so-called dam President? You didn’t hear him swearing or see him SPITTING at us?”

“LET THEM GO! WHERE THE HELL WHERE YOU” the crowd chanted.

Two cops searched them, patting them down.

“You’re overdoing this, Sergeant. This is quite unnecessary.”

“YOU GOT THE WRONG ONE!

“Why don’t you arrest HAYAKAWA, goddamit?!”

The paddy wagon door opened, the floor white grey the color of seagull shit. There was a small barred window and a metallic bench. As the door closed, six Tactical Squad officers lumbered in, helmets still strapped, visors down.]