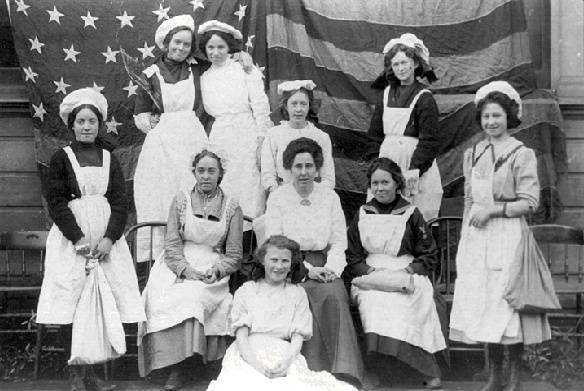 Between 1850 and 1900, there appeared several groups of immigrants, who settled on Potrero Hill; the Scotch and Irish predominating.

THE SCOTS came to this area in 1865 from the Clyde River area in Scotland to work in the shipyard, and later to work in the Union Iron Works, established in 1883. The area chosen by the Scottish people to be their new homeland was on top of Potrero Hill along Mississippi, Texas, and Connecticut Streets. The name "Scotch Hill" was recognized by its residents at that time.

The Scotch built one of the first churches on the hill, the Olivet Presbyterian Church, in 1868. The structure burned in the 1870's, was rebuilt, and again burned several years later in the 1900's.

A charming gentleman by the name of Rintoul first came to "Scottish Hill" in 1893. He has lived in the same house at 522 Connecticut Street since that time and to the lucky visitor, he may expound on the subject he knows so well, the early years of Potrero: "Mostly pastureland at the time of 1893. There were a few scattered houses, several along this street and all of them belonged to Scottish families. I used to have a relative who lived over on De Haro Street at the top of the hill. Used to go visit him and we crossed Chilit Pass. That's the area of Carolina Street where there is a dip in the Hill." The small valley divided Scotch Hill and the higher hill known later as Russian Hill. The name originated from the Gold Rush, according to Mr. Rintoul.

THE IRISH settlement was also present on the hill in the 1870s. The Irish immigrants, arriving by ship from Ireland, carrying few personal belongings, settled on the hill near Twenty-Second and Illinois Streets. Many of those people came to San Francisco seeking employment at the Pacific Rolling Mills. If work could not be found there, they went to the Gashouse.

Irish Hill, as it was called in the 1880s, seethed with excitement and brawny vigor. Irish Hill covered with hotels and boardinghouses such as the Green House, run by Mike Ferrell; the White House, run by Hans Rasmussen; Cash's Hotel, run by Jimmy Cole; and the San Quentin House, run by Jim Gately. The San Quentin House took in the parolees from San Quentin Prison, and got them jobs in rolling mills at the foot of the hill. Many a Saturday afternoon was filled with the sound of fighting in the streets. The boys from one hotel would challenge another to a fight. The fist-swinging fight would take place in a hay-rope ring outside of Gately's Hotel.

One man, Billy Carr, a retired deputy sheriff who lived in the Mission, could remember walking to the top of Irish Hill, ninety-eight steps, when he got off work. On one side of Irish Hill stood the blue muds of Potrero. Below it, on another side, was Dutchman's Flat, and the hill next to it was Scotch Hill.

Around the 1900s, one of the new settlers on the Hill was a man named Ramond, a dapper man, complete with goatee. Ramond and his family lived in a large white house at the corner of Wisconsin and Twentieth. Next to it were several houses extending up the hill on Wisconsin. At first glance one might receive the impression this was one of the first tracts of houses, but the original purpose of the location and identical architecture was simple housing provided for the hired help and families. These men apparently helped care for the cattle pastured on top of the hill running down to Army Street. It was thought the Ramond family were descendents of the Spanish settlers, but there wasn't written proof of it. This ranch was called by some people the Ramond's and Hawe's Ranch. Charlie Hawe was an Englishman and dairy cattle were his source of income. He had his farmhouse, built in 1889, on the northwest corner of Connecticut and Twentieth. Close to the house was a three-hundred foot well, which later had to be filled before an apartment building could be placed on the site. Across the street from the farmhouse, on the south side of Twentieth, where Atchison's Drug Store [now stands,] was a large barn for cattle. This was the same barn referred to earlier as Ramond's Hall. Water troughs for the cattle were on the northeast corner of the intersection.

The Ramond House was sold about 1925 by his daughter-in-law, Marie Ramond, to the Cassidy and Cicerone Realty Company. They in turn sold the property to the Houston family. The Houston House, as it's known by many Potrero residents, is [still standing] on the same site, quietly observing the increasing traffic on Twentieth Street, one of the main arteries of Potrero.

THE SOUTHERN SLAVS, comprised of natives of Dalmatia, Croatia, Montenegro, Slovenia and Serbia, played an important part in the early development of California. It is recorded that in the 17th Century a group of Slav missionaries journeyed from Mexico to California, carrying with them the banner of Christianity and civilization. Around the time of 1848, during the gold rush, numerous Southern Slavs left their house and set out to seek their fortunes. Countless numbers came to the port of San Francisco.

A few of the Slavs settled on the western part of Potrero Hill in the vicinity of Vermont, Kansas and Rhode Island Streets, but it wasn't until 1906, after the earthquake and fire, that the large settlement of Slovenian people came to Potrero. They [now occupy] the Vermont and Kansas Street area and have established an active organization that meets regularly in the Slovenian Hall.

The Slovenian people are a music-loving group. The Southern Slavs have always considered music an essential medium of diversion and a means of refinement of the human soul. Today, the Slovenian Hall is alive with songs and folk music. As one abruptly drives off James Lick Freeway into the Vermont Street turnoff, it appears to have been a turn into the past. One cannot help noticing the words on the massive corner building, "Slovenian Hall."

THE RUSSIAN SETTLERS came to San Francisco before the revolution in Russia, about 1900 to 1908. One main reason for their leaving their homeland was religious persecution. There were approximately two hundred families of the Molokani sect, who grew tired of being forced to change from the Protestant Molokani, meaning "milk drinkers," to the Orthodox Russian religion. They grew so angry at the loss of religious freedom that they sold many personal effects, bought wagons, and traveled to a sea port where they sailed to the United States.

The Russian peasants landed at one of the seaports, slept on the docks, and were eventually brought to San Francisco. Some of the group settled in Los Angeles, and some settled in San Francisco and farther north.

It would be safe to assume that before 1900, there could have been a few Russian families on the hill. This was because the Gold Rush brought many immigrants to the San Francisco area eagerly searching for their fortune in gold.

Many of these immigrants who settled in San Francisco found employment in the Union Iron Works, [now known] as Bethlehem Steel. They were uneducated, but eager to settle in a new land where they could have freedom of religion. The Russians built their homes on top of Potrero Hill, around the streets of Carolina, Rhode Island, De Haro, and Southern Heights. At 841 Carolina Street the Molokan or First Russian Christian Church, built about 1930, can still be seen. All Russian Churches on Potrero Hill are Protestant, and have such names as the Holy Jumpers Church and the Hillside Baptist Church. The Orthodox Russians established themselves in the Fillmore District of San Francisco.35

The Molokan Church is quite stark in its appearance. The Russian residents are devout, religious, hard-working people. The Russian women can be seen attending church in their full-length skirts with shawls or babushkas worn on their heads. The Molokan religion requires the women to always keep their head covered when out-of-doors. The elderly Russian men are often seen gathered together at the top of De Haro Street, cracking sunflower seeds, and each seems quietly immersed in thought as well as a healthy beard.

Many of the early Russian settlers took advantage of the numerous springs on Potrero, and today several "Bani" steam baths are used by the Russian people. These were not open for public use, and it would indeed be difficult to learn the location of the bani baths. The only visible clue to the whereabouts of such a steam bath is a rusty iron stove pipe emerging from the roof of a hillside building.

The Cicerone family started a grocery store in 1905, at 1204 Nineteenth Street. They were one of the FIRST ITALIAN FAMILIES to move into the Potrero community. Most of the inhabitants on the hill were Irish, Scottish, Russian, Yugoslav, Greek, and a few Chinese and Dutch.

About the year 1933 Cunio Flats, an Italian community near Fisherman's Wharf, burned to the ground. The fire caused many of the Italian families to move to Potrero. They settled in the area of Eighteenth and below Mariposa.(43)

About 1935 to 1940, many Mexican laborers moved into the area of Third and Iowa Streets. The reason they came to Potrero was to be near employment with the Southern Pacific Railroad.(44)

At the time of World War Two, negroes were brought to Potrero to work in the shipyards. Most groups who settled there had one factor in common: a home located close to their jobs.