The Houseboat Wars: A Battle of the Haves and Have-Nots 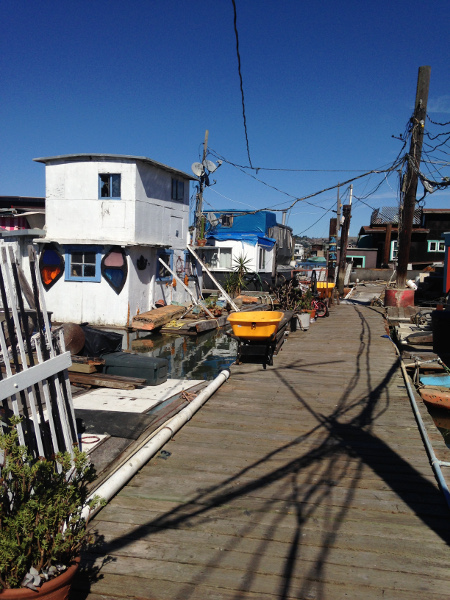 A walkway in the Gates Houseboat Cooperative.


'The Beginning
Don Arques was the son of a prominent waterfront property manager who owned much of the Sausalito shoreline used for shipbuilding during World War II. After the war, Arques purchased many of the remaining floating barges and ferries used in ship production and anchored them in the Sausalito harbor.(1) He invited Beatnik artists and musicians to live aboard them for free, making homes out of whatever floating debris they could find: styrofoam, redwood logs, parts of other abandoned boats. “Tons of wood, metal and scrap were left behind. Richardson Bay turned into an aquatic salvage yard, a tidal pool of possibilities.” (2) Additionally, large Victorians in San Francisco’s Western Addition were demolished to make way for a federally sponsored urban renewal program. As a result, large amounts of African Americans were pushed out, and over 2,500 19th century homes were destroyed. The houses were torn apart and sold cheaply as scrap: doors, stained glass windows and window frames, fireplaces, and columns were just some of the parts repurposed for houseboat living.(3) It was also at this time that the Waldo Grade was built, which erected a highway between Marin City and the Golden Gate Bridge. The construction caused a large amount of silt runoff, which eventually ran into the bay and caused some boats to get stuck in the thick tidal mud. These abandoned boats were also broken apart and reused for scrap by houseboat residents. (4)

The first homes were haphazard and had no plumbing or electricity; often, simple wooden structures were just attached to the top of decommissioned Navy tugboats. (5) In the ‘50s, residents were primarily Beatniks and Bohemians, but by the late ‘60s, the Beats gave way to the Hippies and the population grew. Famous counterculture figures such as Alan Watts, Shel Silverstein, Allen Ginsberg, and Stewart Brand, founder of The Whole Earth Catalog, made their homes here (6). Doug Storms, commercial diver and houseboat resident, describes the beginning as such: “There were a few hundred boats. It was total freedom. The music, the people, the architecture, the nudity—all we could say was, ‘Wow!’ So Shel [Silverstein] bought a boat, and I bought a boat. And that was that.” (7) 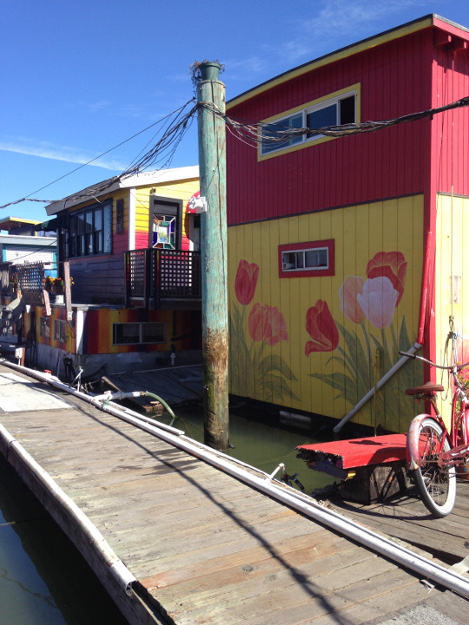 
The Charles Van Damme ferry, used from 1916 to 1956 to transport cars, cattle, and people between Richmond and San Rafael, was decommissioned in 1960 and was brought to Gate Six, the center of the houseboat community. First, the ferry functioned as a restaurant, Juanita’s Gallery, which closed and then reopened as a rock n’ roll nightclub called The Ark in 1968, where acts such as Neil Young and Steppenwolf played. (8) The Van Damme ferry became a hangout and community center for the houseboat residents, and they even had a resident band, The Redlegs, (who dubbed themselves “a hip pirate band”), which played shows to fund repairs for the Van Damme or resident’s boats. The Redlegs still exist to this day and play shows under the name The Gaters (a reference to the gates at which the houseboats are moored) at the No Name Bar in Sausalito. (9) In 1983, the ferry was demolished and only the paddle wheel and smoke stack survive, with plans to display the remains in a nearby park in Waldo Point Harbor (10).


By the mid-'70s, parties, drugs, and music had become a regular feature of the houseboat scene, and many liken this stage of the houseboats as similar to Haight Street’s descent; an influx of hard drugs and guns had created an unsavory reputation. At this time, hillside Sausalito residents and county supervisors vocalized their support for a project which would “clean up” the waterfront and remove the houseboat settlements in favor of high-rise condominiums. (11) Thus began the Houseboat Wars, a struggle between the houseboat residents and Sausalito City Council. 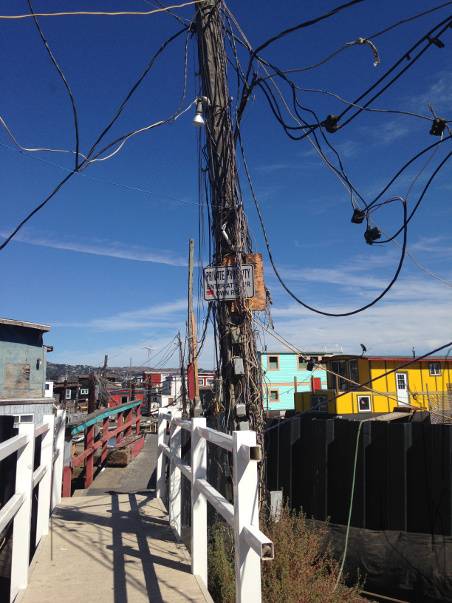 Wires haphazardly hang over the entryway at Gates Houseboat Cooperative. The city has required all houseboats and electrical systems be brought up to code.

“The ’60s were a time of sex and drugs and rock and roll, even in quiet backwaters like the Sausalito bay front. Eventually there developed a huge conflict–almost a civil war–between the freewheeling houseboaters and the more conservative population of Sausalito, most of them living in the hills of the town. It was a battle between the hill and the bay shore.” Houseboat resident Doug Storms echoes this sentiment, saying, “In the 1960s and early 70s, there was the classic conflict between the haves and have-nots.” (12)

The Marin County Board of Supervisors met in 1971 and passed an ordinance which would disperse the houseboats and develop the waterfront for condominiums. Hillside Sausalito residents complained that the houseboats were a “blight” and a nuisance. Shortly thereafter, the Marin County Sheriff began to cut the houseboats from their moors and attempted to tow them away, while ordering residents to vacate and using force to remove them. The conflict came to a head when resident Robert Grissom wielded a knife when deputies tried to cut his mooring, prompting them to draw their guns. In response, Marin County marine inspector Richard M. Larson declared a two-year Moratorium on the houseboats until a compromise could be reached (13).

On December 12th, 1977, the conflict continued when the county brought in bulldozers and piledrivers with the intention of building a parking lot at Gate 5. Deputies bulldozed part of a boatyard building at Gate 5 while people were still in it, used fire hoses on protesting residents, and even ran over one resident with a speed boat. In true houseboat spirit, the community organized an impressive resistance, creating cardboard cutouts of people and shoveling piles of debris to stand in the bulldozer’s way. The county claimed that the area being filled in was just a sewage ditch, rather than an integral part of the area’s wetlands. The houseboat community worked with scientists to prove that the area was a viable wetland with many kinds of marine life, including fish. (14) The evidence was presented to the Fish and Game service and the Bay Conservation Development Commission, but to no avail. The creek was filled in and a parking lot built, which displaced the a few of the houseboats moored there.

Houseboaters knew they would need to create an organized front to take on the city and the county, so in 1978 Gate 5 residents banded together and formed the Napa Street Pier Co-Op, which obtained a restraining order against developers to halt the demolition. Gate 6 residents followed suit and formed the Gates Cooperative in 1979. (15) In 1980, Napa Street Pier Co-Op became incorporated as the Galilee Harbor Community Association, a nonprofit mutual benefit organization. After a case ruled that the land underneath the houseboats belonged to the City of Sausalito, the two cooperatives attempted negotiation with the city, which lead to litigation. In 1983, after three years of legal fighting, a compromise was reached. The Gates and Galilee houseboats could remain in Sausalito, under the condition that the Galilee boats be relocated 30 yards north, and that all houseboats must brought up to current municipal building code. Additionally, the remodeled boats were required to meet stringent environmental regulations. A Marin County Community Development Block Grant is awarded, as well as a grant from the San Francisco Foundation, to aid in construction and repair as well as relocation. In 1992, a survey done by the Community Development Block Grant agency shows the cooperatives to be made up of mostly low-income residents; (16) the Gates and Galilee cooperatives are officially reserved as low-income housing, and currently berth rents are capped at $250-400 per month. Construction at the Gates cooperative is still in progress, with plans to disperse the Gates houseboats among the other nearby houseboat harbors to make room for new construction and development. (17)

Today, the Galilee and Gates cooperatives remain a stark contrast to the neighboring houseboats of Waldo Point Harbor, where waterborne mansions rent for hundreds a night on websites such as AirBnB and VRBO, and sell for millions. The cooperatives also stand out against the Sausalito hills, which are dotted with Tuscan style villas. But the Gates and Galilee Cooperative remain in spite of these changes, a symbol of artistic ingenuity and countercultural defiance. 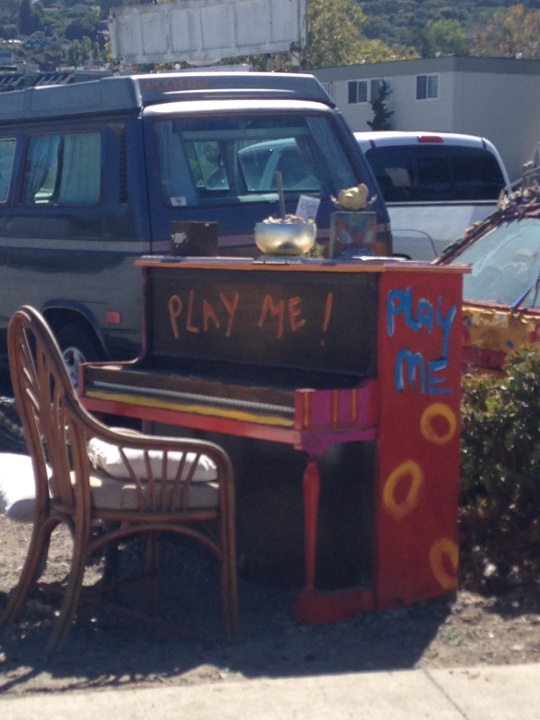 A piano outside of Galilee Harbor beckons to be played.