Difference between revisions of "The History of Telegraph Hill Dwellers" 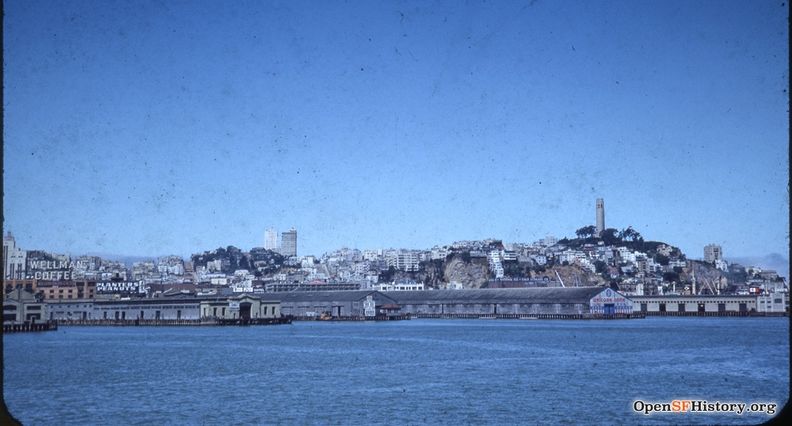 1997 view of Telegraph Hill from Bay

Telegraph Hill Dwellers was formed in 1954 and now has over 600 members. During its 40-plus years, it has led or participated in many efforts without which Telegraph Hill and North Beach would be greatly different from what they are today. Among these efforts are the following:

• Enactment of the 40' height limit on the south (downtown) side of Telegraph Hill, following a developer's proposal in 1956 to build an eleven-story apartment house near the comer of Montgomery and Union. Soon thereafter, this 40' foot height limit was extended north to the Embarcadero, to prevent construction of waterfront complexes similar to the Fontana Apartments near Aquatic Park.

• Scuttling of the plan to extend the Embarcadero Freeway north past Broadway along the eastern (Bay) side of Telegraph Hill, as part of a proposed over-water bridge between San Francisco and Tiburon which would have had an exit ramp at Stockton and Francisco.

• Abandonment of the scheme to construct a parking garage under Washington Square Park portions of which would have been visible at street-level. This scheme, which resurfaced once again in 1998, will become even less likely to occur if the Park is designated a City Landmark as is presently proposed.

• Enactment of historic district legislation for both Telegraph Hill and the Northeast Waterfront, in the former case going far to preserve the largest concentration of pre-Earthquake residential dwellings in San Francisco.

• Enactment of the North Beach Commercial District, designed to preserve North Beach's special nature and stem the proliferation of banks and other commercial uses threatening to alter permanently the businesses in North Beach.

• Greening of the hill, undertaken in celebration of THD's fortieth anniversary, with the planting of between 300 and 400 trees all over the Hill, as requested by property owners and residents, and in conjunction with Friends of the Urban Forest.

• Restoration and enhancement of Pioneer Park and Coit Tower, following City plans to surround the park with a chainlink fence; this fine example of a private-public partnership is still ongoing.

Imagine! -- A North Beach and Telegraph Hill dotted with high-rises, surrounded by a freeway, hardly green at all, its historic dwellings gone or diminished, and North Beach an extension of downtown. Efforts to avoid these consequences have been worthwhile and even essential.