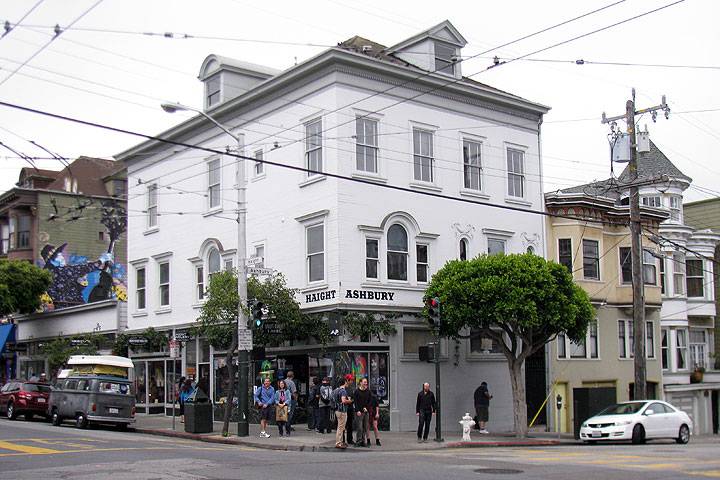 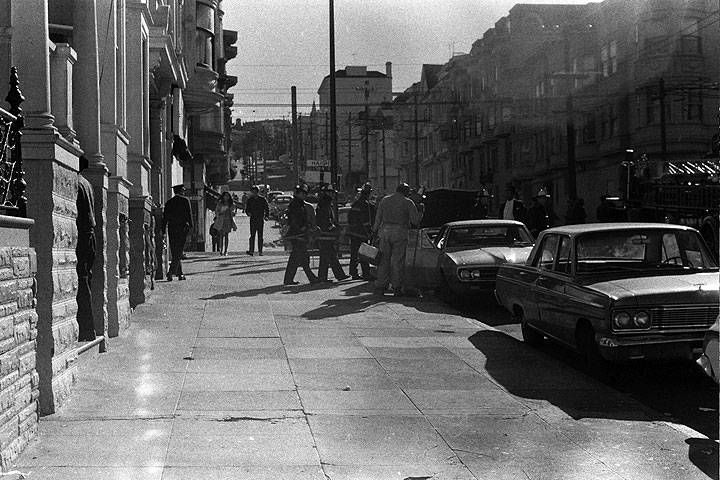 The Haight-Ashbury has been called a state of mind. It is in fact a central city residential neighborhood, one of the older such neighborhoods in San Francisco.

The historic neighborhood defined as the Haight-Ashbury is basically the area bounded by Fulton, 17th, Stanyan and Baker. Immediately after the 1906 quake, SF's finest bourgeoisie built very large mansions in the lower Haight, residing there until their larger mansions in Pacific Heights could be rebuilt. The neighborhood is basically defined by open space, which in a city as dense as SF has a tendency to create a certain character. The Haight-Ashbury has Golden Gate Park to its west, Buena Vista Park to its east, the hills leading to Twin Peaks to its south, and the open expanses of the Presidio to the north, and the great cathedral on the hill at USF. 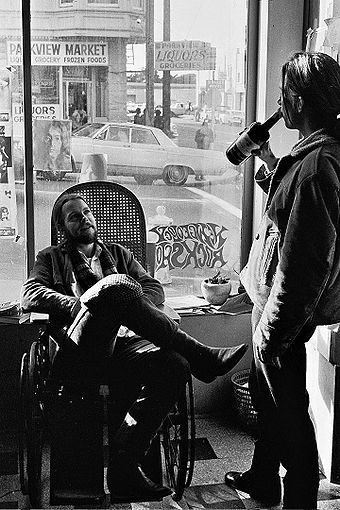 Sharing a moment at Frederick and Stanyan streets, c. 1966; Photo: © Chuck Gould, all rights reserved.
The Haight-Ashbury in 1960 was overwhelmingly a European immigrant resident neighborhood, with over 70% of the households made up of European-born immigrants, the largest number of which were Irish (in 1960, according to the census), the next largest, Russians. The housing stock of the Haight-Ashbury was mostly absentee-owned in 1960 with less than 20% of the residents owning the buildings -- it was a majority tenant neighborhood, made up of typical high-density duplexes and triplexes in the middle of the block, and large apartments buildings on the corners, sometimes with as many as 60 or 70 units.

It was a renting, working-class community in terms of socio-economic class, and predominantly of European immigrant stock. The Haight Ashbury had evidently been white for most of its history, if not all of its history. Less than 10% of the population in 1960 was non-white, with the largest number being Asians. This fact is significant, since by 1970, 24 percent of the Haight-Ashbury was African-American.

The Haight-Ashbury had two of the most well-known and energetic public high schools in the city: Lowell High School, then at Hayes and Masonic (a site presently occupied by the John Adams Adult School); and Polytechnic High School across Frederick Street from Kezar Stadium. The other high schools drew their population from the local areas, but both Lowell and Poly drew their students from the entire city.

At the time both schools were major high school athletic powers. I'm told by oldtimers in the neighborhood that when Lowell played Poly at Kezar it was not uncommon in the 1940s, 50s, or 60s, to draw 10,000-12,000 people. In a very real way those two high schools centered the neighborhood and added "family" characteristics at the time, to what was essentially a white, ethnic, working-class neighborhood. 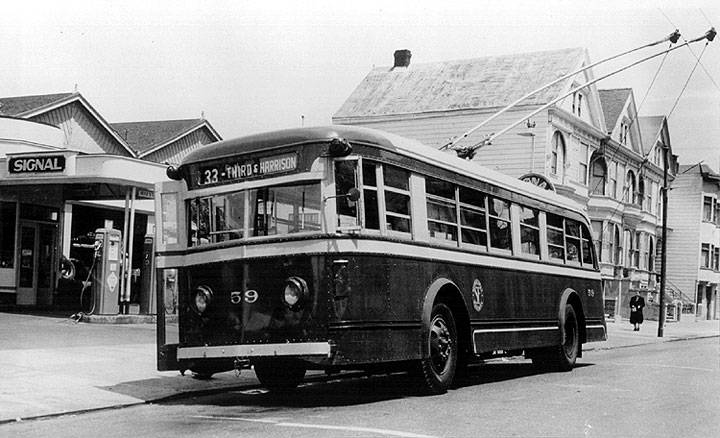