The Digger Concept of 'Free'

by Peter Coyote, excerpted with permission from his book "Sleeping Where I Fall"

Peter Coyote on "The Free Store"

The original Digger movement began in England in April of 1649. Oliver "Ironsides" Cromwell, executioner of King Charles I, was now the protector of the empire. Cromwell had participated in the great insurgency that established constitutional monarchy in Britain. For many of his followers, however, this was not enough, and Gerrard Winstanley, a London cloth merchant and dissenting Christian, published a pamphlet, Truth Lifting up Its Head Above the Scandals, which established what became the basic principles of anarchy: that powercorrupts; private property and freedom are mutually exclusive; and only in a society without rulers can people be free to act according to their consciences. His pamphlet The Law of Freedom in a Platform was dedicated to Cromwell.

Winstanley declared that the English civil wars had been fought not only against the king but against the great propertied lords as well and that since Charles had been executed, land should be made available to the very poor. To that end, he led a group of his followers to St. George's Hill, Surrey, to "dig" and cultivate the common land.

Food prices had reached record heights in the 1640s, and the number of Diggers very quickly doubled, alarming the Commonwealth government and local landowners. The Diggers were attacked by angry mobs, their spades taken, their crops destroyed, and their houses and carts burned. They were harassed by various legal means as well, but they abjured the use of violence. Though Winstanley's group was destroyed and he himself disappeared from political life except as a pamphleteer, the principles he espoused remained vital in English Protestant sects and became part of the basic tenets of the socialist tradition. 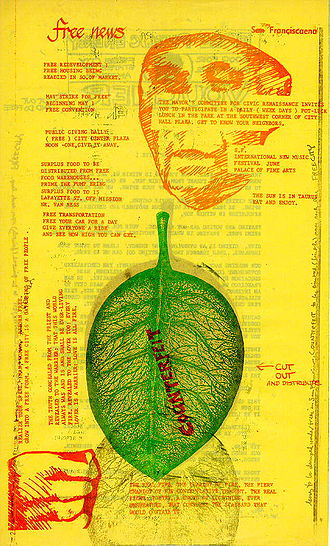 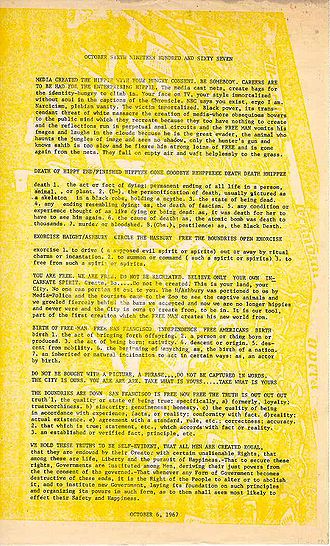 Diggers Free City News proclaiming the "Death of Hippy" on October 6, 1967, courtesy "The Digger Archive"
The San Francisco Diggers originated in the conjunction of the visionary acuity of Billy Murcott, a reclusive childhood friend of Emmett Grogran’s, and Emmett's own genius as an actor and his flair for public theater. Billy had intuited that people had internalized cultural premises about the sanctity of private property and capital so completely as to have become addicted to wealth and status; the enchantment ran so deep and the identity with job was so absolute as to have eradicated inner wildness and personal expression not condoned by society. A quiet, stooped, curly-headed man with a perennially wistful expression and the ability to be completely invisible in a gathering, Billy read voraciously and spent long hours by himself, driving a cab and thinking. (Eventually he became a diamond cutter. Who knew?) 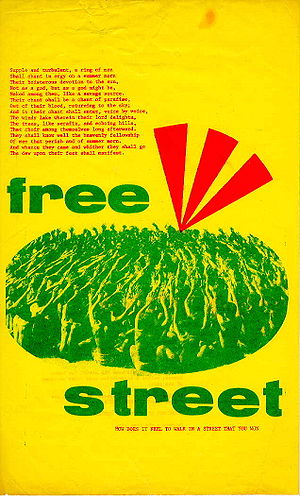 Diggers Free Street, courtesy the "Digger Archive"
To be free, as Billy understood it, was the antidote to such addictions. For most people the word free means simply "without limits." Harnessed to the term enterprise, however, it has become a global force, intimating limitless wealth; as such it is the dominant engine of US culture. The belief that vanquishing personal and structural limits is not only possible but necessary to successful living is so integral to American ways of thinking that assertions to the contrary are regarded as heretical. In fact, personal freedom, as it is colloquially understood, has lots of limits: it limits aspirations (to adult adjustment, for instance), creates continual cultural and economic upheavals, forces relentless adjustment on an overstressed population, ignores biological and social principles of interdependence and reciprocity, violates the integrity of the family and community, exhausts biological niches, and has strip-mined common courtesy and civility from public life. Freedom within the relentless pressures of a market-driven society appeared impossible precisely because of its stultifying effects on the imagination in all realms but the material. From our point of view, freedom involved first liberating the imagination from economic assumptions of profit and private property that demanded existence at the expense of personal truthfulness and honor, then living according to personal authenticity and fidelity to inner directives and impulses. If enough people began to behave in this way, we believed, the culture would invariably change to accommodate them and become more compassionate and more human in the process. There were two important corollaries to this assumption. Since we were all products of this culture and often could not be certain whether our impulses were truly self-generated and not unconsciously conditioned, we expanded the idea of freedom to include, first, anonymity (freedom from fame) and, second, freedom from money as both a clear dividing line between us and the majority culture, and as a test of our integrity. By eschewing payment and credit for what we did, we tried to guarantee that personal acts were never unconsciously predicated on the desire for fame or wealth. After all, if we were getting rich and/or famous from our activities, it would be hard to say that we were doing them for free.

Our hope was that if we were imaginative enough in creating social paradigms as free men and women, the example would be infectious and might produce self-directed (as opposed to coerced or manipulated) social change. People enjoying an existence that they imagined as best for them would be loath to surrender it and would be more likely to defend it. If this were to occur en masse, it would engender significant changes in our society. 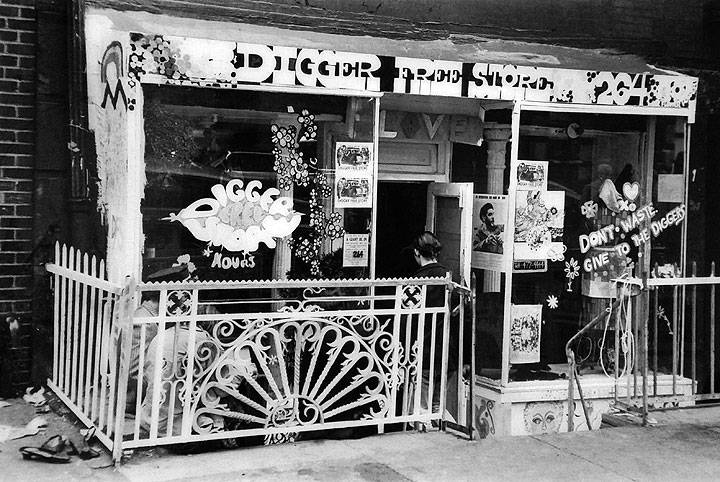 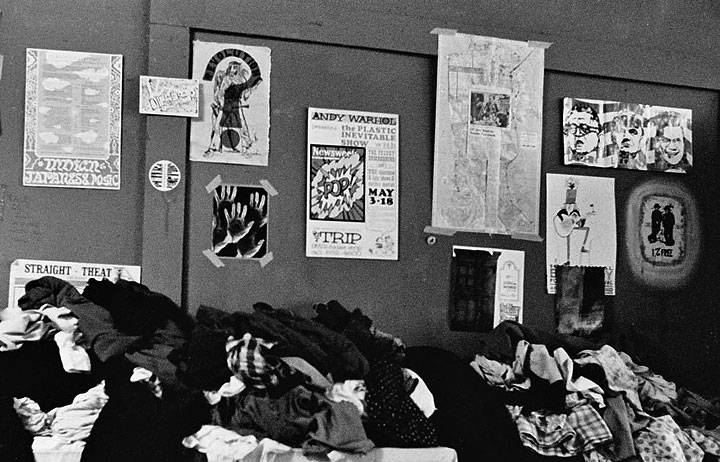 Close-up on a wall in the above collage. 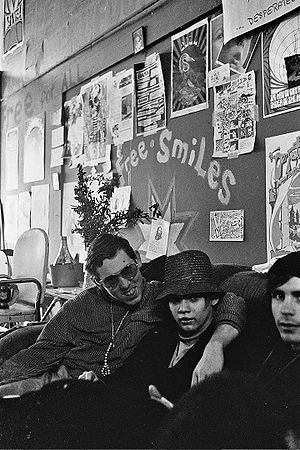 Hanging out at the Free Store; Photo: © Chuck Gould, all rights reserved.
From the Digger perspective, ideological analysis was often one more means of delaying the action necessary to manifest an alternative. Furthermore, ideological perspectives always devalue individuals and serve as the justification to sacrifice them when the ideology is threatened. As a case in point, consider Robert McNamara, sacrificing a generation of youth in Vietnam after concluding that the war was pointless, because he did not want to tarnish the dignity of the nation's leaders by criticizing them. We used to joke among ourselves that the Diggers would be "put up against the wall" not by the FBI or other forces of domestic oppression but by our peers on the Left who would readily sacrifice anyone who created impediments to their power and authority.

I remember vividly the first day in 1966 that I went to the Panhandle with Emmett to visit the Digger Free Food. Hearty stew was being ladled out of large steel milk cans and dispensed to a long line of ragged street people. Each portion was accompanied by a small loaf of bread resembling a mushroom because it had been baked in a one-pound coffee can and had expanded over the top to form a cap. The morning fog stung my cheeks, and my senses were sharpened by the spice of eucalyptus in the air. Emmett and I stood to one side. The line of waiting people, clutching their ubiquitous tin cups, passed through a large square constructed from six-foot-long bright yellow two-by-fours: the "Free Frame of Reference." In order to receive a meal, one stepped through and received a tiny yellow replica about two inches square, attached to a cord for wearing. People were encouraged to look through it and "frame" any piece of reality through this "free frame of reference," which allowed them a physical metaphor to reconstruct (or deconstruct) their worldview at their own pace and direction.

Emmett asked me if I'd like something to eat, and I said, "No, I'll leave it for people who need it." He looked at me sharply. "That's not the point," he said, and his words pried open a door in my mind. The point was to do something that you wanted to do, for your own reasons. If you wanted to live in a world with free food, then create it and participate in it. Feeding people was not an act of charity but an act of responsibility to a personal vision. 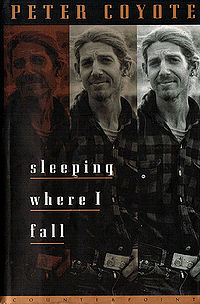 Excerpted with permission from "Sleeping Where I Fall" by Peter Coyote, published by Counterpoint, Washington, D.C., 1998