By the 1970s scores of prisons across the country published inmate-run papers.

From the San Quentin News Archives

Prison journalism as an enterprise began in the 1880s, when progressive prison reformers demanded a new focus on rehabilitation within jails, rather than merely housing people for punishment. The first experiment with prison newspapers was implemented by leading reformist warden Zebulon Reed Brockway in Elmira, New York who published the Summary in Nov. 29, 1883. 90 years earlier, the first inmate-created newspaper in the United States, Forlorn Hope, was published on March 24, 1800 by William Keteltas, a highly educated attorney who was serving time in prison for debt.(1)

Within five years of publication of Brockway’s 1883 paper, numerous other prison papers had emerged, with wardens nationwide supportive of this new endeavor.(2) By the 1950s, prison newspapers had grown into an “important cultural institution of prison life,” as prisons across the country boasted inmate-run papers. With the advent of the prisoners’ rights movement in the 1970s and 1980s, these papers took on a new aggressiveness as inmates pushed the boundaries of the types of stories and critiques they would publish. Ultimately, this aggressiveness led to the “slow death” of prison papers in following decades, largely due to prison officials’ fears about giving politicized inmates such great latitude to publish stories on controversial topics.(3)

The News from San Quentin 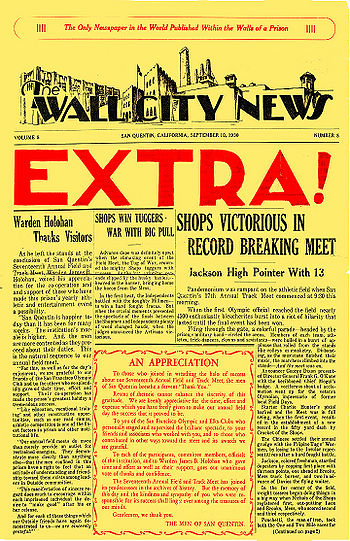 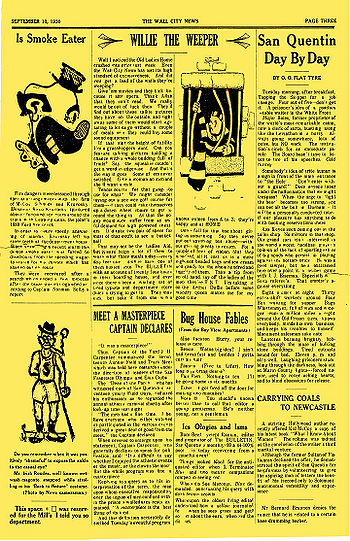 From the San Quentin News Archives

The Wall City News, the first newspaper published from San Quentin Prison, appeared in the 1920s. The Wall City News, which claimed to be “The Only Newspaper in the World Published Within the Walls of a Prison,” ceased publication in the mid-1930s.(4) One issue, from Sept. 10, 1930, offers a four-page spread, featuring stories mainly on sports and general prison life. High quality black and white illustrations are strewn throughout the paper.(5)

By the 1970s scores of prisons across the country published inmate-run papers, but by the end of the decade, many had been shut down, as wardens were fearful of losing control of content. At San Quentin it was no different. According to Steve McNamara, one of the newspaper’s main advisors, the San Quentin News was shut down in the 1980s during a period when prison papers were cut nationwide following court rulings that prison officials could not broadly censor articles simply because they didn’t like them.(7) Wardens needed a legitimate prison interest, like security, to censor a piece. As inmates found themselves winning battles in courts over what they could publish, prison officials decided to cease publication of the papers.(8)

In 2008, Robert Ayers, Jr., San Quentin’s progressive warden at the time, approached McNamara and another advisor to revive the paper. Ayers wanted the paper to be a “vehicle of information that would dispel prison rumors and gossip, which interfere with a safe living environment.”(9) 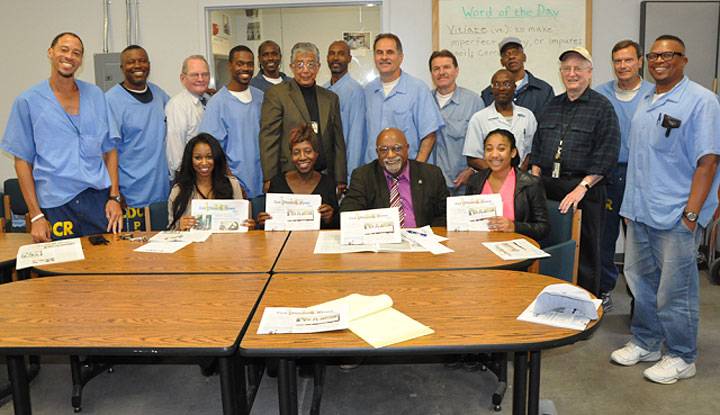 Today, the San Quentin News is one of few inmate-run newspapers in the country, and the only one in California.(10) The 20-page monthly newspaper is distributed to more than 11,500 readers, including inmates, correctional officers, and staff at 17 other California prisons.(11) At any given time, there are around 15 men working on the paper’s staff, performing various jobs, including page editing, layout design, management, reporting, or copyediting.(12) The men’s activities are supported by outside volunteers, many of whom are current or former professional journalists and whose financial costs are made possible through private donations to a non-profit established to support the paper, the Prison Media Project.(13) The newspaper is made possible by donations and grants from foundations, including the Annenberg Foundation, the Marin County Foundation, and RESIST.(14)

The paper serves many purposes. It is a tool for rehabilitation for San Quentin prisoners, as well as an opportunity for them to build skills and experiences that they can use after their release (although some of the paper’s staff are serving life sentences without the possibility of parole). The paper is also a service to the public, as it covers both local and national news related to criminal justice, prisons, and policing by men who have close personal experience with all three, which is often not the case with reporters at traditional outlets.(15) The paper is impressive in its scope and complexity. The newspaper’s writers consistently display an impressive knowledge of serious issues related to criminal justice and the prison system as well as a willingness to engage with them in a critical and unbiased manner. In general, issues feature a wide array of content, including straight news on national, state, and prison policy issues, coverage of arts and culture, editorials, and sports — a particularly popular section for men in prison.(16) The paper “gives people that opportunity to reclaim their own voice,” says Richard Lindsay, a former staff member of the San Quentin News. “They’re empowered to say something about the system that’s confining them and they do it very well, very responsibly, in a factually [accurate] way.”(17)

The San Quentin News is a group effort overseen by Arnulfo Garcia and Juan Haines.(18) A staff position on the newspaper is seen as a “prized” work slot, according to McNamara. All inmates are assigned to a specific job in prison, whether it be working in the kitchen or sweeping floors. The men on the newspaper are considered to be some of the “best” inmates in San Quentin with privileges such as their own office within the prison, a television, and access to computers (although not the internet). In addition to pieces from staff writers, the newspaper also publishes work from the prison’s Journalism Guild, a group of inmates who are beginning journalists taking classes and learning the basics of reporting. A lucky few in the guild go on to “graduate” into positions at the San Quentin News.(19)

Although reporters are generally given freedom to publish stories on a wide range of topics, including prison hunger strikes, and transgender inmates, there are limits to their coverage. In early 2014, for example, prison officials temporarily shut down the paper for 45 days after one picture was swapped for another similar, but unapproved picture. Staff writer Watani Stiner discussed the incident in a column, writing that, “We are once again reminded that we are prisoners first and journalists second.”(20) Still, there is “not a lot” of censorship according to McNamara, the advisor. “[Inmates] are smart enough to avoid coverage that would infuriate administration,” he said. McNamara added that the paper is “wonderfully well-represented” by San Quentin’s Public Information Officer Sam Robinson, who serves as its main official advisor.(21)

Perhaps unsurprisingly, the paper holds enormous significance to the men who produce it. In interviews, multiple former inmates said that the paper gives them a sense of purpose under difficult circumstances. “When people are incarcerated, they’re stripped of all identity and stripped of voice. It’s a very disempowering process being sent to prison, very intentionally,” says Lindsay. “I think it increases a person’s self-esteem by being given that. It gives them voice and a sense of agency in a way.”(22) One former sports editor, Gary Malachi Scott, said that working on the paper taught him how to write, report, research, and interview. After joining the paper, Scott was published in a range of professional publications, including the New York Times.(23) “I thought it was exciting like I had some form of identity,” Scott said of his time on the paper. “Being able to do that gave me a sense of identity, and gave me a skill that no one could take away from me. It was my passion.”(24)

One outside volunteer is William Drummond, a professor at the UC Berkeley Journalism School who has been bringing Berkeley students to help edit the paper since 2013. Drummond saw the partnership as an opportunity to teach journalism students how to edit, while also giving them the chance to learn how to interact with people who may come from very different circumstances and backgrounds as them. Both undergraduate and graduate students visit the prison once or twice a week to edit stories and interact with inmates.(25)

The San Quentin News has been widely recognized for its work. The Society of Professional Journalists recognized the newspaper for “accomplishing extraordinary journalism under extraordinary circumstances.”(26) It has also been covered by major national news outlets, including the New York Times and the Los Angeles Times.