Roots of a Food Revolt 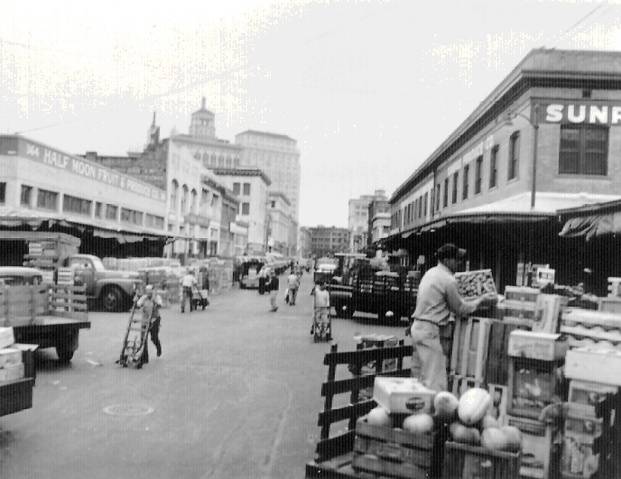 Many backyard agricultural activities shriveled in the consumer frenzy of the postwar years, when mom was recruited out of the war industries and sent to the kitchens and supermarkets to stock up on an ever-exploding market of new processed foods. The "space age" brought an abundance of new food concepts from corporate America, from the ubiquitous TV dinner to the phosphorescent orange glass of "Tang," the drink of the astronauts. It was not uncommon for many to believe that in the future the modern cuisine would consist of a food pill and a glass of water. But in the belly of America, a rumbling was starting to be heard.

The beginnings of the great refusal of All-American cuisine lay in the social upheavals of the sixties, in which San Francisco played a major role Many forces converged to produce this refusal:

• The realization that despite our reputation as the wealthiest nation on earth, many of our citizens still went hungry, brought to the attention of many by the 1962 publication of Michael Harrington's The Other America. America's notorious food-wasting sharply contrasted with the mid-60s famine in Biafra and other war and poverty-wracked nations, brought into people's homes by mass media.

• The revelation that America's food sources were saturated with fungicides, chemical fertilizers and pesticides provoked widespread fear, particularly after the publication of Rachel Carson's The Silent Spring in 1962. Many questioned the basic assumption that science and technology were beneficial to food production, while some were inspired to re-evaluate traditional techniques of agricultural production.

• The anti-colonial awakening of the Third World countries, and the rise of nationalist consciousness amongst people of color in the United States created a surge of interest in cuisine's from the "underdeveloped" nations, often foods with greater nutritional value that cost less (and tasted better!). Third World staples like beans and rice, curries, tofu, millet, bean sprouts, and whole grains and raw vegetables began to take their place in the kitchens of San Francisco's communes, collectives, and group households. Chopsticks began to displace the fork and knife as the culinary tool of choice. Added to this consciousness about food consumption was the re-discovery of alternative methods of agriculture, in particular the non-exploitative and more earth-friendly horticulture of Native American and Asian cultures.

• Corporate greed was made glaringly apparent in the struggle between the field workers who harvest America's food and giant agribusiness corporations like Tenneco and Dow Chemical. The struggle of Cesar Chavez and the United Farm Workers Union in the 1960s to improve basic working conditions in the rich agricultural valleys of California reminded city-dwellers where their food came from. The UFW helped dispel the popular, bucolic myth of the small family farmer and unveiled the grim reality of the "factories in the field."

• A growing movement for vegetarianism was sparked by new understanding about the sentient qualities of animals plus the growing concern that meat eating was generally unhealthy. Frances Moore Lapp's book "Diet for a Small Planet" (1971) pointed out the link between Western meat-eating and the waste of land and grain associated with it.

All these factors helped to forge an implicit unity on the politics of food--the right to eat nutritious food at an affordable price. By distributing food for free, by organizing food co-ops, and sometimes by theft and sabotage, thousands of San Franciscans contributed to building an alternative to "white bread" America.