Difference between revisions of "Redevelopment Hits the Haight" 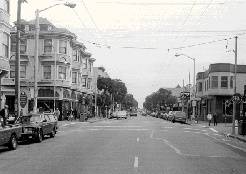 By far the most significant changes in the Haight Ashbury during the 1960s were the result of urban renewal in San Francisco. The first and most massive residential neighborhood subjected to old-fashioned bulldozer urban renewal was the Fillmore Redevelopment Western Addition ("WA"), which is the immediate northern neighbor of the Haight.

During this time the Haight became the relocation site for blacks displaced from the Western Addition. The first set of those displaced people, the black property owners, were people who actually owned buildings in the WA and had received a settlement. Even though the Haight was overwhelmingly white, a large number of black people came and lived immediately adjacent to the Haight, and there were not any major problems during that period.

Early on, by 1964-65, substantial portions of the northern Panhandle portion of the Haight-Ashbury, that area between Fulton and Fell, and the area immediately south of the Panhandle on Page Street had become black neighborhoods. By 1967, the simple majority of property owners between Baker and Stanyan on Page Street, the people who owned those duplexes and triplexes in between the larger buildings on the corners, were working class black families.

The city was changing, and the Haight was beginning to reflect those changes by the mid-60s. Lowell had moved to its new campus by the late 60s, Polytechnic High School was declared seismically unsafe, and plans were drawn to build a new high school. Promises were made that it would be built somewhere between Haight-Ashbury and the Western Addition, but instead McAteer was built on the other side of Twin Peaks, severely disappointing local activists who had worked on the plans.

There was no rent control in SF in the 1960's; it was basically a real estate, landlord-oriented town. There was no SF Tenants Union or anything else, though there was increasing hostility between blacks and hippies over landlord-tenant issues---hostility which threatened to erupt in violence. In one very serious case, 12 units were lost in a suspicious blaze.

Folks at a place called 409 House, formally known as the Ecumenical Ministry to the Haight Ashbury, an adjunct of the Episcopal Church, were sent to minister to the spiritual needs of the young people on the street. Young trendy Episcopalian priests soon realized that it wasn't spirituality that was needed, but safe havens, a walk-in center and some assistance on housing and health care.

In 1967 a symbiotic relationship between the Haight Ashbury Free Medical Clinic and what is now known broadly as 409 House developed. 409 House attended to the physical and housing needs and the Free Clinic to the health needs.

This was not a happy place, not a good place to be as a 15-year old. No less an observer of the 60s than the light-headed Beatle, Paul McCartney, on his first visit to the Haight was reported to have said, "My God, there's nothing but sharks out there!"

Everybody was talking peace and love, but everybody was ripping each other off. Manson's Mansion Charlie Manson got his start in the Haight Ashbury in 1968, a very dangerous place to be. One of those dangers was the lack of shelter, lack of housing.

One of the first organizing activities that 409 House got into, other than creating the first walk-in center, was to try to develop some sort of housing policy. Which meant trying to deal with landlord-tenant issues, made more complicated by the fact that the overwhelming majority of tenants were white, and in the problem properties, the overwhelming number of landlords were black, so there was a double-bind that challenged what was called the Tenants Action Group (TAG) which became active in late 1969.

From a lecture by Calvin Welch at New College in Fall, 1994.

The Medical Industry Prev. Document  Communes and Housing Next Document