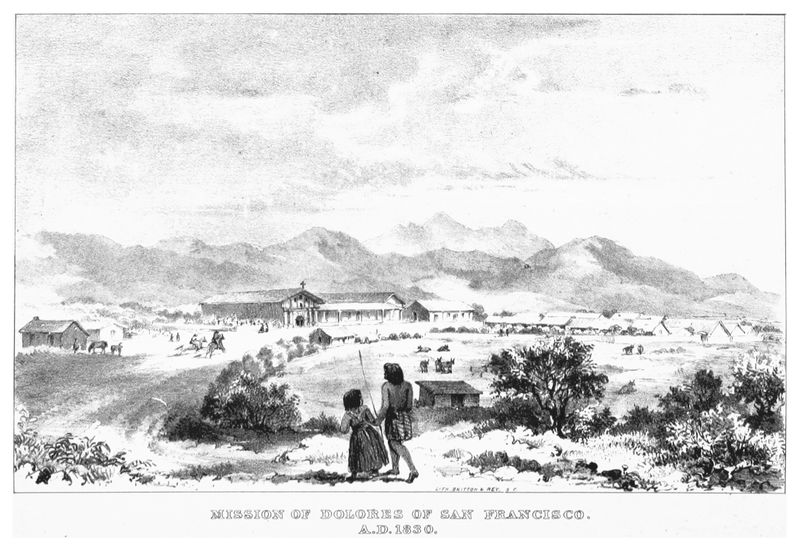 In a measure designed to reduce the power of the church and open the rich mission lands to colonization, the Mexican Congress passed a secularization bill in August 1833. Advocates of the law could point out that more than fifty years of the friars’ teaching—the inculcation of Christian civilization and the rudiments of agriculture and industry—could be considered adequate to prepare the Indian converts for self sufficiency. At each of California’s twenty-one missions, an administrator “would give to every adult male Indian a tract of twenty eight acres; his fair share of one half of the domestic animals and tools of the Mission.”(24) The appearance of liberality, however, only thinly concealed the wholesale looting of mission property, as the departing friars and newly appointed administrators strove to prevent each other from self-enrichment by appropriating what they could. Between the announcement of the new policy and the appointment of the local administrator, the 5,000 cattle at Mission San Francisco de Assisi were driven away, while the few remaining Indians simply walked away.

The secularization of the missions set off a wave of Mexican land grants in California under a process that dated back to an 1824 law, the Law of Colonialization. The procedure was a simple one in which the petitioner asked the governor of Mexico for a specific tract of empty land. This written request was frequently accompanied by a diseño, or map, prepared locally by a rough ground survey. If the petitioner had performed some service for the government, such as being part of the army, the claim was generally granted. Since the act aimed to encourage settlement, land grants were made to petitioners of foreign origin as well, provided they formally adopted both the Catholic faith and Mexican citizenship; many of these petitioners married the daughters of Mexican families.

The 1824 law set a legal maximum of 48,400 acres, and the average ranch was about 22,000 acres. If the land was irrigated by fresh water, no one person was allowed more than 4,400 acres—as was the case with Bernal’s Rancho at Islais Creek and Hunters Point. Under the original law of 1824, lands owned by the mission were not subject to petition, but with the 1833 secularization act much of California’s most valuable land was free to be awarded to colonists. They had only to qualify and agree to fence the land, erect permanent dwellings, and protect the rights of previous inhabitants (that is, the Indians), who became free labor for the rancho owners. From 1834 through 1845, 95 percent of the great California ranchos were created.(25) 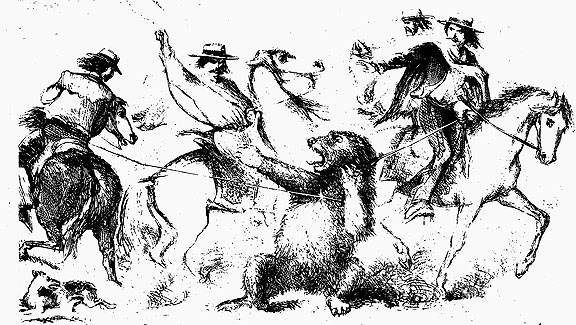 The bear hunt. “The king of all sports in California is the bear-hunt. . . Each rider now uncoiled his lasso from its loggerhead and held it ready to spring from his hand, like a hooped serpent from the brake. The bear . . . plunged from the thicket. . . and was leaping, with giant bounds . . . for the dark covert of the forest beyond . . . one looped him around the neck and brought him to a momentary stand. As soon as bruin felt the lasso, he growled his defiant thunder and sprung in rage at the horse. . . The horse knew as well as his rider, that the safety of both depended on his keeping the lasso taught . . ." From the journal of Walter Colton, a navy chaplain who became alcalde of Monterey in 1846.(26) 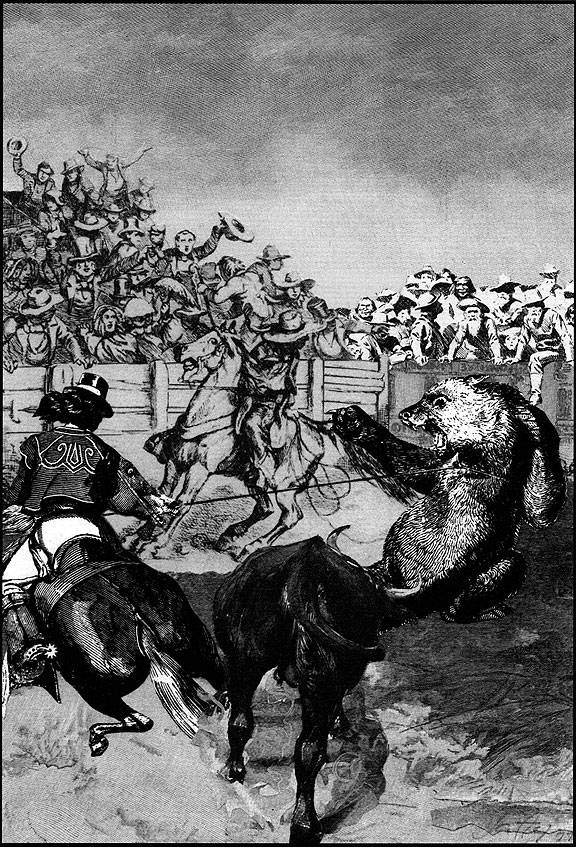 Both the Bernals and the de Haros were gente de razon, or people of reason (in contrast to the Indians, believed to be without reason). By 1840, H.H. Bancroft estimates, there were no more than 800 gente de razon at San Francisco, Sonoma and the Peninsula. Large families with twelve to fifteen children were usual, a fact that some foreign observers attributed to the miracle of California’s fecund climate. In less than a generation most of the gente de razon were related.(27) 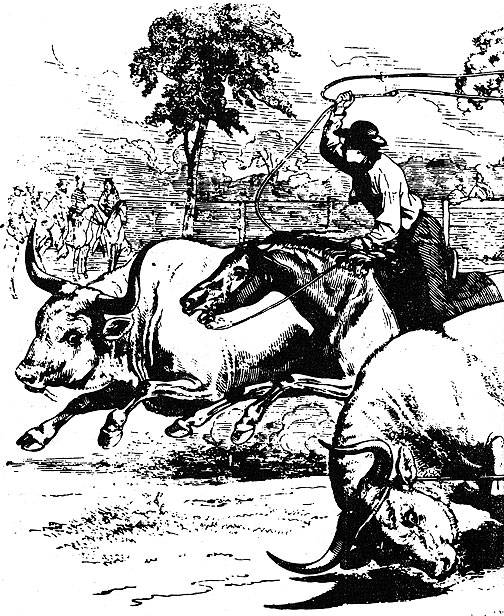 Vaqueros lassoing cattle. “All of the cattle were branded, and each rancho had ear-marks. . .Owners of adjoining ranchos came to the rodeo grounds to select their own cattle and brought with them their own vaqueros who went in and picked out the cattle belonging to their special ranchos. The work of separating the cattle, while a necessity, was really more of an amusement than a labor. . . it was an opportunity to exchange greetings and talk over affairs.” —William Heath Davis, Sixty Years in California, 1831 to 1889.

Accounts of rancho life written during this period generally agree on the simplicity of rural Mexican-Californian life. A typical passage by Walter Colton, alcalde of Monterey from 1846 to 1849: “There are no people I have ever been among who enjoy life so thoroughly as the Californians. Their habits are simple; their wants are few; nature rolls almost everything spontaneously into their lap. Their hospitality knows no bounds. . . always glad to see you, they only regret that your business calls you away.”(28)

But all was not so peaceful as most accounts would have us believe. John Vioget’s tavern, the only public house in Yerba Buena village in the 1840s, became the center for drunken brawls between Mexican-Californians and outsiders. Jose C. Bernal was called up several times in two years for drunken fights and knife stabbings. The de Haro twins were sentenced to serve six months in jail in San Jose for wounding Captain Elliot Libbey, master of the bark Tasso, who had made advances to a young lady much beloved by “Chico” de Haro. These incidents (recorded by the juez de paz) demonstrated that Mexican-Californians were not able to accept with equanimity the idea that Yankees appeared to be in California to stay, to marry their daughters and settle on their land.

Both Jose C. Bernal and Francisco de Haro served the Mexican government in the army. Bernal was a soldier at the presidio, born of a soldier, Juan Bernal, who had accompanied Anza to Monterey in 1776. Both father and son were stationed at the presidio and both kept cattle and sheep as a second occupation. Bernal’s first petition to the Rincon de las Salinas y Potrero Viejo (“the corner of the salt marsh and the old grazing lands”) was rejected on grounds that the land was common grazing land, but he persisted and his claim was confirmed in 1840.

Francisco de Haro was a relatively educated man in a society where few could read or sign their names. He had served as personal secretary to Governor Arguello, was alcalde of Yerba Buena in 1834 and again in 1838-39 when he assisted Vioget in surveying the village. De Haro’s twin sons, Ramon and Francisco, were “empowered to occupy provisionally the piece of land called Potrero de San Francisco to the extent of half a square league” (2,288 acres of land near the mission and Mission Bay).(29)

But an ugly incident was to mark the end of an era. Occupation by the de Haro boys was to be very short; born in 1827, they died in 1846 at the moment their country became part of the United States. It was at the time that John C. Fremont, accompanied by Kit Carson and a band of Americans, determined to seize Sonoma as his part in the United States’ takeover of California. In retribution for an earlier murder of two Americans, the twin boys were shot, along with their uncle, Antonio Berreyesa. The news of the twins’ death came as a great shock to Francisco de Haro, who died on New Year’s Day, 1849; his death attributed to his grief. (30)

After raising the American flag at the Customs House in Monterey on the morning of July 7, 1848, Commodore John Sloat promised the assembled Mexican-Californian population, “All peoples holding titles to real-estate, or in quiet possession of lands under color of right, should have their titles and rights guaranteed to them.” (31) By July 11, acting under Sloat’s orders to Commander John B. Montgomery, the American flag flew over San Francisco and, to the north, over Sonoma and Bodega. American possession of California was a fact, and Sloat’s promise to the Mexican-Californians lay on the future of the land.

Meanwhile the government in Washington had directed General Stephen W. Kearny to establish a temporary civil government with himself as provisional military governor. The limits of Kearny’s authority were at once sweeping and vague; his charge was to maintain order.

The general stretched that authority when, on March 10, 1847, he proceeded to “grant, convey and release to the town of San Francisco, all title of the U.S. in beach and water lots between Fort Montgomery and Rincon Point. . . The lots released were to be sold at auction for the benefit of the town.(32) The concept established by Kearny’s action shaped the future of South Beach and Mission Bay: California real-estate under water could be auctioned to keep San Francisco financially afloat and water lots were investments in the future.(33)

This is chapter three of "Vanished Waters: A History of San Francisco's Mission Bay" published by the Mission Creek Conservancy, and republished here with their permission.