--by Will Roscoe, originally published in Processed World #8, in 1983 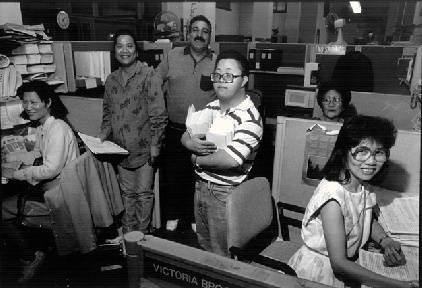 Being a temporary office worker occasionally gives me interesting opportunities to learn about the inner workings of the corporate world. I recently finished a temporary assignment at Blue Shield of California where I had the opportunity to learn some very interesting things indeed.

From December, 1980 to April, 1981, the OPEIU led a strike against Blue Shield. In September, 1982, Blue Shield announced plans to move operations out of San Francisco and, in the process, fire its entire clerical staff and break the union. Based on files I saw, memos I typed and conversations I overheard, I can offer the following confirmation and elaboration of PW's critique of the OPEIU approach.

Overt & Covert Reasons for the Relocation

Blue Shield is in some ways unique among service sector industries. Technically, it is a non-proft organization. That fact, combined with the competitiveness of the health insurance industry, means that Blue Shield has little opportunity to create “working capital” which can be invested in long-range plans or operational improvements. “Doing it as cheap as possible” is the corporate philosophy. This is typical of the non-profit management mentality. No matter how liberal their programs may be, non-profits provide notoriously bad wages and working conditions.

So Blue Shield grew, and as data processing and clerical functions became increasingly complex, the various clerical departments multiplied without rationalization or planning. The whole realm of “management support” functions is nearly absent at Blue Shield training, operations standards, work-flow monitoring, etc. The clerical jobs themselves are so complex as to defy belief. Blue Shield seems to have finally recognized this by allowing for more than three months of training for the employees to be hired at the new location. The current clerical staff never received training this extensive and if they had their jobs would have been more tolerable.

As a result of this spontaneous, unplanned growth, Blue Shield management literally did not know what was going on within their own bureaucracy. The knowledge of how to process claims and all the other paperwork was in the heads of the workers, undocumented in any other form. A good number of these workers are Asian and Black women and from Blue Shield's point of view, they have a “communication problem,” either because English is not their native language or because they speak a different dialect. So the critical storehouse of operational information that Blue Shield workers had was even more inaccessible to management.

Blue Shield finally appreciated this vulnerability at the time of the strike in 1981. Consequently, the motivation behind the relocation has to be seen as not merely to break the union. It is also part of a concerted effort to establish full management control over clerical production and thereby end the dependence of management on worker knowledge. One part of this involves more training, supervision and standardization of procedures. A second part, of course, involves getting rid of the current workers.

But in this light, the relocation has to be looked at more closely. Gaining control over clerical functions means that the “communication problem” has to be overcome. That is, of course, communication FROM Blue Shield TO workers. Blue Shield needs workers who will receive and conform to management controls, who will follow management's standardized procedures and not their own. Not only unfamiliar with specialized corporate jargon, the workers may be equally unfamiliar with corporate thinking patterns, that is, the skills of abstract, objective thinking. What is involved in translating years of job experience into standard procedural language may not come easily to those who have not spent 16 years in the American system of education. A Third World clerical worker may know very well how to do a job, but not have the particular language skills to put it into words or writing.

So addressing the “communication problem” boils down to getting rid of workers who cannot conform to this use of the English language, which of course means minority workers. Blue Shield wouldn't necessarily have to fire all minority workers if it was willing to pay higher wages to attract non-white workers who've been through the American public education system. But Blue Shield wants to retain its “cheap as possible” philosophy and so has addressed the language problem without paying higher wages.

To do that, Blue Shield had to find a white labor market willing to accept its wages. This is why Lakeport, a resort town on Clear Lake, has been chosen as the site of the relocation. Blue Shield's intent is clear. While there are bigger California cities with a largely white work force (say, Sacramento or Redding), only a small town could provide both white workers AND a depressed level of wages.

Blue Shield's relocation is not only motivated by an anti-union ideology, it is clearly racist as well. I found this conclusion continually reinforced during my time at Blue Shield by managers who made references like “THE Filipinos” and told bald jokes based on mimicking Asian accents.

How the Union Helped Blue Shield Bust the Union

“We learned a lot during the strike” is the comment I heard Blue Shield managers make.

What Blue Shield learned was all the detailed job descriptions that had previously been “in the heads” of the workers. Blue Shield used the four months of the strike to begin developing a management system to end this dependence. Without the strike, Blue Shield would never have been able to fire its workers and move out of San Francisco because until the strike Blue Shield managers had no idea how to run their business.

The OPEIU never seemed to appreciate this source of worker leverage, nor did it understand how the introduction of rationalized management controls would undermine the workers’ position. In fact, the union’s own bureaucratic approach contributed to the standardization process. Unionization provided both the incentive and the means for Blue Shield to rid itself of its SF workers.

Even after the relocation was an-nounced the union might have been able to obtain concessions by adopting a stand of “non-cooperation” that would have made it more difficult for Blue Shield management to extract all the information needed to effectively set up operations in the new location. But, needless to say, it did not do so. Nevertheless, some workers on their own are apparently engaging in uncoordinated forms of non-cooperation. Records and data are being intentionally “fouled up.” Blue Shield managers blame the union, of course, but that's not only unfair to the union which has never endorsed such tactics, but unfair to the workers as well, who have undertaken these activities on their own creative initiative in defiance of both management and union authorities.

Another source of worker leverage was also left unexplored by the OPEIU. The same poor management (by corporate standards) that allows workers at Blue Shield to consolidate operations knowledge, also results in fiscal losses of hundreds of thousands of dollars every year (according to estimates I overheard). In the absence of adequate controls, losses due to errors and fraud are rampant.

For most corporations today, controlling quality, costs and losses is the “profit edge.” One would think that Blue Shield's penny-pinching managers would shudder at these losses. But in fact, their own “cheap as possible” philosophy is the cause of these losses.

The union might have been able to do something with this issue by taking advantage of the unique position that workers had because of their knowledge of operations. Today many companies are using the Japanese “quality circle” programs to tap the knowledge of their workers by teaching them a few basic management techniques that they can use to solve on-the-job problems. What if the Blue Shield union took this initiative themselves, retaining worker control of job knowledge by introducing quality circle concepts itself? The concession from management would have to be the distribution of recovered losses in the form of wages and benefits to workers, and possibly, worker representation on Blue Shield's board of directors.

That, of course, raises the debate over worker self-management. Rather than delve into that here, I will just point out the one way the issue of Blue Shield mis-management could have been used by the OPEIU that circumvents the self-management issue.

Normally consumers couldn't care less whether a company is well managed or not when they decide to buy one of its products. But in the case of health insurance, consumers are aware that the cost of their coverage is based on risk tables which are pretty much standard for the insurance industry, PLUS the cost of administrative overhead. This suggests that Blue Shield customers would have just as big a stake in seeing losses controlled as do the underpaid workers of Blue Shield. If the union addressed this issue, it would be aligning itself directly with consumer interests and raise the possibility of a new alliance that increased worker leverage.

But of course, the OPEIU took a typically short-sighted stand in regards to the whole area of quality control and management productivity plans. That is, they simply opposed them outright. This position pretty much eliminates workers from playing a role in this crucial area of their jobs. It falls, by default, into the prerogatives of management. And inevitably management will find ways of pre-venting losses and keeping the profits for themselves, leaving workers with the yoke of ever increasing supervision and productivity standards over which they have no control.

The real nature of corporate “communications” — the jargon, policies, procedures, manuals and training programs -- needs to be understood as a means of subverting worker power by instituting a form of language control -- which is to say, thought control. When this occurs in the context of culturally diverse office workers, this has to be understood as inherently racist. Management preoccupation with the “language barrier” translates into the “race barrier” and “communication problems” mean “race problems.” If racism were not involved, corporations might deal with cultural diversity by hiring more minority managers and supervisors and increasing language capabilities throughout their organizations, “covering all the bases” as it were. But racism is, in fact, a clear motivation behind the enforcement of language and communications standards in the corporate world. Fighting these forms of social control on the job is not just a matter of liberal civil rights ideals. Language control not only discriminates against minority workers, it directly undermines worker power. Unions could fight racism and build worker leverage at the same time by putting the “language” issue on their agenda. The possibility of alliances between consumers and service sector workers deserves consideration. People consider things like health insurance, checking accounts, insurance, drivers’ licenses and telephones to be necessities. But there's little “freedom of choice” in obtaining these services. They're typically provided by massive, unresponsive bureaucracies. And these same bureaucratic organizations create alienating and exploitative job conditions for clerical workers.

Above all, the case of Blue Shield reveals the need for a new approach to organizing office workers. The strike tool is no longer effective when modern communications make it possible for companies to locate clerical operations anywhere.