Watch Diego Rivera and his team paint this fresco in a live 15-minute silent movie from the Treasure Island Fair in 1939.

The largest and most complex wall painting that Diego Rivera created in San Francisco is the comprehensive marriage of the themes of Mexican artistry and US technology in Pan-American Unity. Confronted by the untimely removal of an exhibit of Old World Masters on loan for one year at the Golden Gate International Exposition on man-made Treasure Island, architect Timothy Pflueger called on Rivera to return to San Francisco in 1940 to fulfill the art commitment of the second year of the Fair: working in public every day he would paint in ten sections a large fresco to be moved into the library of the new community college campus that Pflueger was designing. After the Fair ended, this Art-in-Action project would be boxed and moved off Treasure Island to the City College campus for installation. 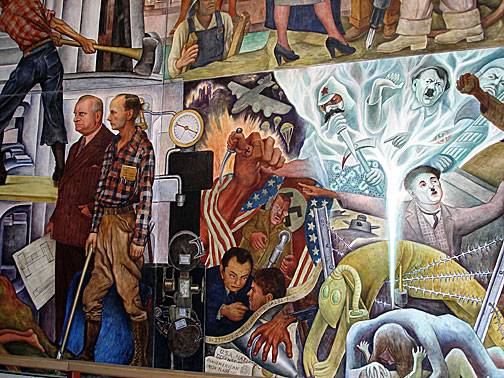 However, fate altered the plans--World War II intervened, Timothy Pflueger died suddenly of a heart attack in 1946, and Diego Rivera of cancer in 1957. Thus it remained to Timothy's younger architect brother Milton Pflueger to determine the ultimate site of the fresco. The ten crated fresco panels had sat for twenty-one years in storage. Then in 1961 Milton Pflueger altered his new auditorium design in order to accommodate them on a bowed-out wall where they remain today in the present Diego Rivera Theater.

The complex composition of Pan-American Unity requires explication--Rivera wrote copious notes on his blending of the arts of ancient Mexico and the technology of modern United States. The composition does not "read" linearly. Rather, on the left-hand side is a half-parenthesis that consists of the brightly colored tail of the feathered serpent Quetzalcozatl flowing from a temple and ending in a stone head which Madronio Magano is sculpturing; a Toltec totem serves as an anchor. At far right are early US pioneers entering a "new and empty land" above the right-hand half-parenthesis formed by a curved gravel conveyor belt, with a wine-press screw as anchor. These two outer border configurations embrace the intensely woven internal scenes. 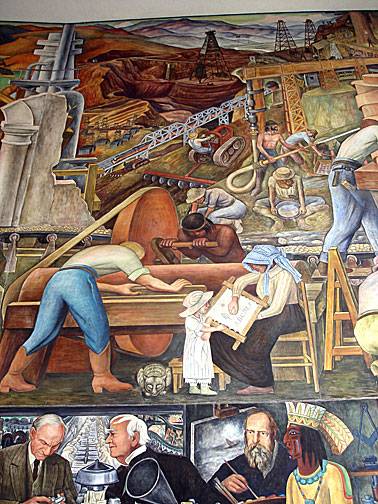 The striking central image, which Rivera called "The Serpent Fanged Machine", is a synthesis of Coatlique, the Aztec Goddess of Earth and Death, and a stamping press from the Detroit Ford Automobile plant. To the goddess, with her symbols of serpents' heads, her skirt of braided serpents, and a human heart and skull, Rivera has appended a large brown hand with four turquoise jaguar spots to halt the tyranny of approaching World War IL Two diving figures (Helen Crlenkovich, a City College diving champion at the Fair) arch away from the central image in either direction, lending a sense of circularity to each half of the composition. The left diver, her body reflected in the fog typical of San Francisco, is superimposed upon the city; beneath her stand two recognizable buildings designed by patron Timothy Pflueger: the 450 Sutter Street Medical Dental skyscraper; and the Pacific Telephone building on New Montgomery Street, both of which have lobbies designed by Michael Goodman. Pflueger also influenced the design of the 1936 Bay Bridge, which here lies behind the goddess figure and links the city to Treasure Island, portrayed at upper right, beneath the second diver. In front of the "serpent-fanged machine" are three portraits of Northwest carver Dudley Carter, with ax: first he carves the big Mountain Ram later the mascot for CCSF; next as a timber cruiser he swings the ax; and finally he holds it standing next to Timothy Pflueger, both "patrons" of the mural. 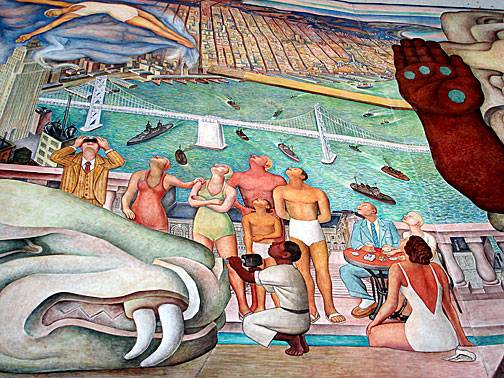 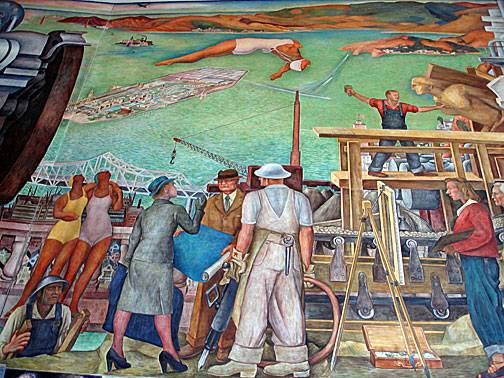 Two types of war balance each other. Rivera shows such figures from wars of revolution, which he admires, as Bolivar, Hidalgo, and Morelos, as well as Washington, Jefferson, Lincoln and John Brown. The balancing gaseous war cloud at right encompasses dictators Stalin (portrayed with blood-tipped pickax as the murderer of Trotsky), Hitler, and Mussolini to represent the onset of World War II, a war that in 1940 he perceives to be totalitarian aggrandizement. 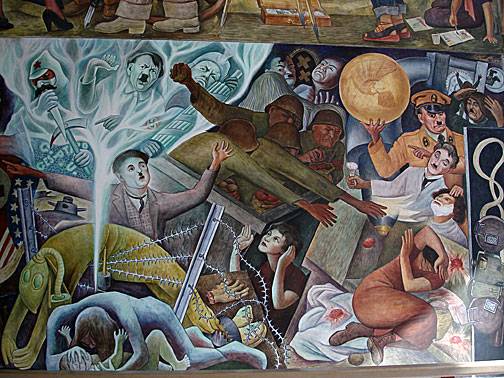 Other portraits depict Frida Kahlo in Tehuantepec dress; Paulette Goddard and Charlie Chaplin in the movie The Great Dictator; Emmy Lou Packard, his assistant; US inventors Henry Ford, and Thomas Edison; American artist Albert P. Ryder; and artist-inventors Samuel Morse and Robert Fulton. In two self-portraits he shows himself first as a fresco painter and then possessor of the Cieba Tree, tree of Life and Love. The three air exhaust vents on a roof have shrunken in size, but the red hand on the pressure gauge has crept dangerously close to explosion. And the imagery of working hands pervades the entire mural. 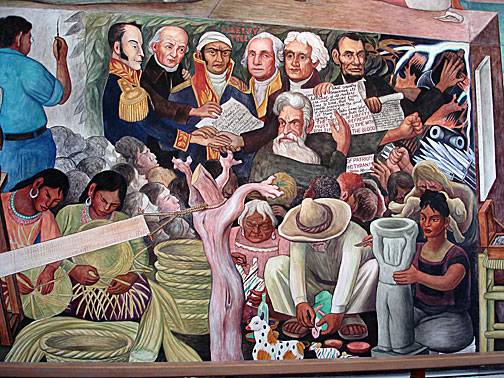 This work is both intricate and monumental. It is an incredible history, both local and universal, with the strong message of our need for Pan-American Unity. Although Rivera himself had training in the best European tradition, including a year in Italy studying frescoes, he here emphasizes two themes of the western hemisphere: art and technology, extending the ideas with which he began at the Stock Exchange in 1930, where he featured California agriculture and industry. Thus, in his San Francisco frescoes within a decade Diego Rivera comes full circle in 1940 with his final work, Pan-American Unity. 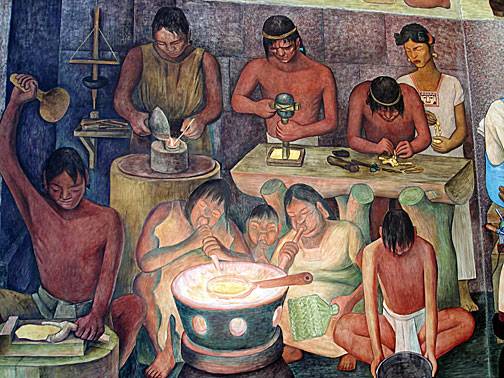 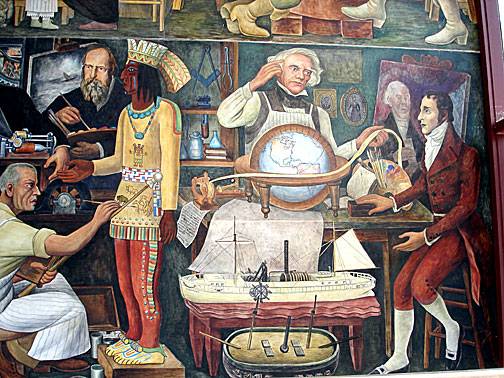