Difference between revisions of "Nuclear Power is No Accident"

This flyer was distributed at the Three Mile Island memorial protest march in April 1979 in San Francisco's Civic Center. 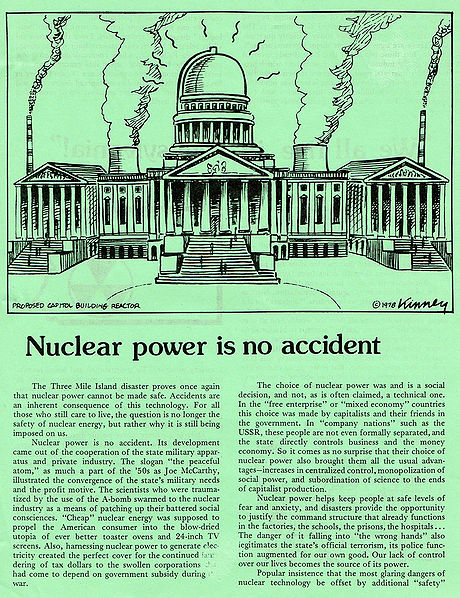 The Three Mile Island disaster proves once again that nuclear power cannot be made safe. Accidents are an inherent consequence of this technology. For all those who still care to live, the question is no longer the safety of nuclear energy, but rather why it is still being imposed on us.

Nuclear power is no accident. Its development came out of the cooperation of the state military apparatus and private industry. The slogan "the peaceful atom," as much a part of the '50s as Joe McCarthy, illustrated the convergence of the state's military needs and the profit motive. The scientists who were traumatized by the use of the A-bomb swarmed to the nuclear industry as a means of patching up their battered social consciences. "Cheap" nuclear energy was supposed to propel the American consumer into the blow-dried utopia of ever better toaster ovens and 24-inch TV screens. Also, harnessing nuclear power to generate electricity created the perfect cover for the continued laundering of tax dollars to the swollen corporations that had come to depend on government subsidy during the war.

The choice of nuclear power was and is a social decision, and not, as is often claimed, a technical one. In the "free enterprise" or "mixed economy" countries this choice was made by capitalists and their friends in the government. In "company nations" such as the USSR, these people are not even formally separated, and the state directly controls business and the money economy. So it comes as no surprise that their choice of nuclear power also brought them all the usual advantages—increases in centralized control, monopolization of social power, and subordination of science to the ends of capitalist production.

Nuclear power helps keep people at safe levels of fear and anxiety, and disasters provide the opportunity to justify the command structure that already functions in the factories, the schools, the prisons, the hospitals. . . The danger of it falling into "the wrong hands" also legitimates the state's official terrorism, its police function augmented for our own good. Our lack of control over our lives becomes the source of its power.

Popular insistence that the most glaring dangers of nuclear technology be offset by additional "safety" features has driven the costs of nuclear energy beyond even those of the long-suppressed solar industry. The profitability of nuclear energy today is highly questionable. There are signs that some major investors are pulling out. But those businesses that have already invested heavily in the industry, and the government which protects their interests, must still defend it even in the face of mass opposition. The alternative is for these industries to write off their billion-dollar investments and face bankruptcy. The protection of profit levels motivates corner-cutting on safety precautions.

We can see the same forces at work in other "ecological" disasters in recent years. From the massive oil slicks released by wrecked tankers built on the cheap, via Niagara Falls, N.Y., where chemicals dumped at low cost into the Love Canal caused skin cancer among the local population, to the explosion at a Dioxin factory in Seveso, Italy that resulted in widespread destruction and genetic damage, the present social system of production endangers life itself. 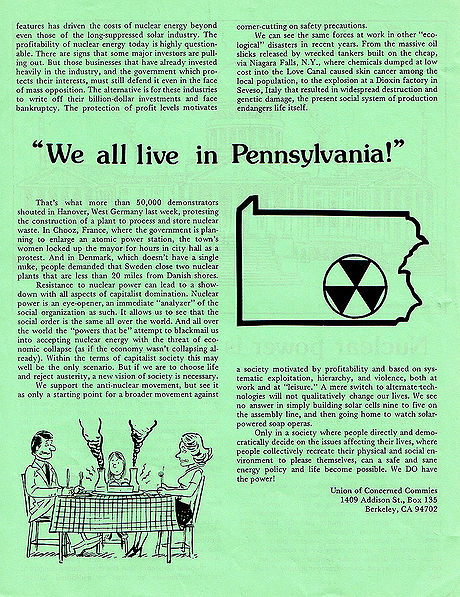 “We All Live in Pennsylvania!”

That's what more than 50,000 demonstrators shouted in Hanover, West Germany last week, protesting the construction of a plant to process and store nuclear waste. In Chooz, France, where the government is planning to enlarge an atomic power station, the town's women locked up the mayor for hours in city hall as a protest. And in Denmark, which doesn't have a single nuke, people demanded that Sweden close two nuclear plants that are less than 20 miles from Danish shores.

Resistance to nuclear power can lead to a showdown with all aspects of capitalist domination. Nuclear power is an eye-opener, an immediate "analyzer" of the social organization as such. It allows us to see that the social order is the same all over the world. And all over the world the "powers that be" attempt to blackmail us into accepting nuclear energy with the threat of economic collapse (as if the economy wasn't collapsing already). Within the terms of capitalist society this may well be the only scenario. But if we are to choose life and reject austerity, a new vision of society is necessary.

We support the anti-nuclear movement, but see it as only a starting point for a broader movement against a society motivated by profitability and based on systematic exploitation, hierarchy, and violence, both at work and at "leisure." A mere switch to alternate-technologies will not qualitatively change our lives. We see no answer in simply building solar cells nine to five on the assembly line, and then going home to watch solar-powered soap operas.

Only in a society where people directly and democratically decide on the issues affecting their lives, where people collectively recreate their physical and social environment to please themselves, can a safe and sane energy policy and life become possible. We DO have the power!

Return to the beginning of the Anti-Nukes Tour