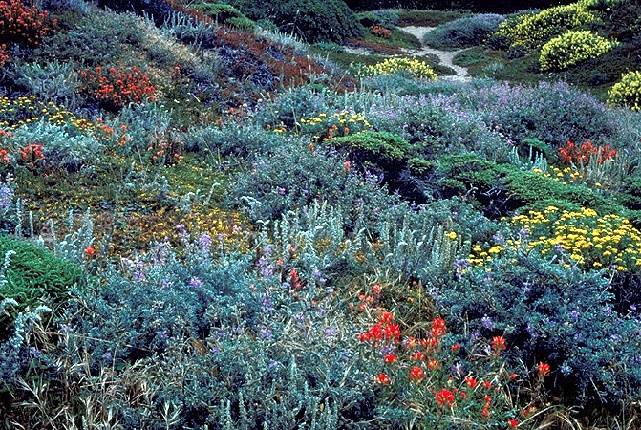 The city of San Francisco harbors a quite diverse and impressive local flora despite its dense population. Its remnant natural areas feature a surprising number of native plant species. At the Rare Plants Presidio, for example, approximately two-thirds of its indigenous flora--more than 260 native species--still remains, including 12 rare or endangered species. Though native plant communities are fragmented by buildings, roads, and tree plantations, they cover 145 acres of Presidio open space, more than 10% of its total area.

In 1934 John Thomas Howell published an account of a botanical ramble to Lone Mountain and the Presidio that illustrates both the continuity and change in native plant communities. Compare the excerpt of his account from 1934 (printed below) with the botanical reminiscences of Botanical Reminiscences, 1891 Hans Herman Behr of the 1850s and Wildflowers Alice Eastwood of the 1890s.

Two plants, long uncollected, led me afield last spring in the midst of the city. Can Amsinckia kelloggii [=A. spectabilis, coast fiddleneck] still be found on the slopes of Lone Mountain, and has Allocarya diffusa [=Plagiobothrys diffusus=P. reticulatus var. rossianorum, San Francisco popcornflower] been exterminated by the golf course in the Presidio--these were the particular questions to be answered. The quest led first to the mount which, until a few months ago, was a conical oasis of wild vegetation in a desert of streets and houses; but now on its truncated summit stands a school and its slopes have been so graded that scarcely aught remains of the native flora. It was with a doubt-filled mind that I trod the new-made ground and brushed past alien weeds crowding the freshly opened space with an alacrity which left the more tardy natives without a foothold. Passing on to a narrow border of the original undisturbed sand beside a fill of clay, a small colony of natives caught my eye. Here the sand phacelia [Phacelia distans], the trailing croton [Croton californicus], and the dune oenothera [Camissonia cheiranthifolia?] grew and, to my great delight, a few plants of Amsinckia kelloggii. To show that the plant still grew where over sixty years before it was first collected, specimens for the Herbarium of the California Academy of Sciences were prepared as a permanent record for reference. At no other place did I find the plant on the mount; and, as I left, I wondered if the next sweep of the grader would snuff out forever this plant in its classic home.

Heartened by my find, I started for the Presidio, cutting down across the cemetery which flanks the mountain on the west. Here was change too: yawning holes of exhumed graves betokened the encroachment of the living on the city of the dead. Once in the Presidio I sought those slopes above the Marine Hospital and Mountain Lake where, it appears, Green, and no one else, collected his Allocarya in 1886 and again in 1887. Again success was mine for I found this most local species growing with Microseris bigelovii on a restricted clay flat near the summit of the ridge between the Marine Hospital and Fort Winfield Scott. A collection made, I took my way homeward down sandy slopes where low masses of Chorizanthe cuspidata [San Francisco spine flower] and Cryptantha leiocarpa were beginning to bloom and where plants of the autumn-blooming Lessingia germanorum [San Francisco lessingia] were becoming evident in opens between prostrate mats of the true Baccharis pilularis [coyote bush] and bushes of Ericameria ericoides [mock heather]. It had been a day well filled.

The desire to have again in the Herbarium of the California Academy of Sciences specimens of Cirsium amplifolium [=C. andrewsii, Franciscan thistle] took me last July to Lake Merced where the plant had been collected by Miss Eastwood before the fire of 1906 and again by Suksdorf in 1913. A diligent search along the eastern shores of the lake disclosed no extraordinary thistle, only the widespread C. edule [=C. brevistylum, Indian thistle] and C. occidentale [cobweb thistle] on open sandy slopes. For the time I had given up and had started home when I lost my trail on the floor of the narrow swale east of the southern arm of the lake and became entangled in the dense growth of willows, Californian Sweet Gale, and rank herbs. In this annoying predicament while bending every effort to force my way into the open, the desired plant was found, a single robust specimen well covered with heads of light rosy-purple flowers.