Difference between revisions of "Marshall Square" 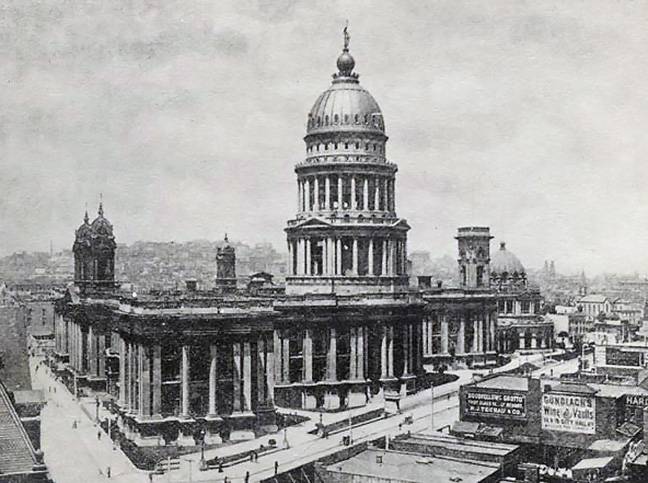 City Hall, circa 1900. As photographed from the rooftop of the bygone Mechanic’s Pavilion at Hayes and Larkin, the old City Hall is bounded in front by the diagonal slash of City Hall Avenue extending rightward to Leavenworth and McAllister from Larkin Street on the left.

Marshall Square was a plaza that connected Market Street with City Hall Avenue,* a parallel frontage road for the old City Hall. When the old City Hall was destroyed by the 1906 earthquake and fire, the design for a new Civic Center demanded the reshaping of grid lines. City Hall Avenue was completely obliterated and Marshall Square became part of the Hyde Street extension to Market. Opened in 1926, the office building and theater at the corner of Hyde and Market is the namesake of Marshall Square, though anymore it is known only by the name of its theater, the Orpheum. 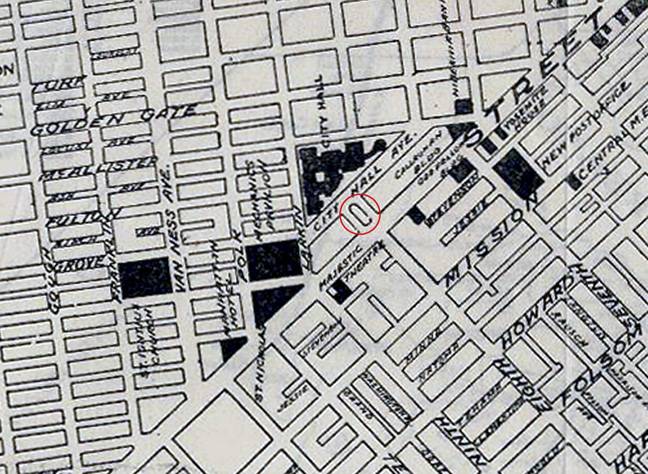 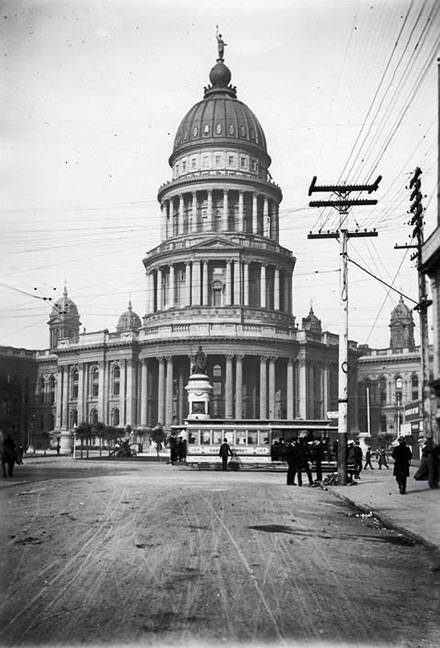 City Hall, circa 1890s. Shot from Eighth Street just below Market, this view looks straight across the Pioneer Monument in the middle of Marshall Square to the old City Hall. Crowning its Baroque dome is the Goddess of Progress, an iron statue with a corona of electric light bulbs.

Designed piecemeal by seven different architects; shoddily constructed with compromised materials over a period of twenty-seven years at a cost of six million dollars; the old City Hall was a disgraceful mess, the malodorous* embodiment of municipal graft. Nine years after its completion, it was all but destroyed by the 1906 earthquake and fire.

*The stench of raw sewage frequently permeated the superstructure’s poorly ventilated chambers and corridors, a consequence of faulty plumbing. 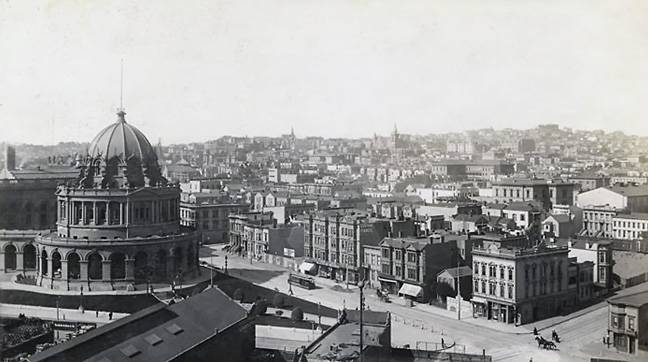 City Hall Avenue, 1899. Looking northwest from atop the Odd Fellows Building at Seventh and Market, we see the east end of City Hall Avenue intersecting with McAllister and Leavenworth Streets, opposite the Hall of Records on the left. 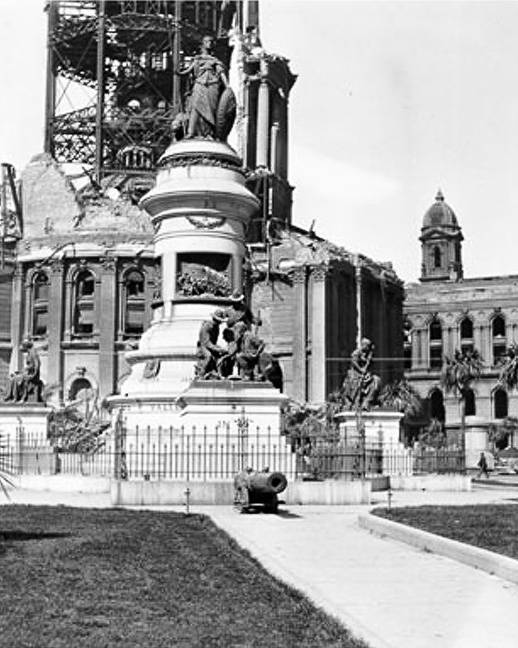 Pioneer Monument, Marshall Square, 1906. A view looking north across City Hall Avenue, with the ruins of the old City Hall in the background.

Built in 1894 with money bequeathed by real estate magnate James Lick, sculptor Frank Happersberger’s Pioneer Monument mythologizes the story of San Francisco’s supposed “manifest destiny.” As told by the empire builders themselves,* it is an unabashedly romanticized story of empire building that depicts Native Americans as a docile and subservient people conquered by the Argonauts, nom de guerre of pioneering gold miners. Contrary to both reality and Lick’s final wishes, the monument also places Mining ahead of Agriculture in order of importance, if not sustainability. Taken from the Great Seal of California, the figure that crowns the monument is Minerva, Roman goddess of wisdom and sponsor of arts, trade and technology. As a goddess born fully-grown, she symbolizes California’s direct attainment of statehood without first becoming a U.S. territory.

*Lick was a founder of the ultra-exclusive Society of California Pioneers. 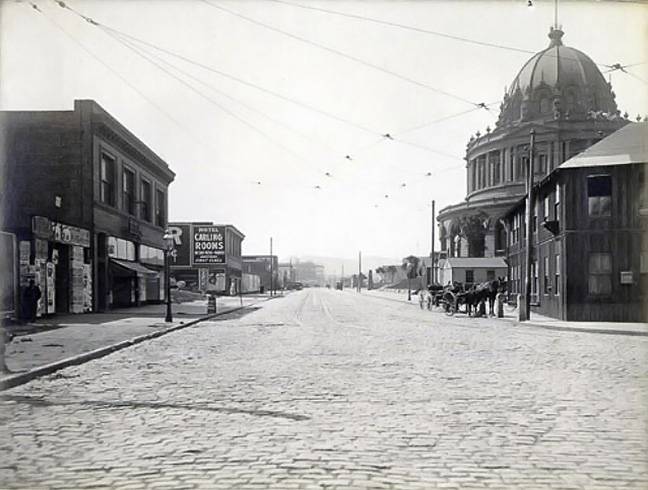 City Hall Avenue, 1910. Looking southwest from Leavenworth Street, all that remains of the old City Hall is the domed Hall of Records. It was razed in October 1916 by the Dolan Wrecking Company. 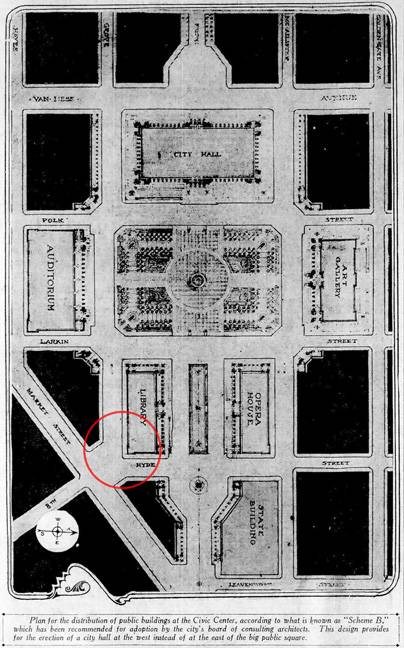 Illustration, San Francisco Call, 29 May 1912. “Scheme B” plan for the Civic Center. Chaired by John Galen Howard, the consulting architects included Frederick H. Meyer, and John Reid, Jr. Note the extension of Hyde Street, where the site of Marshall Square has been circled in red. Also of interest are the proposed sites for a library, art gallery, opera house and state building.

As things turned out, City Hall and the Civic Auditorium were the only Civic Center structures completed by 1915, just in time for the opening of the Panama Pacific International Exposition. The Civic Auditorium was in fact specifically designed for the PPIE and is one of the few exposition buildings still remaining. It was renamed the Bill Graham Civic Auditorium in 1992, in memory of the City’s renowned concert promoter. The beaux-arts Main Public Library was built in 1917 on the site proposed for the opera house. Following extensive remodeling under the direction of Italian architect Gae Aulenti, the building became home to the Asian Art Museum in 2003. The new Main Library, erected 1993-95 and opened in 1996, was built on the site originally proposed for a library. 1922 saw the opening of the California State Building at 350 McAllister, proposed site of the art gallery. Today, the beaux-arts granite structure is home to the Supreme Court of California. Opened in 1932, both the beaux-arts War Memorial Opera House and its twin sister, the War Memorial Veteran’s Building (home to the San Francisco Museum of Modern Art until 1994), were constructed on Van Ness Avenue, opposite City Hall. The site proposed for a state building, now part of the United Nations Plaza, is where the beaux-arts Federal Office Building was constructed between 1934 and 1936.

As composed of these seven beaux-arts buildings, the San Francisco Civic Center is widely considered as one of the most successful manifestations of the City Beautiful Movement. Listed in the National Register of Historic Places in October 1978, it was designated a National Historic Landmark in 1987. 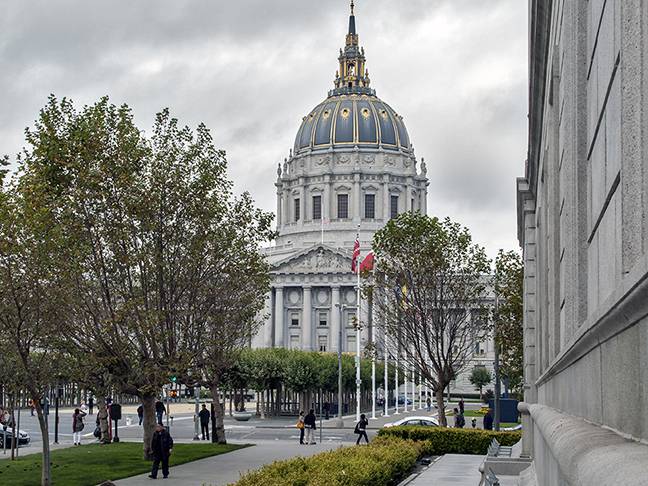 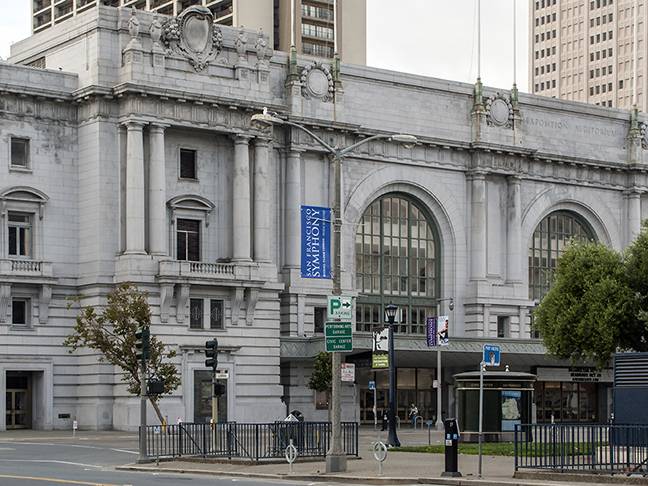 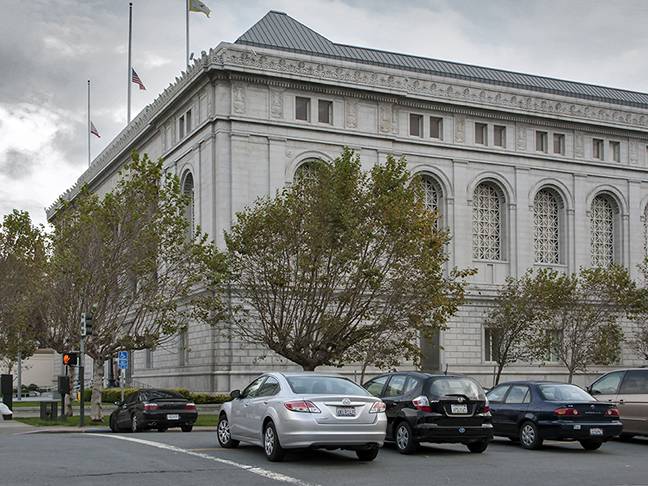 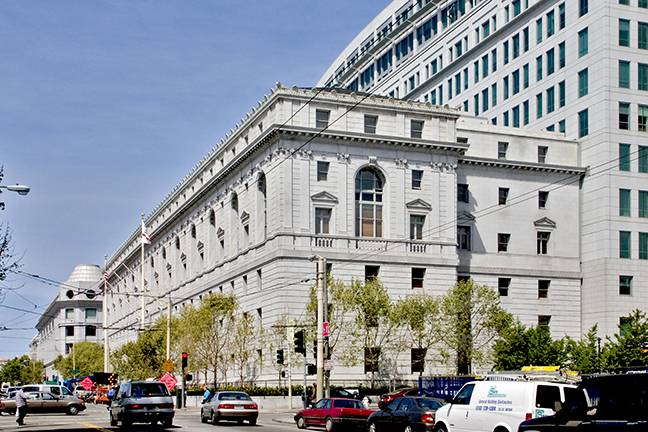 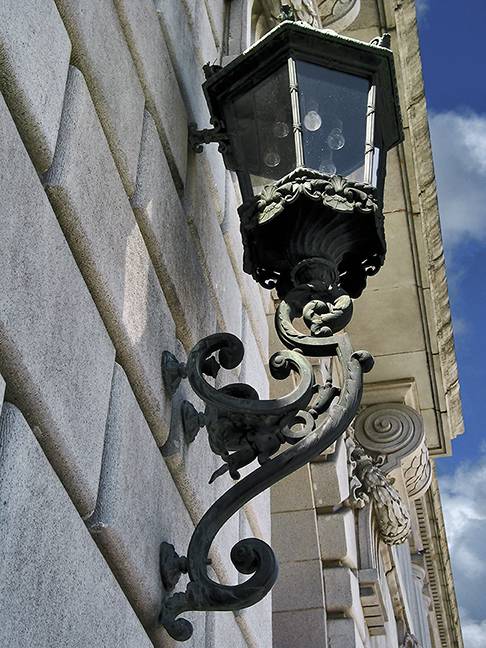 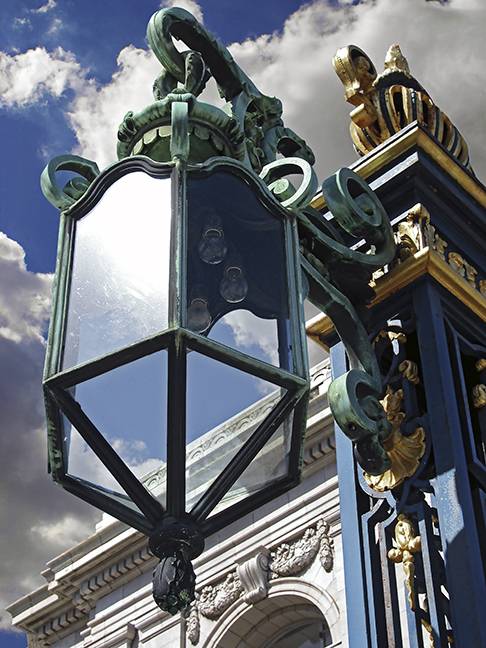 A gated pedestrian walkway — in truth, a tiny park — separates the Opera House and the Veterans Building (partly visible in the background of this photo). 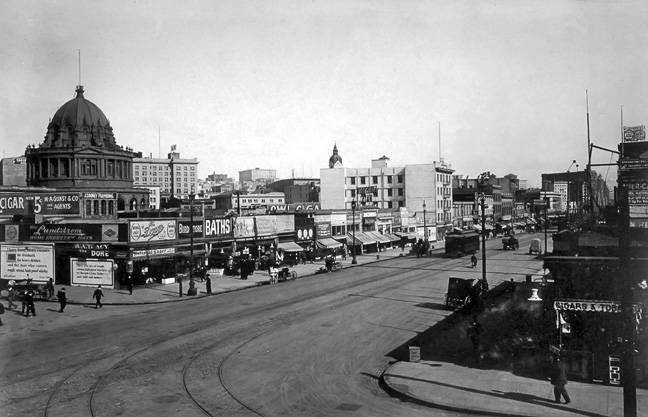 Market and Eighth, 1912. The view is to the northeast along Market Street as photographed from the southwest corner of Eighth Street, opposite Marshall Square. On the left is the old Hall of Records on City Hall Avenue. 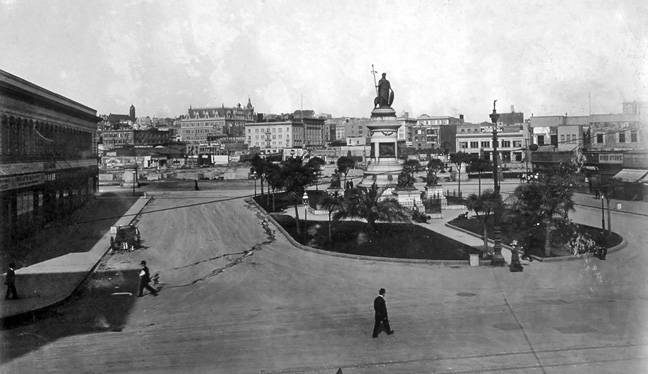 Marshall Square, 1914. When this photograph was taken, Marshall Square and City Hall Avenue were little more than artifacts of former times. The old City Hall had been demolished and construction of the new City Hall and Civic Auditorium was nearing completion. Together with its associated infrastructure and architecture, City Hall Avenue was anomalous to the evolving urban fabric. Soon, every trace of it would be expunged. Marshall Square as a plaza would also disappear, though its eastern pavement would endure as part of the Hyde Street extension. The Pioneer Monument remained in place until 1993, when it was moved to the orphaned block of Fulton Street between Hyde and Larkin, to make way for the new Main Library. 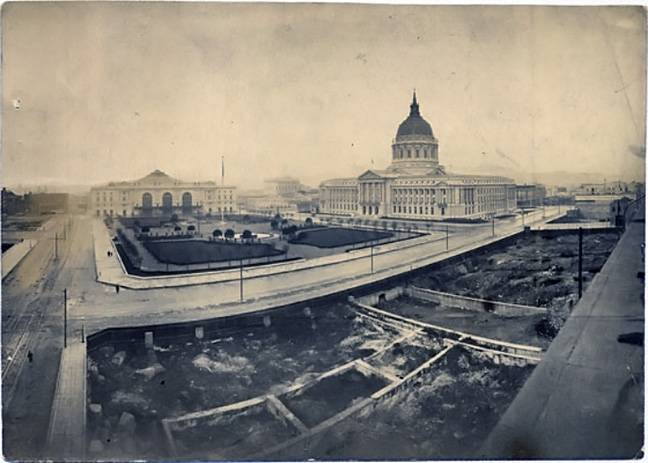 New City Hall, circa 1915. Looking south from Larkin and McAllister, the new Civic Auditorium is in the background to the left. The block-long excavation in the foreground marks the site of the California State Building, completed in 1922. 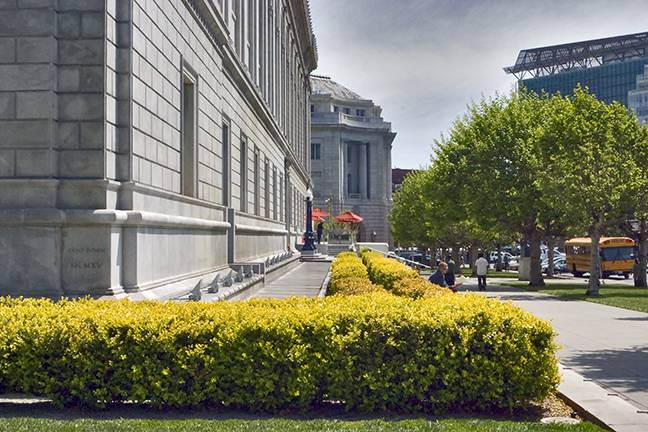 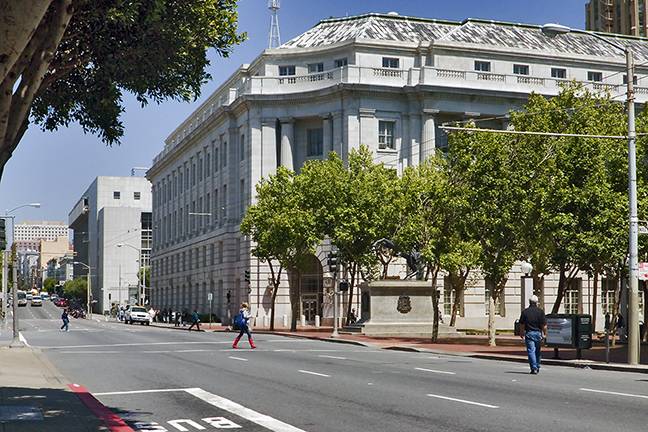 Now occupied by the General Services Administration, the old Federal Office Building was constructed near the site of the former Hall of Records. In 1975, the building became an integral part of the newly-constructed UN Plaza, a 2.6 acre pedestrian mall designed by Lawrence Halprin to commemorate the 1945 signing of the United Nations Charter at the War Memorial Opera House. The plaza was rededicated by visiting members of the UN General Assembly in 1995. Following much-needed renovations, it was again rededicated during World Environment Day in 2005. The new Federal Office Building is on Mission, across Seventh Street from the Ninth Circuit Appellate Court. 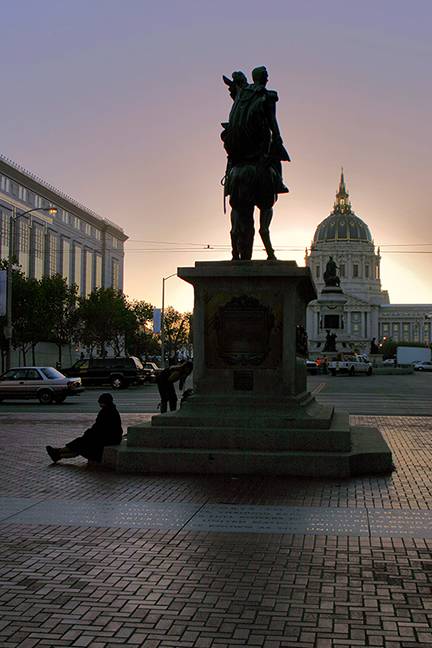 At the west entrance to the United Nations Plaza, aligned with the Pioneer Monument and City Hall, stands a monument to Simon Bolivar, the founder of Bolivia and liberator of Columbia, Ecuador, Panama, Peru and Venezuela. Dedicated on 06 December 1984 by Dr. Jaimie Lusinchi, President of Venezuela, the monument is a copy of Adamo Tadolina’s original nineteenth-century sculpture that stands in the Plaza del la Constitucion in Lima, Peru. On the left of this photo is the new Main Library. 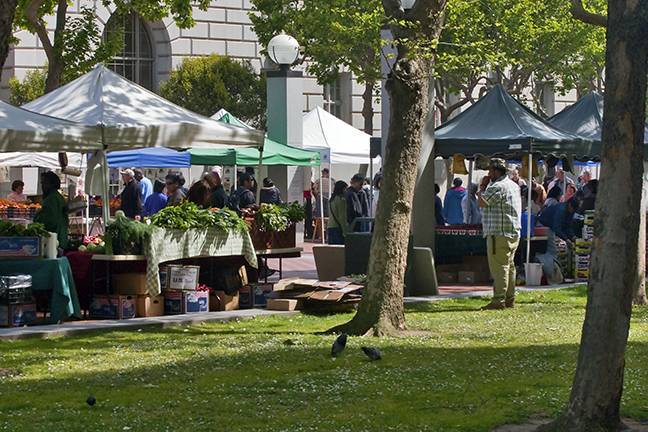 One of the nicest things to flourish in the central city in more recent years is a farmers market, which takes over the United Nations Plaza every Wednesday, Friday and Sunday. 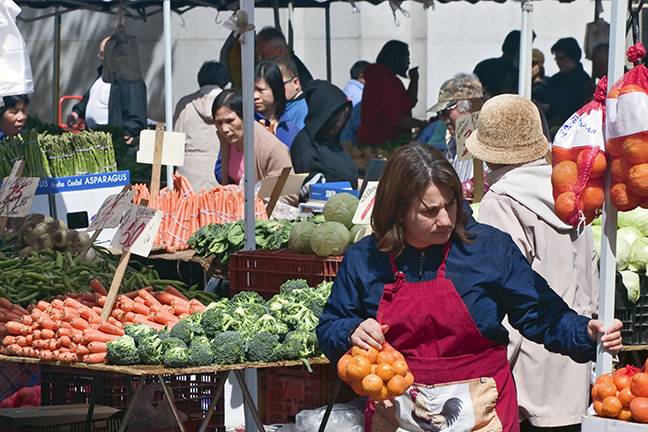 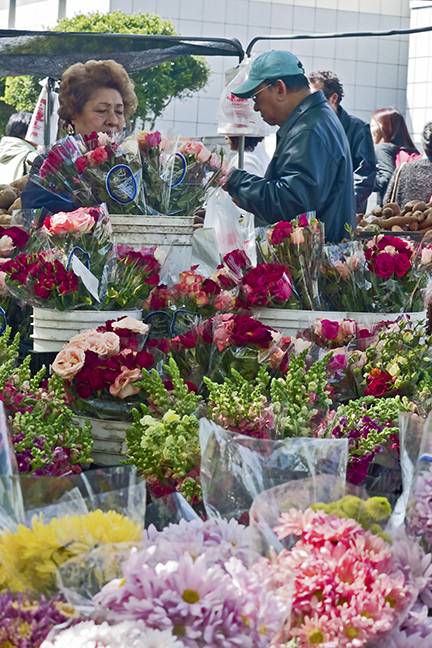 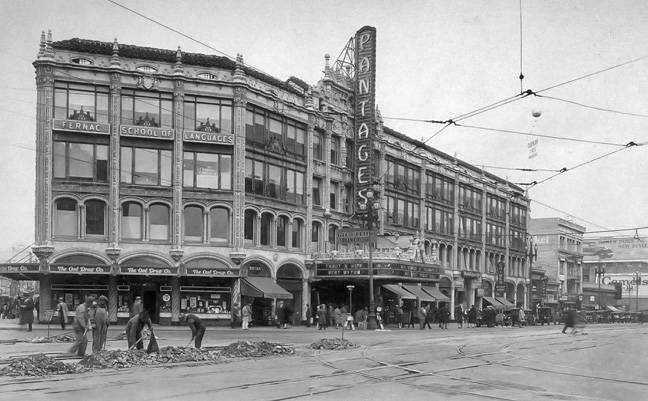 Marshall Square Building, 1926. Until the early 1990s, the Marshall Square Building’s storefront arcades were occupied by a pharmacy on the corner and various small businesses that added much to the character and color of Market Street. One business I particularly remember bore the name of its proprietor, “Mister San Francisco,” a dapper fellow with an extraordinarily long, waxed, and elaborately curled Snidely Whiplash mustache, who conducted off-the-beaten-path tours of the local night life. 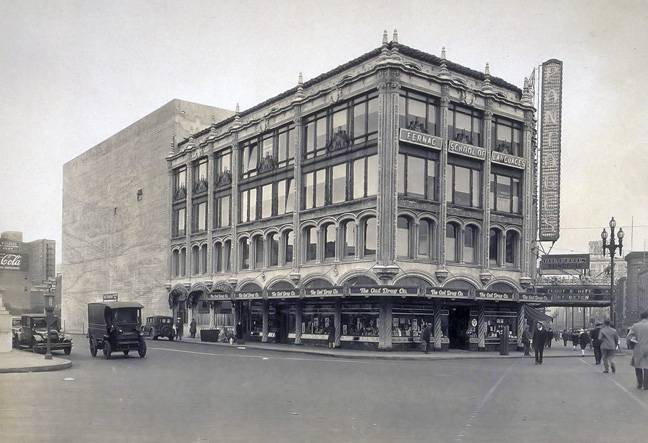 Marshall Square Building, 1928. Revealed in this view is a corner of the Pioneer Monument at the foot of the Hyde Street extension on the left.

After the Marshall Square Building was purchased by its current owners, tenants were forced to leave, some sooner than others. Last to go was the corner pharmacy. While the theater thrived, the Marshall Square Building itself was neglected; characterized by darkened storefronts, empty save for odd bits of debris left behind by departed businesses. By the time the Pioneer Monument was moved to Fulton Street, every storefront was vacant and soon would be sealed and stuccoed-over. Where once were variety and commerce, there now are anonymous windows and blank wall, prosaic and drear. Marshall Square has already faded from civic memory, and with antecedents thoroughly obscured, its namesake is only known as the Orpheum Theater. 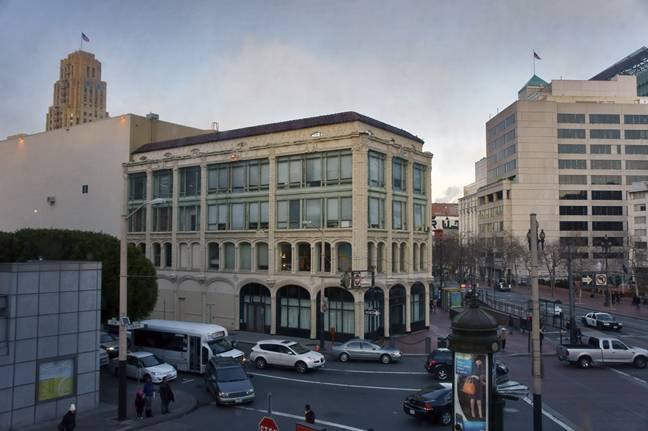 Bottom left in this photo is a corner of the new Main Library. 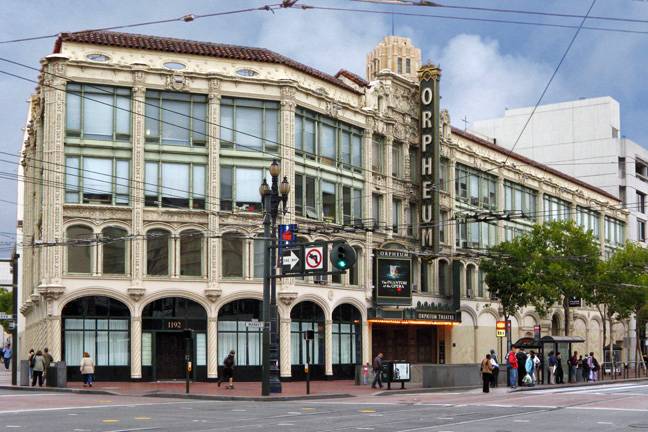 Christened the Pantages when it opened in 1926, the theater was designed as a vaudeville house to replace the original Pantages Theater at 939 Market Street. A few years later, it was sold to RKO and soon thereafter reopened as the Orpheum, a first-run movie house. From the premiere of This Is Cinerama! on Christmas Day 1953 until the final showing of Ice Station Zebra early in 1970, the Orpheum was San Francisco’s foremost Cinerama cinema. The theater was closed for a short time and then reopened in 1977 as a venue for live theater, but the conversion was unsuccessful and the theater was closed once again. It was purchased in 1981 by the Shorenstein Hays Nederlander Organization and since then has been a successful showcase for traveling Broadway shows. 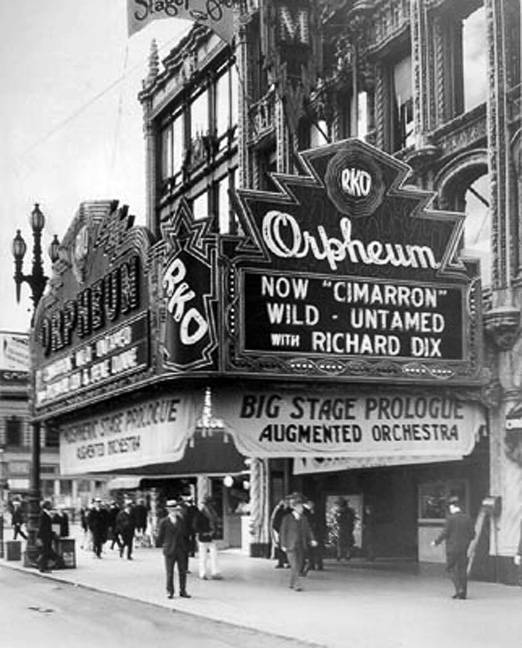 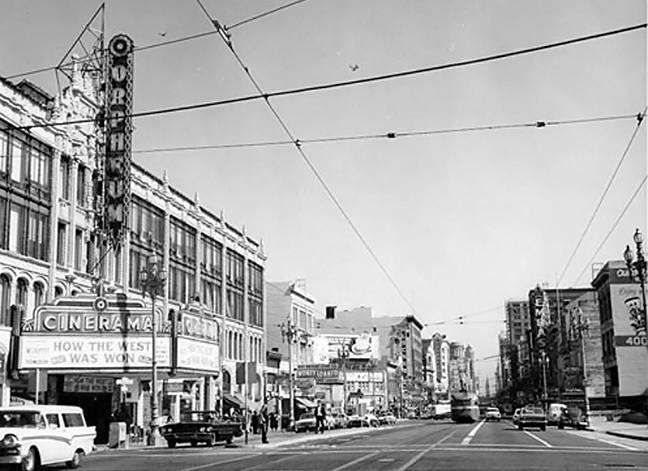