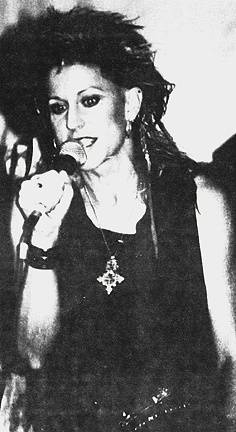 ... Amongst us were poets, writers, activists, musicians, artists, film-makers, actors, dancers, and inspired workers in every niche of life, people who wanted to make flowers bloom that weren't invented yet. Every idea was pregnant with possibility. If anyone suggested "let's have a Moroccan cafe night with films, live music and mint tea," the attitude was "let's move on it . . . now!" We rarely showed video then -- it was films all the way! If someone asked for help getting a film projector or to make posters, the answer was "Meet me at the door at seven, we'll move it in and start postering or whatever it takes." The point was to make it happen. Everyone from scientists to bondage organizations had a place and a night to express their party line and three bands to serenade the faithful.

We decided to give a printed voice to our ideas and dreams. We asked big questions: what is needed in the world, in our lives, in the Mission? Where can an individual contribution fit in? How does a group not get too "correct" in their politics and yet provide a forum for the expression of the diversity in the community? After much discussion and some agreement on core issues, a magazine was born in crude potent form. People wrote under pen names that would often change, although Reptile Brain continues to this day.

We ended up being somewhat leftist without really trying. We had started calling ourselves Komotion even before the move to 16th Street. "How long does it take Komotion people to screw in a lightbulb? asked Vince Shelley, now in Alaska. "They can never get it in, they're screwing to the left." Our politics were predictable at times, but part of any good experiment requires risk taking. Controls are applied according to learned necessity, not according to a cookbook. We learned the hard way sometimes. We booked way off the wall people. They wouldn't show up. Or they did and had expectations beyond our reality . . . ("Where's the coke, man, and my deli tray and my guest list is 50 people.") Komotion is like a dog- who runs after a moving tire and grabs it. GRRRRR! BANGABANGA-BANGABANGA! (He won't let go!)

We invited more people to exhibit their art; people with incredible work, gay people, pagan people, corn-puter people, Northwest people. Weird bands, making-it-big bands, young poets, lost creatures new in town, dancers with no companies, film-makers with whole movies unseen, artists in no gallery. Theater made an appearance where there were no curtains.

I have a photograph of the Flamenco dancer Ernesto at Komotion. The whole look and feel is right out of a cave in Granada in Spain where flamencos used to perform. Komotion is where the flamencos can stretch out, where voices of tribes can sing out against their oppressors. Here is where a poet can feel the receptivity to read new work. Here is where you hear a band called "Los Madres del Che" or "Cantoamerica?".

John Trudell arrives two days after the tragic death of his partner, Jesse Ed Davis. Leaning against the gas pipe leading to the busted cappuccino machine, he turns on the gas lever, accidentally. Gas fills the room, smelling dangerous. He is tired, doesn't notice, pulls out a smoke, a book of matches. Nobody knows where the gas is coming from...

"Thanks for stopping me from blowing us all up!" he says later over tostadas at La Rondalla. So reads a poem about staying out of space, where The Challenger blew up a while back ...

A member of Crash Worship crawls out the front door into the street after their hour-long set. She's gasping for air, naked except for one torn sock, soaking wet with beer and perspiration. Half of her dreadlocks are burned off.

"What's burning in there, the rug?"

"I dunno, everyone in front of the stage was like on fire when I jumped on 'em .... got a cigarette?"

"That was the greatest dancing I ever did," says one. "I think they lit everything on fire .. . as a symbolic statement of equality!"

Komotion has NO SMOKING signs now and the universe is healthier.

Painted blue, wearing a blue jockstrap, playing bass with HET (Nyet). Channeling Nijinsky, "I lose the beat completely when my "A" string breaks. I can't find the beat; it's turned around in my brain, so I play backwards across the beat 'til the end of the song." A year later the Russian band ZVUKI MU is playing and singing "there is no sugar there is no money" (rough translation) So their bass player does the same thing. He's in America for the first time, drinking watery beer, so exhausted and ... the beat turns around...

There was an invisible thread that connected the people and events. An ever widening pool of "family" worked together, rotated responsibility, discussed issues, philosophized, and went on into the world I inspired to create. When I came back to Komotion after an extended trip, I wanted to see all those faces that were part of the tapestry we wove. I would call in the middle of the night saying "I finally understand that poem you did about mescal" "What are you doing in Trinidad?" "Where's the tape of Mondo Jim talking to aliens?" "Did you finish that film?"

As times change, Komotion continues to experiment and evolve. The spirit of idealism that came out of the first groups to meet and grapple with the potential of a basic vision has matured with time and experience, becoming clearer and more responsive. No less than a concerted revolution is required to transform individuals and a society. Komotion provides the support to test one's ideas and dreams. In so doing, it provides a fertile ground for the emergence of unexpected results. It is a living entity, and I'll drink to that!