KENNETH PATCHEN and his Picture-Poems 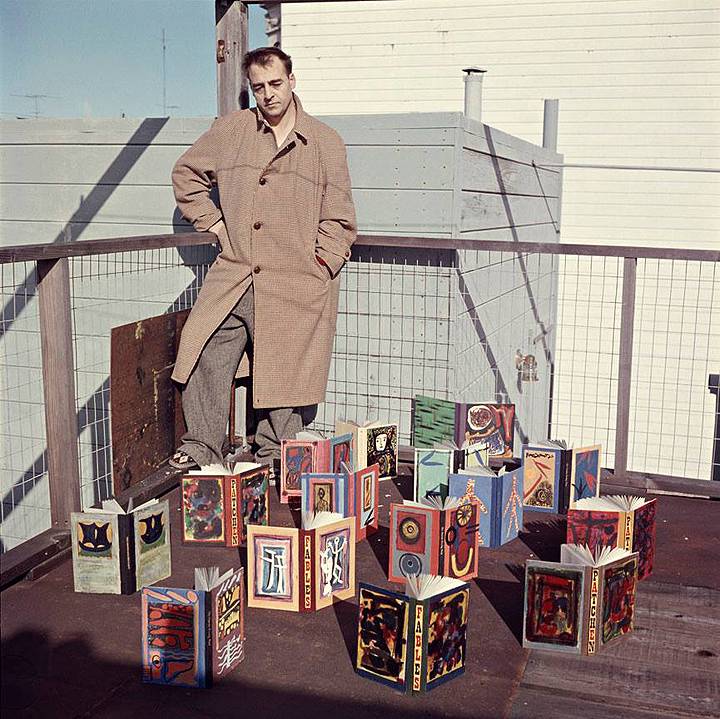 Kenneth Patchen in 1957 with a collection of his painted books, taken on the rooftop of photographer Harry Redl's apartment house in San Francisco. 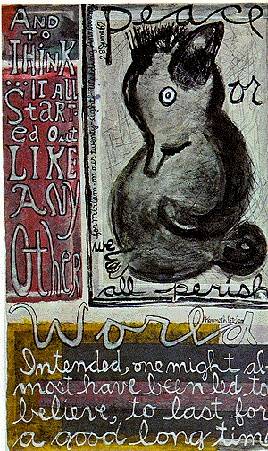 And to think ... It all started out like any other world. Intended, one might almost have been led to believe, to last for a good long time ... Peace or we all perish.

The poet Kenneth Patchen, who moved to San Francisco in 1950, believed the true subversive act of the individual is the creative act. This is expressed in his early poem, "Joe Hill Listens to the Praying". Set in a prison yard where the Wobbly songwriter Joe Hill stands before a line of rifles, the poem celebrates both Hill's life and the Wobbly movement as a creative reality:

Let them burne us, shoot us,

For at the last we had what it takes

to make songs with

By the time Patchen and his wife Miriam Oikemus, a Finnish pacifist, reached San Francisco, Kenneth was experiencing severe back problems, the result of his trying to separate the locked bumpers of two cars back in 1937. In 1955 Patchen underwent a successful spinal fusion operation and experienced good health for the first time since his accident.

In the fall of 1957, after regaining his health, Patchen frequented the clubs of San Francisco and Los Angeles, reciting poetry to the riffs of jazz musicians. This collaboration of musicians and poets set the stage for writers in the later part of the decade, a generation known as the San Francisco Renaissance. This later poetry evolved from the more text-oriented poetry of academia into the bard-like traditions of the performative and political poets who use colloquial language and theatrical recitals to politicize the lyric.

Kenneth continued his "poetry-jazz" until 1959, when he spent two weeks in New York with Charlie Mingus. Upon his return to San Francisco, he underwent exploratory lung surgery at the insistence of his doctor, which destroyed the successful results of his earlier spinal infusion. He never fully recovered. For the rest of his life, Patchen was bedridden in Palo Alto.

It was at this time that Patchen began to create his picture-poems, a unique genre of poetry which integrated his ideas of human nature, social protest, and creativity. Patchen couldn't continue to use the physical performance of his poetry to reach an attending audience. The words became drawings, the improvisation of the jazz music became his spontaneous placements of the words on the page, complemented by the spatial arrangement of the drawings. The picture-poems are jazz-like in that they keep rhythm through the words and move through the seemingly child-like nature of the anti-linear creatures and figments of Patchen's imagination. They are celebrations of everyday playfulness as well as realizations of the sadnesses, humor and limitations of the body and mind. Also they are personal protests, insights into the institutionalized notions, both spiritual and political, that corrupt community and creativity.