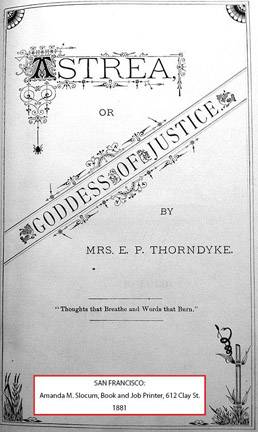 This Spiritualist book of poetry was printed by a woman printer, Amanda M. Slocum at 612 Clay Street in San Francisco in 1881.

Location of women printers based in San Francisco from 1854-1893

Montgomery Street, between Sutter and Post
(An 1860 California census lists printing operations here as being at 6 Montgomery Street)
1858: Location for printing operations for the women’s journal the Hesperian. Hermoine (Ball) Day is the editor from 1858-1862. Day works in cramped quarters until she can move printing operations in 1859 to Montgomery Street, between Sutter and Post Streets. Day is also a business woman in the sense that she opens her own branch for the then popular Madame Demorest’s Emporium of Fashion at 111 Montgomery Street. Day successfully runs a monthly magazine, keeps a shop, write articles, and keeps a household—an astonishing feat for career women even by today’s standards. In 1863, the name of the Hesperian is changed to the Pacific Monthly and is run by the fiery Lisle Lester. It also ceases to be a women’s journal.
2011 (site for printing operations for the Hesperian): Location for Fidelity Investments
2011 (site for Madam Demorest’s Emporium of Fashion): Vacant/for lease building which is located next to the historic California Pacific Building


417 Clay Street
1863: Location for printing operations for the newspaper, the Pacific Monthly. The newspaper is taken over and run by Lisle Lester until November 1864. Its first issue is published in 1863. The paper is formerly known as the Hesperian.
2011: Location for the hotel Le Meriden


537 Clay Street
1868: Location of the original site for the Women’s Co-Operative Printing Union (WCPU), 3rd floor. Agnes Peterson launches the union in 1868. The union is taken over and run by Lizzie G. Richmond, who, with her husband, relocates printing operations for the union to Montgomery Street. The newspaper, the Sunday Evening Mercury, is printed at this location until November 1869.
2011: Location for a City Park parking structure.


Odd fact about this location: On the corner of Clay Street and Leidesdorff Street, on one wall of the aforementioned parking structure, there is a historic San Francisco marker which notes how a specific event during 1868 leads to the creation of the first Society for the Prevention of Cruelty to Animals. There are no other markers in the surrounding vicinity which note that the WCPU initially began its printing operations in 1868 at 537 Clay Street, and this particular marker for the SPCA itself is essentially unnoticeable, given its odd placement.


The marker states the following:
“NEAR THIS SITE OCCURRED THE INCIDENT WHICH LED TO FORMATION OF THE SAN FRANCISCO SOCIETY FOR THE PREVENTION OF CRUELTY TO ANIMALS ON APRIL 8TH, 1868.
James Sloan Hutchinson, a pioneer banker, witnessing nearby an act of cruelty to animals, a condition all too common at that time, was aroused to put a stop to the offense. This led him to gather a number of leading citizens to form the first SPCA in the West and the fourth one in the United States.
PRESENTED BY THE AMERICAN HUMANE ASSOCIATION IN COOPERATION WITH THE CALIFORNIA HISTORICAL SOCIETY AND THE WELLS FARGO BANK IN RECOGNITION OF 100 YEARS OF SERVICE ON BEHALF OF ANIMALS.”
It is interesting to consider how Peterson and other women on staff at the newly-formed WCPU might have actually been witnesses to the Hutchinson event (in which Hutchinson witnessed a hog being cruelly drug through across a rough cobblestone street). Furthermore, it would be fascinating to learn more about the WCPU’s opinion of, and any potential involvement in the formation of the SPCA in 1868 with regard to the two organizations’ shared, foundational interest of extending and protecting equal rights.


511 Sacramento Street
1869: Location of the 2nd site for printing operations for the newspaper, The Pioneer. In January 1869, Emily Pitts Stevens takes over and transforms the image of the newspaper, the Sunday Evening Mercury, changing it from a “journal of romance and literature into the premier voice for woman's suffrage in the West.” By November 1869, Stevens renames the paper to The Pioneer and moves printing operations from the WCPU to the paper’s more permanent location on Sacramento Street. Stevens also leaves the WCPU in order to edit The Pioneer from a location that enables her to hire women as compositors. She becomes a major force in helping to found the California Woman Suffrage Association on January 28, 1870. The Pioneer runs until 1873.
2011: Location for a branch of the Mechanics Bank


1117 Pine Street
1871: Location of the site for the wood engraving business between two sisters, Leila and Mary Curtis. The business initially begins as an engraving shop in the carriage house that belongs to two sisters named Leila and Mary Curtis. By 1871, Mary becomes the draughtsman, and Leila, the block-cutter for their business.
2011: Location for Somerset Apartments


405 Sansome Street 1872: Location of the 2nd site for the Curtis sisters’ wood engraving business. After Mary Curtis marries, she slowly withdraws from the business and finally leaves it in 1875.
2011: Location for Morning Brew Coffee and Tea café


420-424 Montgomery Street
1873: Location of the second site for the WCPU, 2nd floor. In 1873, Lizzie G. Richmond takes over the union and relocates it to its more permanent location on Montgomery Street. The WCPU is an extremely important marker in the history of women printers as it is operated by women and staffed primarily with women.
2011: Location for a historic branch of Wells Fargo and Co.


236 Montgomery Street
1874: Location of the site for printing operations for the newspaper, Common Sense. Edited and run by Amanda M. Slocum and her husband, William N. Slocum until 1875 (however, William is listed as the “editor” while Amanda is listed as the “assistant” of the paper).
2011: Location for the historic Mills Building


219 Bush Street
1884: Location of the site for the wood engraving business Eleanor P. Gibbons and Co. At some point, Eleanor Peters Gibbons joins Crane and Curtis in order to train as a wood engraver. She leaves Crane and Curtis for some time and then returns in 1880, taking over in 1884 and renaming the business as Eleanor P. Gibbons and Co. with Leila remaining on staff. Gibbons relocates the company to Bush Street where the women all work as engravers and designers in wood. By 1888, the company becomes an antique interior decorating company and resigns from all earlier connections with printing.
2011: Location for a branch of Wells Fargo and Co. which is part of the historic Standard Oil Building


23 First Street
1887: Location of the third site for the WCPU. The union makes this move in order to merge with Hicks-Judd Printing Co. Printing operations continue here until Nelson Judd sells the business in 1920 to the Sunset Publishing Corporation. The union itself persists until 1901 when it meets its demise due to both a natural disaster from a fire and several poor mergers which lead to damaging business dealings.
2011: Location for Focaccia Market and Bakery at 455 Market

Sarah Moore Clarke: In September 1854, Clarke starts The Contra Costa as a four-page weekly in Oakland. She has the actual issues for the paper printed on site at the location for the daily San Francisco Evening Journal in San Francisco due to the lack of access to a printing press in Oakland. The one surviving copy dates from November 10th, 1854. She intends for the paper to be a woman’s paper. Eventually, Clarke’s husband buys the Evening Journal (perhaps in response to Clarke’s dissatisfaction about having to print on the opposite side of the bay), and he helps her keep the paper going until March 1856.


Cora Anna Weekes: Editor/publisher of a weekly newspaper called The Athenaeum. Unfortunately, the paper only lasts a month and stops running on March 20th, 1858.


Virginia F. Russell: Editor/publisher of the newspaper El Dorado. The paper runs for a short time in 1869.


Julia Schlesinger: Editor/publisher of The Carrier Dove. The paper runs from 1883-1893.


Helen Hyde: A lithographer, wood engraver, and etcher. She etches many Chinatown prints between the years of 1894-1899.


J.W. Likins: Book agent/canvasser. Likins sells engravings and book subscription in person to the public primarily on the streets of California, Montgomery, Front, and Davis from 1868 to the early 1870s. Her dedication as a book agent both contributes greatly to at-home literacy and makes dramatic book sales, promoting the work of authors of the time such as Samuel L. Clemens (Mark Twain).