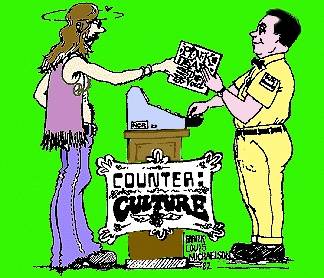 "The basic problem of hippie culture was that it had no economic base. It was based upon selling dope to one another, ripping one another off, and cashing checks from back home."

Hip capitalism fails to overcome hippie culture's lack of an economic base.

- Calvin Welch, from a lecture at New College in Fall 1994. -Adam Cornford, Artist