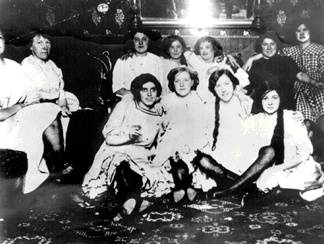 Gold rush San Francisco had its own version of this mythology: that of the bawdy pioneer prostitute. The suggestion conjures images of lavishly dressed women draping the arms of tough looking gamblers drinking whiskey and throwing bags of gold dust on the card table. Indeed, some of this mythology rings true. Prostitutes occupied a privileged place in gold-rush society, with economic opportunity beyond that of any other working American females. And they certainly belonged to the pioneer, gold-miner elite, involved in legendary bar-fights and shoot-outs in the honor of their slighted lover. One San Francisco madam, Belle Cora, was hung for these crimes.