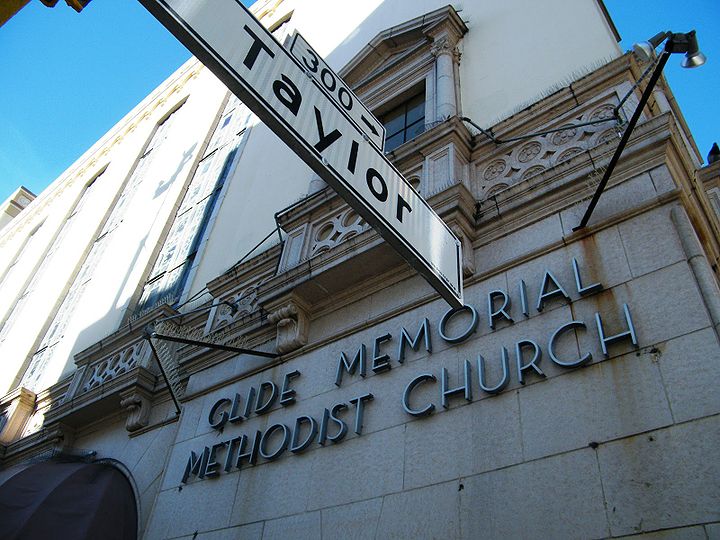 In 1929, Methodist philanthropist Lizzie Glide founded the Glide Foundation as a memorial to her millionaire cattleman husband, H.L. Glide of Sacramento, and built the Glide Memorial United Methodist Church at the corner of Ellis and Taylor Streets. Although conservative until the 1960s, since then Glide has served as a counter-culture rallying point and has been one of the most prominently liberal churches in the United States. 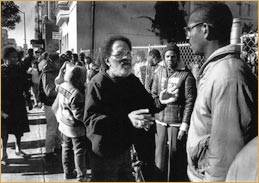 Cecil Williams organizing in the Tenderloin, 1967; courtesy Glide Memorial Church
This downtown Methodist church with a small congregation was transformed in 1962 when the board of its endowment fund hired the Rev. Lewis Durham. Durham hired three other young clergymen, Ted McIlvenna, Cecil Williams and Don Kuhn, to develop and staff programs for the Glide Urban Center. At the time, Glide had lots of money from its endowment, but no programs. This made Glide an ideal location for new programs. 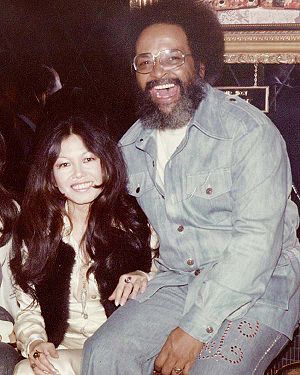 Cecil Williams and his wife Janice Mirikitani in early 1970s; courtesy Glide Memorial Church
The fabric of U.S. life was unraveling in the early 1960s, the accepted norms under severe stress from new behaviors and expectations. Progressive clergymen took to the streets to connect their ministries with marginalized persons. The Glide Urban Center in San Francisco exemplified this new urban ministry. The pastors at Glide Foundation and the church saw themselves as missionaries, who did the work important to those in the neighborhood. This included working with gays, sex workers, “young chickens,” youth, hippies, gangs, drug addicts and others. Because the pastors saw themselves as missionaries or “enablers,” as Lewis Durham called it, they listened to people to determine what the church needed to address. The unexpected focus on sex and sexual identity emerged from these consultations as the Glide missionaries realized nobody was dealing with it.