Gay Latino Alliance: Latinidad and Homosexuality in the Mission District 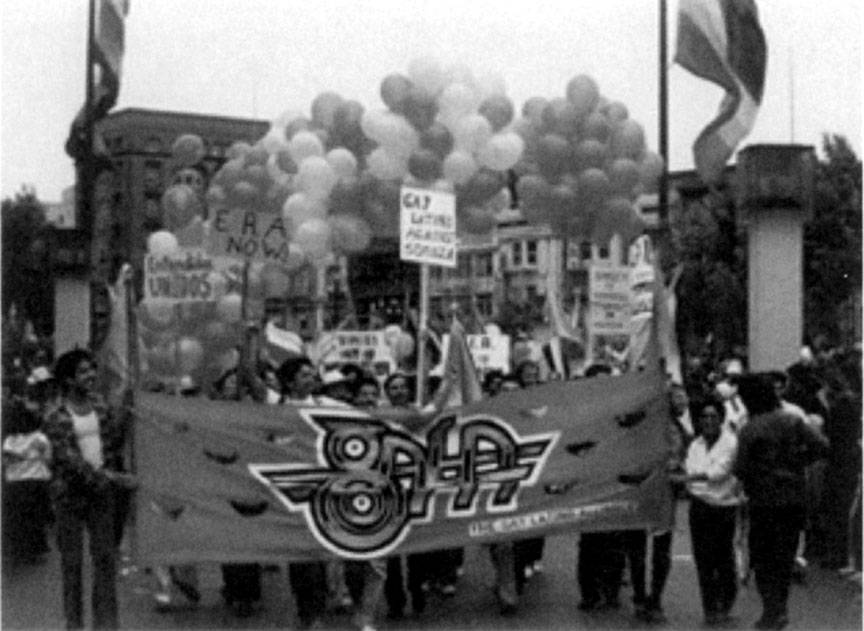 The GALA float in the 1976 San Francisco pride parade.

Over the course of the 1970s, the crowds at the Lesbian and Gay Freedom Day parades in San Francisco swelled to the hundreds of thousands and it appeared that the gay and lesbian movement was now unified and diverse. Yet, the movement that was growing in the Castro was increasingly a “white middle-class gay political project” (Armstrong, 2002, p. 134). For those that weren’t included in this group of largely professional and affluent men, the 1970s were largely a time of exclusion. This exclusion was especially true for gay and lesbian people of color (Armstrong, 2002, p. 134).

For many in the Latinx gay and lesbian communities, it seemed that they were often faced with a choice of living in a mostly white gay community with racism or living in a community that rejected their sexual orientation. And even if they decided to join the gay community they often felt as if they had to leave part of themselves behind (Armstrong, 2002, pp. 147-148).

Particularly in the dominant culturally-conservative Catholic Latino culture, homosexuality was not seen in a positive light. Some activists in this space went so far as to say that "homosexuality is incompatible with Latin cultures" (Contreras, 2019, pp. 207-208). However, others, fed up with being unaccepted in the Castro, decided that they wanted to work to end the intolerance by the Latino community especially in the Mission District (Contreras, 2019, p. 10). Enter the Gay Latino Alliance, otherwise known as GALA. 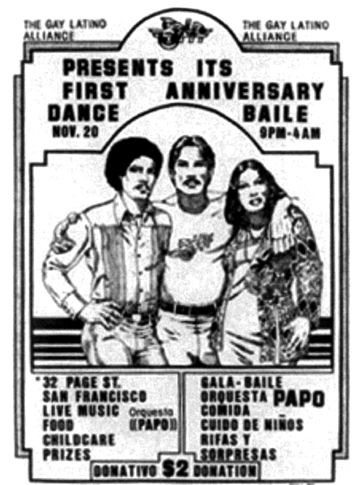 The poster for the first-anniversary GALA dance.

Started via a magazine ad, the Gay Latino Alliance was formed in November 1975 (Reyes, 1981) and served as one of the first gay Latino associations to gain visibility in the US (Cabello, 2019). GALA first came around when Rodrigo Reyes, Manuel Hernandez Valdez, and Jesús Barragán met at a dinner party in Barragan’s San Jose home (Cabello, 2019, p. 588).

In 1971, Rodrigo Reyes, a Latino gay male, moved from Texas to San Francisco and attempted to join the white gay nightlife in the Castro (Cabello, 2019, p.587). There he found that he was discriminated against, sometimes being asked for two forms of identification to get into a gay nightclub, while white males weren’t even asked for one. (Roque Ramírez, 2003, p. 234). Rodrigo started longing for a Latin gay community, but it wasn’t until 1975 when he decided to take action. A friend took Rodrigo to a Latin gay bar in Los Angeles, and the bar was “full of nothing but Chicanos and Mexicans” (Roque Ramírez, 2003, p. 234) and it was then that Rodrigo saw what the community in San Francisco could be. Rodrigo came back and published an ad in the Bay Area Reporter—a local gay newspaper—searching for “Gay Chicano[s]” to form a community group tailored specifically to their needs. (Cabello, 2019, p.587).

Two friends in San Jose, Manuel Hernández Valdez and Jesus Barrágan replied to the ad posted by Rodrigo, and together they hosted a dinner party with a small community based in San Jose and some people from Rodrigo's San Francisco circle (Cabello, 2019, p.588). All in all, there were 15 people at the first meeting. The goal was originally to  “define strategies to include a Latino float in the upcoming San Francisco gay parade”, but as more people came the discussion shifted to the racial and social politics of San Francisco and the 15 people decided to form a group to recruit for their cause. They decided that their main constituency would be found in the Mission and Castro districts of San Francisco rather than in San Jose but knew that there might be other Latinos they could reach by posting flyers in the bars of the Tenderloin and at Polk Street (Cabello, 2019, p.588).

Soon, the first meeting of the then-unnamed organization was held at the Society of Individual Rights, where the name “Gay Latinos Unidos” was pitched, but eventually, the group settled on Gay Latino Alliance or GALA because of the pronunciation “Gay-la” (Cabello, 2019, p.588)

The group itself was officially open to men and women from the beginning, but it often focused on the heavily on the needs of males. At the first meeting, there were a few lesbian Latinas present, such as Diane Felix, who like many others had never participated in gay organizing before (Reyes, 1981, p. 3). Unfortunately, the group would continue to have issues with lesbian Latina women also searching for community. Officially, the group founders changed the name to the Gay Latino/Latina alliance, but the group colloquially continued to go by the Gay Latino Alliance (Roque Ramírez, 2003, p. 226). 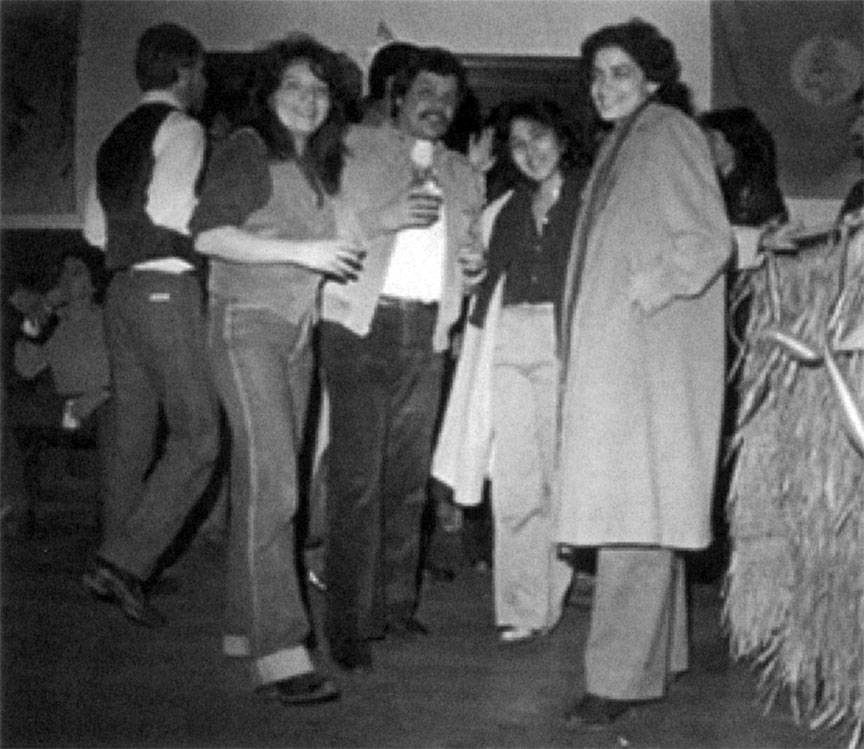 Overall, GALA wanted to be a place to express gay and lesbian identities in Latino communities, to create a space that never existed before. In order to achieve this goal, the organization became both a social and political organization. GALA put on fundraisers and marches but also dances and drag balls (Cabello, 2019, p.588). They "coordinated social functions, offered peer support to individuals as they came to terms with their sexual identities, referred gay Latinos to places where they could access social services, participated in gay pride events and built alliances with other local gay organizations" (Contreras, 2019, p. 209).

At the same time, they knew that to gain acceptance in Latin communities they needed to interact with heterosexual events and groups to show “the humanity of gay people” in order to “fracture the [Latino] culturally conservative views about homosexuality” (Contreras, 2019, p. 209). Sure enough, GALA managed to integrate and rally other heterosexual political Latino organizations by focusing on the similarities between gay and Latino political issues such as immigration, labor, violence, discrimination, and racism.

Being in the Mission District at the time, and being so close to the Castro, the group was fundamentally made up of people who were trying to bridge two parts of their identity, but the group made a conscious effort to be a part of the Latino community and not a subgroup of the white gay community. The main goal was not to negotiate between the Latin and white-gay community in San Francisco (Cabello, 2019, p.588), but eventually, this led to increasing tensions between the GALA and the white gay community (Cabello, 2019, p.589). Tensions only continued to rise as more white affluent gays moved into the Mission District, creating a rise in rental prices. This influx was seen as a threat to both the heterosexual community and GALA, with the local newspaper El Tecolote calling the resulting speculation "malignant cancer" (Roque Ramírez, 2003, p. 247).

Racial tension hit a breaking point on October 29, 1977, when GALA held a forum for candidates running for supervisor under the new district system. On one hand, District 6 white gay leaders supported lesbian Carol Ruth Silver, while GALA supported straight Latino candidate Gary Borvice (Cabello, 2019, p.588). In the forum, GALA members spoke about the resentment it had towards gay whites and called Latinos who supported Silver as sellouts (Roque Ramírez, 2003, p. 245).

This event was seen as the beginning of the end for GALA, but the nail in the coffin for GALA was ironically the opening of the gay Latino Bar Esta Noche in the Mission. GALA began to hold meetings at the bar, which further excluded women from GALA because of harassment that began to occur at the Esta Noche bar towards women bartenders and lesbian clientele (Roque Ramírez, 2003, p. 256). It would take some time, but eventually, Diana Flores created the monthly club Colors to create a space for lesbian Latinas to socialize in a comfortable space.

The bar also had the effect of cutting off the main source of revenue for GALA because it siphoned off the main audience for their fundraising dances (Cabello, 2019, p.589), and although created by former GALA members, the bar was run very much as a profit-seeking business and did not care much for social or political causes. Without its funding, GALA dissolved by 1983 and the gay and lesbian community seemed much more fragmented than it seemed at the Gay and Lesbian Freedom Day parades of the 1970s.