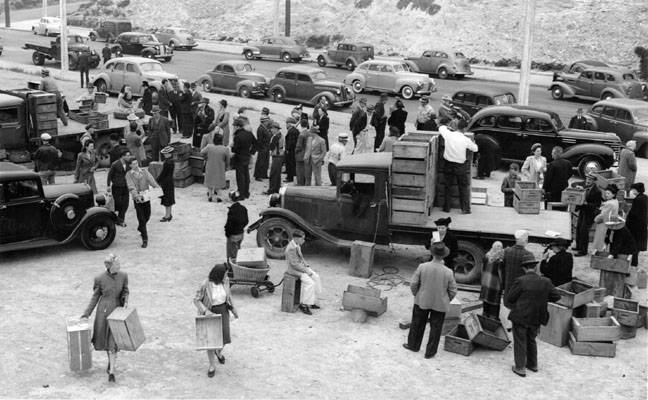 The wholesale produce district under today's Embarcadero Center in downtown, proved incapable of getting fresh produce from the surrounding region to San Franciscans' tables at a reasonable price during the early months of WWII, leading to the founding of the first Farmers' Market in 1943.

World War II led to a momentary lapse in corporate food production for the consumer market, leading to the popularization of "victory" gardens, small home vegetable plots intended to aid the war effort. In San Francisco alone, there were as many as 70,000 such home gardens. Shortages of food during the war led some to look for other ways of procuring food for urban populations. In San Francisco, this effort led to the creation of the San Francisco Farmers Market.

"This little lesson in primitive economics started San Franciscans thinking. It was about an age-old question. Who's getting all the money between the producer and the consumer? They reasoned that something must be wrong with our system of food distribution when they paid such high prices in the city, while within a radius of 35 miles the farmers couldn't give their crops away." --John G. Brucato, founder of the San Francisco Farmers Market, 1947

The head of the San Francisco Victory Garden Council, John G. Brucato, became concerned after hearing about large amounts of fresh fruits and vegetables going to waste in nearby farmlands, mostly small family farms run by European immigrants. Consumers were continuing to pay high prices for produce in the city, but nearby farmers were receiving much less from canneries and wholesalers. Brucato decided to help consumers make a direct connection with the farmers and inform the public about farm surpluses. As Brucato explains:

"Hungry San Franciscans, resentful of the high prices for fruit and vegetables in retail stores, could then pool their cars and go directly to the farmer. In many cases, they would do the actual picking, settle on a fair price, and drive home loaded with food. Frequently they would can the fruit on a community basis. The city dweller benefited and the farmer was grateful for any outlet for his surplus crop."

The consumer-farmer exchange was so successful that another bigger, bolder plan was hatched whereby farmers would come to town with produce, and sell directly to the city people. A 72,000-square-foot vacant lot at the corner of Market Street and Duboce Avenue was chosen. On opening day, August 12, 1943, the lot was jammed with over 1,000 buyers, and dozens of farmers' trucks with fresh produce. By the third day, an estimated 50,000 people had walked off with produce from over one hundred farmers trucks. A great success, the Farmers' Market opened the eyes of many people to the wisdom of organizing alternative means of procuring foods. It also educated the public to the inevitable conflict arising from tampering with the lucrative business arrangement enjoyed by big wholesale grocer operations. Farmers reported being intercepted on the roads by men offering them cash to turn around and go home, and various state and city officials tried to find ways of shutting the market down. 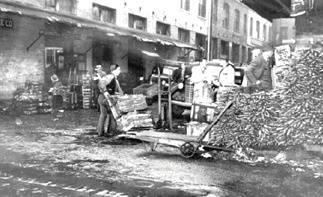 A pile of bananas at the Old Produce Market in downtown San Francisco.