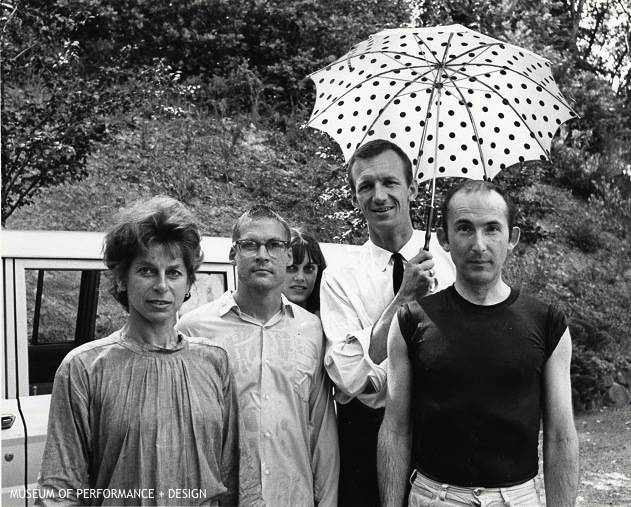 The event I was in was truly a “happening” because it did just that – it happened – that’s all – happened.

Early in the week, the secretary of Dancers' Workshop called my sister-in-law, Beryl Landau and me to ask us to wear warm clothing to our Thursday night dance class and to bring umbrellas. It was not during the rainy season (it never rains haphazardly here – like in the east.) Arriving to class, we were only somewhat surprised when our teacher, “A.A.” Leath, a great dancer and teacher who works with Anna Halprin, announced that were going to the Civic Center Mall and dance as part of the San Francisco Art Festival. I stop here to fill you in on A.A.'s classes.

First of all, when A.A. says “dance” he means “move.” To him a moustache moving through space with the energy and rhythm of its owner’s speech as the upper lip propels it, is a dance. Our classes are not the usual torturous exercises followed by “improvisations” incorporating the day’s exercises. We expend great amount of physical energy (that's the workout value of the class) and are asked to “attend to” and respond to our own movement, so that we experience each breath, each tension, twist, stretch or run. We are running and at the same time “attending to running” by experiencing ourselves running.

Anyway, we piled into cars – full of anxiety and excitement – about to make fools of ourselves in public. I can't even walk into that class and not be excited. We arrived at the park across the street from the festival, which was a series of art exhibits and crafts booths on a grassy section between two public buildings. This absurd park is wedged between two public buildings with trees in flowerpots, a rectangular fountain, rectangular stone benches and stone walks. It has almost no grass because the City is waging a campaign against the homeless, the vagrants and the aged who read, sleep and use the toilet in the Main Branch Library. They used to sun bathe on the former grassy zones of this park. Now they sit catatonically on the stone benches. 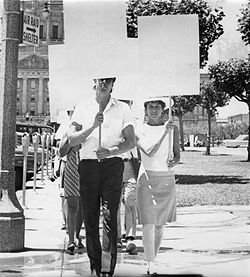 Anna Halprin, Blank Placard Dance in San Francisco Civic Center, 1967, a few years after the account described here.
We arrived at night – where do they go at night? – there was no one else in the park but us – although the festival area across the street was filled with P.A. system record noise and viewers strolling through the exhibits. There was one other performance group besides us, the Tape Music Center – they're an electronic music group with which Dancers' Workshop is loosely affiliated. They had their million billion dollar equipment set-up as an exhibit. Out of it came the usual intense sounds associated with electronic music punctuated with electronic farts & belches that was irritating to the ears but yet engaged emotions. At first, I couldn't tell that I was affected and drawn into it

A.A. designated himself and someone else as “leaders”. We were to do as they did. Our two groups went off in separate directions. I followed A.A. We opened and shut our umbrellas held them overhead, looked left and right, sat, stood, ran, and pondered the fountain. Slowly the crowds drifted across the street to see and hear the “strange music” and the two rows of people moving about with umbrellas when it wasn't raining nor was the moon shining brightly enough to warrant an umbrella.

There were moments when I closed my umbrella as a participant in a game of “Follow the Leader”, closing the umbrella was merely keeping the rules. Other times, I was an actor hoping to have a special effect on the audience, usually to shock or upset them, which are such shabby goals. Then, there were the moments when I would “experience or attend to” the act because it was in concert or because of my relationship to its suddenness or its silence. There were looking left and right experiences and sitting on a stone bench under a big black umbrella sensations. The audience walked among us but our concentration was mainly between ourselves, our umbrellas, and sometimes our communal desire to disturb them.

There were no rules for behavior. We had license and freedom. We made ourselves the norm – a trail of umbrella openers and closers weaving our way between the trees. We made the audience, the eccentrics. It was as if we had invented new rules but hadn't told them – so they could only gawk – but we could run across the grass, umbrellas sailing and brood in the fountain.

We returned the next night but this was more of a performance, improvisational – but a performance nonetheless. Somehow or other we seized a well-lit stairwell leading from an underground garage as our stage. The improvisations changed with major characters like a lyric strange lady in an eerie Mad Woman of Challot costume, a skin diver and a fairy queen with an entourage of children holding her parachute skirt, silken and floating wandering through our small band of umbrella holders. 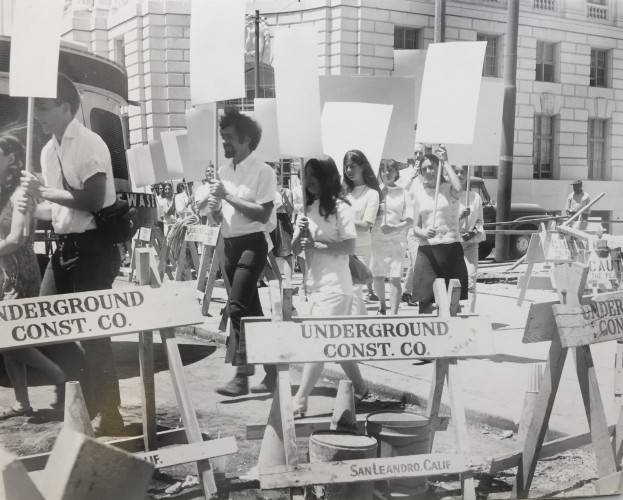 When I came home I was burning with confusion. The second night being a performance, was something familiar and yet so alien. The first night felt more personal – it was an event for us, for me- an exertion of will – that A.A. could lead us into this public/private act right in the center of town. It had the exhibitionist quality of picketing without the morality & sense of civic responsibility to hide behind. It was just unabashedly calling attention to ourselves for our own sakes or art for art’s sake.

I still don't know what I think about this. I only know the feelings, and these are not in the province of words. 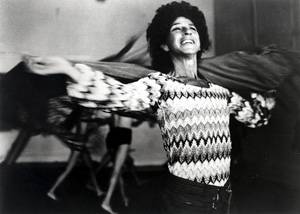