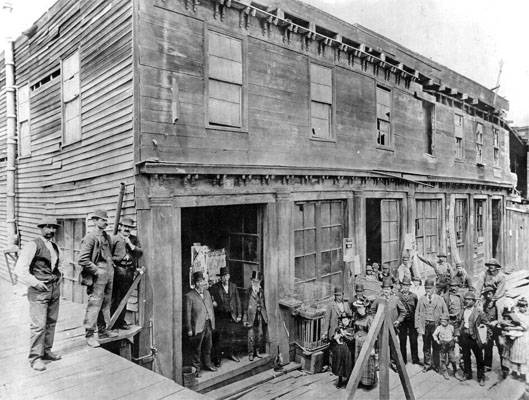 A famous drinking establishment was the Cobweb Palace, run by Abe Warner, a lover of spiders, who let them spin their webs without interference. The webs hung were festooned across the ceiling and down the walls.

Mid-nineteenth century San Francisco demanded entertainment. Pockets jingled with gold. The mines, the burgeoning shipping business, the merchant trade, and wild speculation fueled a runaway economy. Keyed to a fever pitch, the City wanted to play to blow off steam. San Franciscans were soon to show the world that they were not only getting rich, but knew how to spend it as well.

Abe Warner opened his Cobweb Palace at the foot of Meigg's Wharf on the northeast corner of Francisco and Powell Streets in 1856. His establishment earned its name by the curtains of cobwebs hanging from the rafters. Abe admired both spiders and their webs. Crowds gathered at Abe's tavern to view his extensive collection of oddities.

The Cobweb Palace displayed scrimshaw carved from sperm whale teeth and walrus tusks. Totem poles from Alaska adorned the entryway. Wonders from the Orient included Japanese No masks. War clubs and the like from the South Pacific and taxidermy of all sorts joined the collection.

Abe's live menagerie included trained parrots, monkeys, and various small animals as well as the occasional bear and kangaroo. One parrot named Warner Grandfather often spouted, "I'll have a rum and gum. What'll you have?" He swore in four languages and enjoyed the freedom of the saloon. 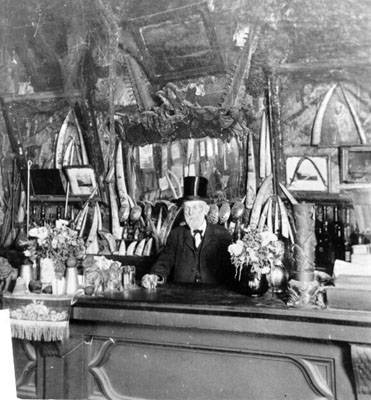 An old crippled sailor sat outside Abe's bar selling peanuts to young couples and children. Meant for tourists, the peanuts often found their way from little hands into the mouths of the parrots and monkeys. All manner of food and leftovers fed the bears. Abe spent almost nothing feeding his animals.

A visit to Meigg's Wharf offered a day of excitement. More than just a hangout for sailors and sea captains, Meigg's Wharf and the Cobweb Palace exuded a carnival atmosphere. On any Sunday, young couples and families strolled on the wharf, taking in the sights, visiting the shops, testing their skill at the shooting gallery, and sampling Abe's free chowder. The Palace offered a new experience for the locals and tourists: pier-side dining. The Dungeness crabs were sweet, succulent, and sure to please. Customers dined on simple fare of cracked crab, clam chowder, mussels, and an excellent local French bread. 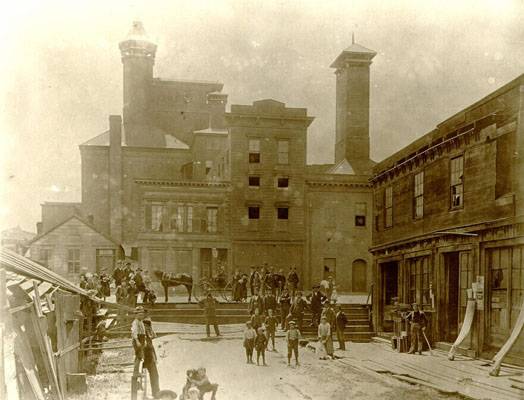 Abe had a fancy for tawdry paintings of nudes, and reputedly collected over a thousand. Dust and cobwebs obscured most of those hung on the walls. He was a tidy man, well groomed and of good reputation, the cleanliness of his bar notwithstanding. Abe held court over all from his usual position behind the bar. Though the drink of choice at Abe's was a hot toddy made of whisky and gin boiled with cloves, he also served the finest liquors and brandies from France.

Abe Warner retired in 1897 at the age of 80. By then, the state of Meigg's Wharf reflected a serious decline in business. The shipping trade returned to the piers by the new Ferry Building where the wide Embarcadero Road and new rail lines could quickly dispatch goods.

A breakwater surrounded Meigg's Wharf in the late nineteenth century, and the later landfill to that breakwater put the location of Abe's Cobweb Palace inland. That location, 2200 Powell Street, now houses a U.S. Post Office branch, over four blocks from the Embarcadero and the Bay.