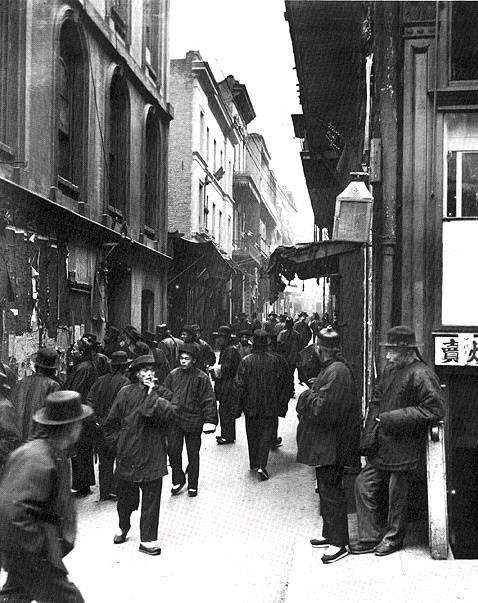 Immigrants from China first arrived in the 1840s, driven by poverty, hunger, and harsh economic conditions in the southern part of China where most of them originated. Most Chinese immigrants entered California through San Francisco and found work in railroad construction, mining, and agriculture.

Chinese immigrant laborers first began working on the transcontinental railroad in 1865, when fifty were hired by the Central Pacific Railroad on a trial basis. Railroad officials soon realized they could pay Chinese workers less than their Irish counterparts and began recruiting heavily from the mining camps. Railroad owners began advocating for more generous immigration policies towards China. One investor, Leland Stanford, a one-time candidate for governor who actively denounced Chinese immigration during his campaign, openly advocated for the immigration of 500,000 more laborers from China. Many Chinese workers lost their lives from overwork and accidents while blasting the railroad through the Sierra Nevadas. Fed up, thousands of Chinese railroad workers went on strike in 1867 to protest their wages and hours. When business officials cut off the strikers' food supply, they were forced to give up.

After the completion of the railroad in 1869, ex-railroad workers joined ex-miners in flocking to San Francisco's Chinatown seeking other employment. Like other immigrant communities past and present, the Chinese established their own institutions and businesses in the growing Chinatown. They became a "bachelor society," since immigration laws seeking to bolster the business owners' supply of cheap labor actively discouraged the formation of families by severely restricting the immigration of Chinese women. By the 1880s, men in Chinatown outnumbered women by approximately 20 to 1. The gender imbalance encouraged prostitution rings that preyed upon young women from China, who were often forced into sexual slavery.

Economic depression in the 1870s intensified prejudice against the Chinese. Resentful white workers, spurred on by labor organizers like Denis Kearny, fought to keep Chinese laborers out of California. Racist sentiment also fueled the passage of discriminatory taxes and other practices, utilizing the 1790 Naturalization Act that restricted citizenship to "white" persons. The Chinese Exclusion Act of 1882 prohibited further immigration from China. It was renewed in 1892, and finally made permanent in 1902.

The 1906 earthquake and fire proved both disastrous and fortuitous. Chinatown itself was leveled. While efforts were made to move the Chinese sector away from San Francisco's lucrative central district when it was rebuilt, the courts finally ruled that the Chinese had the right to build on sites they owned. Most significantly, the destruction of city records allowed many Chinese men to claim they were citizens whose records had burned in the fire. As citizens they had the right to bring wives and children to the U.S., and sold citizenship rights to young men in China who became their "paper sons." Many of these immigrants came through the Immigration Station on Angel Island, in operation from 1910 to 1941, and spent up to several years being detained in cramped quarters and closely cross-examined about their "family connections."

The exclusion acts were repealed in 1944, when the U.S. needed China as an ally in World War II. Immigration was still effectively restricted by tiny quotas, until the 1965 Immigration Act which repealed all quotas in favor of a family-based reunification policy. Since then, many Chinese immigrants have come to San Francisco, revitalizing not only Chinatown but creating new Chinese neighborhoods in the Richmond and Sunset Districts. Many have come seeking refuge from political instability in China, in the wake of the Revolution of 1949, and most recently from Hong Kong, where the handover of the former British colony to China in 1997 prompted many to migrate. Chinatown is unique in San Francisco for being a homogeneous neighborhood that has remained Chinese for a century. With the recent changes, however, there has been growing diversity of immigrants from different parts of China and Chinese territories, creating some friction between old-timers and newcomers.