Bernard Ralph Maybeck was born February 7, 1862 in New York City, the son of German immigrant parents. His father Bernhardt was a cabinet maker, specializing in architectural carving, who had emigrated to the United States in 1851. Bernard's mother, Elisa, died when he was three and he was brought up in his maternal grandfather's house. At private schools in New York he obtained a broad liberal arts education, including French, German, philosophy and the arts. In 1881 his father arranged for him to be apprenticed in Paris. Soon after arriving there, Maybeck applied to enter the prestigious architectural school, L'École des Beaux-Arts. After five years of intensive training, based in the atelier of Jules André, Maybeck had completed the equivalent amount of work to French students who were awarded the diplome. Maybeck returned to New York in 1886 and started work for the newly-formed firm of Carrère & Hastings, contributing to the designs of two Florida hotels, the Ponce de Leon and the Alcazar.

By 1889, Maybeck was ready to establish his own practice and selected Kansas City as the location. However the nationwide economic depression of the late 1880's meant that there were few opportunities there. While in Kansas City though, Maybeck met the White family, including father Henry, sons John and Mark, and daughter Annie. In 1890, Willis Polk encouraged Maybeck to move out to San Francisco. Maybeck proposed to Annie White and they relocated to the Bay Area, settling in Berkeley. Annie became his secretary and business agent, as well as his lifelong companion.

In San Francisco Maybeck worked first for architects Wright & Sanders and then, for a year, as an interior designer. In 1891 he joined the office of architect A. Page Brown, contributing to the design and then supervising the construction in Chicago of the California Building for the 1893 World's Columbian Exposition, and later working on the Administration Building and the Manufactures and Liberal Arts Building for the 1894 Midwinter Fair in San Francisco.

In 1894, the Reverend Joseph Worcester, pastor of the Church of the New Jerusalem and an architectural patron in the City, commissioned Brown to design the Swedenborgian Church at the corner of Lyon and Washington streets in Pacific Heights. Along with Maybeck, architect A. C. Schweinfurth, and artists Bruce Porter and William Keith also collaborated on the design. Examples of all of their contributions to the final result may still be seen in the Church. Author Charles Keeler, for whom Maybeck had designed a home in the Berkeley hills, writes about the mutual respect of Worcester and Maybeck and clearly attributes the design of the church to Maybeck. Thanks to a long effort by church elders and staff from the award-winning architectural and historic preservation company, Architectural Resources Group, the church is now in the final stages of being added to the National Register of Historic Places

As work on the Swedenborgian Church neared completion, Maybeck was invited to apply for a position of instructor in descriptive geometry for the Civil Engineering College at the University of California, Berkeley, for the fall semester of 1894. So began an involvement with U.C. which was to last until 1903 and included his organization of a worldwide competition, funded by Phoebe Apperson Hearst, to create a comprehensive and permanent plan for development of the University. Maybeck also encountered several students, such as Lewis Hobart, Albert Lansburgh, and Julia Morgan, who were more interested in architecture than engineering. Maybeck began teaching them architectural design and encouraged them to attend L'École des Beaux-Arts in Paris, as he had done. With Maybeck's help, Julia Morgan became the first woman to be formally admitted.

In 1895, Maybeck was also appointed Director of the Architectural Section of the Mark Hopkins Institute of Art, which was located in the Gothic mansion on Nob Hill designed by Wright & Sanders for Mark Hopkins, treasurer of the Central Pacific Railroad. Hopkins had died before its completion in 1878. Hopkins wife Mary remarried in 1881. Her second husband, Edward Searles, was an interior designer and art collector. When Mary died in 1891, Searles inherited most of her fortune and generously donated the mansion to the San Francisco Art Association in 1893.

Also in 1895 the Maybeck's invited the rest of the White family to join them after Henry White was forced to retire from teaching in Kansas City due to ill-health. Annie's brothers John and Mark White would work in collaboration with Maybeck at various times for the rest of his professional career. Maybeck opened his own office in 1895 at 307 Sansome Street, which was later lost, along with all of his records, in the 1906 earthquake and fire. In 1907 Maybeck opened a new office at 35 Montgomery Street.

During Maybeck's long career he designed over 150 buildings in California, the majority of them being houses in Berkeley, but with several in San Francisco. Two of the earliest, in1909, were in Presidio Heights - a townhouse for Samuel Goslinsky at 3233 Pacific, and the much larger Tudor-style corner house for Leon Roos at 3500 Jackson, now San Francisco Landmark #56.

In 1910, Maybeck was selected to design the First Church of Christ, Scientist, in Berkeley, now widely regarded as an architectural masterpiece. Much later he was to design Principia College in Elsah, in Jersey County, Illinois, also for the Christian Scientists. Maybeck's involvement with Principia began in 1923 and lasted until 1940, carrying his San Francisco office through the Depression. Eleven of Maybeck's original buildings remain, nearly all steel-framed or reinforced concrete construction. In 1993 Principia College was added to the National Register of Historic Places.

Maybeck's best known legacy to San Francisco architecture is the Palace of Fine Arts and Lagoon, designed for the Panama-Pacific International Exposition of 1915. Willis Polk was the Chairman of the Board of Architects for this World's Fair. Polk conceived a 'Walled City of Palaces' for the Exposition and was so impressed with Maybeck's initial sketches for the Fine Arts building that he turned over its design to him. Maybeck kept part of the site from being filled, to form the lagoon. Much has been written about the Palace itself, with its magnificent domed rotunda, the semi-circular peristyle, the Corinthian columns, and the curving gallery in which the valuable artwork was exhibited. Maybeck himself wrote .... I find that the keynote of a Fine Arts Palace should be that of sadness modified by the feeling that beauty has a soothing influence. 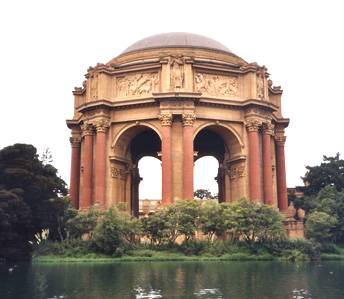 When the Exposition closed in December 1915, despite an attempt to preserve the entire site, only the Palace of Fine Arts, built on Presidio land, was saved. The remainder of the site had been privately owned and was sold for development, becoming the Marina residential district. The Palace of Fine Arts was rebuilt in the 1960's in concrete, thanks to the effort and financial support of philanthropist Walter S. Johnson, and its art gallery now houses a theater and the Exploratorium. Recently, the Maybeck Foundation has embarked upon a three-year $15 million campaign to restore the Palace to Maybeck's original plans.

In 1951 Maybeck was the first Bay Area architect to be awarded the American Institute of Architects Gold Medal of Honor. In a recent AIA poll, Maybeck was ranked ninth on a top ten list of the greatest architects this country has ever produced. He died on October 3, 1957 at the age of 95, one year after his beloved wife Annie.