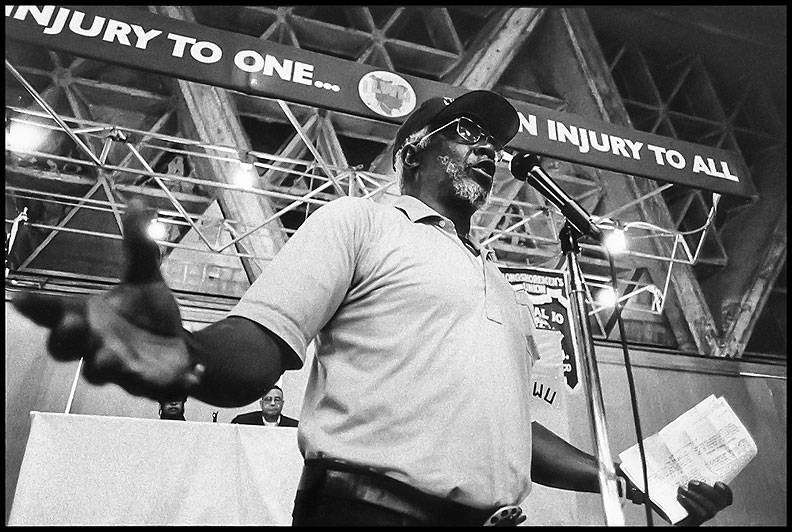 In November of 1984 members of ILWU Locals 10 and 34 refused to unload the Nedlloyd Kimberley at Pier 80 in San Francisco for eleven days, because it was carrying South African cargo. That action was organized by a group of people in those locals that included Leo Robinson, Dave Stewart, Larry Wright, Alex Bagwell, Jack Heyman (then IBU), A.J. Mitchell, Tom Lufer and perhaps a dozen others. They had all been involved in one way or another in the 1978 conference on solidarity with the South African Congress of Trade Unions (SACTU), and had been talking for some time about taking action.

During those 11 days, there were huge picketlines at Pier 80, as hundreds of people came out to support the action and provide the workers with a reason under their contract for refusing to go to work. The Pacific Maritime Association (PMA) went to Federal court to get an injunction against Local 10 to force it to work the ship. To avoid huge fines and its officers possibly going to prison, the local eventually unloaded the ship. But the people who had been picketing then went across the Bay, and began picketing the Pacific Maritime Association offices on Grand Avenue and Harrison to protest the PMA’s decision to get the injunction.

Daily picketlines went on for a year, and then on a weekly basis for a year after that. The Bay Area Free South Africa Movement was born in those demonstrations. It was headed by John George, and had two co-coordinators--Franklin Alexander and Lorenzo Carlisle. Later two others were added--Natalie Bayton and David Bacon. BAFSAM then began holding regular meetings at the First Universe Baptist Church on International Boulevard in East Oakland. With BAFSAM’s participation, the church set up a homeless shelter to connect the issues of racism and apartheid in South Africa to racism and economic oppression in Oakland. This was the period of big plant closures in Oakland, which were having a devastating impact on Black workers.

BAFSAM lasted as an active organization for about five years, and carried out the fight for the Oakland divestment ordinance, the strongest in the country at the time. It was the pattern for legislation that Congressman Dellums then took to Congress. BAFSAM also organized many marches and demonstrations in Oakland.

The Bay Area Free South Africa Labor Committee began as an outreach committee to get labor support for the longshoremen, and the picketlines at PMA. It then became an autonomous organization. The FSALC was active for about 10 years, from 1984 to 1994. David Bacon, then an organizer for Molders Union Local 164, was its chair for the first few years. Then its chair was David Shelton, president of the San Francisco school bus drivers. Among its most active members were Kathy Black, Darryl Alexander (she and David met in FSALC meetings and later got married), Frank Pottier, Maddie Oden, David Reed, Roland Anolin, Bobby Williams and others. It was a multiracial committee with Black, Asian American and white members. During its lifetime the committee organized many campaigns:

• FSALC and BAFSAM organized a series of civil disobedience actions at the PMA in which dozens of people were arrested. Wilson Riles Jr., BAFSAM leader and city council member, was running for Mayor, and then-Mayor Lionel Wilson ordered the police not to arrest him to deny him publicity. Dozens of others were arrested, however. Many national labor leaders came down to the noontime demonstrations, despite the fact that the AFL-CIO would not support them at first. It was a long struggle to change that position, but because of the ILWU challenge and the growing movement organized by FSALC, Randall Robinson and TransAfrica convinced AFL-CIO President Lane Kirkland to get arrested in the first civil disobedience at the South African Embassy a year later.

• FSALC and others went back to Pier 80 to picket other ships. Many were arrested for blocking the gates and stopping trucks from going in or out. Arrestees had to spend two years going to court over the charges, which were eventually dropped.

• FSALC organized a labor conference in San Francisco, and as a result set up a network up and down the Pacific Coast. For the two years after the Pier 80 arrests anti- apartheid activists, mostly in unions, chased the ships carrying South African cargo. They organized picketlines, and sometimes arrests, in San Francisco, Los Angeles, Portland, Seattle and Vancouver, Canada. Other ILWU locals got involved, along with labor activists from the solidarity movement with the struggles in Central America and the existing SACTU support committees in the Canadian unions. Eventually the demonstrations forced Nedlloyd Lines to stop its South Africa service into West Coast ports.

• FSALC helped organize labor anti-apartheid committees in Portland and Seattle, and together worked on joint conferences, demonstrations against South African trade, support for SACTU and the ANC, and to change the policy of the AFL-CIO.

• FSALC worked with locals and labor councils throughout the Bay Area, passing numerous resolutions supporting SACTU and the ANC. During most of this time, the AFL-CIO leadership called the ANC and SACTU terrorists, because they were allied with the South African Communist Party. Lane Kirkland even gave a medal to Gatsha Buthelezi while he was murdering members of the United Democratic Front in Natal. The FSALC exposed the activities of the CIA-affiliated African American Labor Center, and distributed in the U.S. reports by the Congress of South African Trade Unions, which documented the efforts to bribe and corrupt leaders of the rising South African anti-apartheid labor movement.

• FSALC developed a close working relationship with the South Africa Congress of Trade Unions, then a banned organization in South Africa before COSATU was formed. SACTU had an office in Toronto, and its representative Bamgumzi Sifingo came to the Bay Area several times to meet with Bay Area activists. FSALC raised money for SACTU and the ANC, and with the San Francisco Anti- Apartheid Committee, filled a truck with donations and drove it to Toronto (in a blizzard). FSALC organized visits by SACTU leaders, including John Gaetsewe, Muzi Buthelezi and John Nkadimeng, and took action at their request to support the underground movement in Africa. SACTU leaders met with California labor leaders, and spoke to workers at hospitals, foundries, warehouses and other workplaces. Hundreds of rank-and-file union members heard them and many became involved in the movement. FSALC worked with the Peoples’ Daily World to invite to their annual banquet Chris Hani, head of the ANC’s armed wing Umkhonto we Sizwe, not long before he was assassinated, and then-exiled ANC leaders Pallo Jordan and Thabo Mbeki.

• Together with the Human and Civil Rights Committee of the public workers union SEIU Local 790, FSALC organized a campaign to "work a day for freedom in South Africa." Hundreds of Local 790 members donated a day’s pay to the South Africa Municipal Workers Union, which was then illegal and its leaders in prison. FSALC activists in the Amalgamated Transit Union discovered that AC Transit was buying windows for their busses from South Africa, and made them stop.

• Together with Bay Area labor councils, FSALC organized demonstrations and civil disobedience, including arrests, at the office of South African Airways on Union Square in SF. The demonstrations forced the airline to shut its office and leave. FSALC supported the efforts to get the University of California to adopt a divestment ordinance, led by campus unions including AFSCME, by students (who organized tent encampments on campus), and by California Labor Federation Secretary-Treasurer John Henning, who was a UC regent.

• FSALC published a regular newsletter for many years, bringing news of the ANC and South Africa’s growing labor movement to workers, union members and anti-apartheid activists in California. It was eventually circulated around the country, since it was often the only U.S. source of information on the South African labor movement. FSALC consistently showed that SACTU, and later COSATU, were formally allied with the other organizations of the liberation movement, the ANC and the SACP. FSALC argued that it was not possible to support workers rights in South Africa without supporting the liberation struggle as a whole.

• FSALC helped unions to form union-to-union relations with SACTU, and later COSATU, unions in South Africa, including Local 790 with SAMWU and ILWU Local 10 with the South African Railway and Harbor Workers Union. Committee members participated actively in African American labor organizations like the Coalition of Black Trade Unionists, and the labor sections of anti-apartheid groups in New York, Chicago and St. Louis. When COSATU was formed, FSALC helped organize tours of its leaders, including COSATU general secretary Jay Naidoo, who was invited to speak at the AFL-CIO convention in San Francisco, and leaders of the South African Domestic Workers Union.

• After the Shell boycott was launched by TransAfrica and the United Mine Workers (who hired a South African liberation activist on staff), FSALC organized local boycott activities, including picketing gas stations. The Shell station at High and MacArthur in Oakland closed as a result, and has been an empty lot ever since.

These were exciting times. We met wonderful comrades in South Africa and here at home, many of whom became friends for life. Frank Pottier cooked some extraordinary French meals on the PMA picketlines, and those who ate them will never forget how good they were. We participated in the destruction of apartheid, and when Nelson Mandela came to Oakland and spoke at the Coliseum, recognizing the longshore workers for the role they’d played, FSALC members felt we also had played a part in those earth-changing events.

I will always deeply respect the courage of those who stood up in South Africa during the apartheid years, and those who took up arms outside to fight at Cuito Cuanavale and the other places where the spread of colonial fascism in Africa was defeated. Those who stood up here in the U.S., especially in the years when anti-apartheid activists were redbaited for doing it, can feel justly proud. 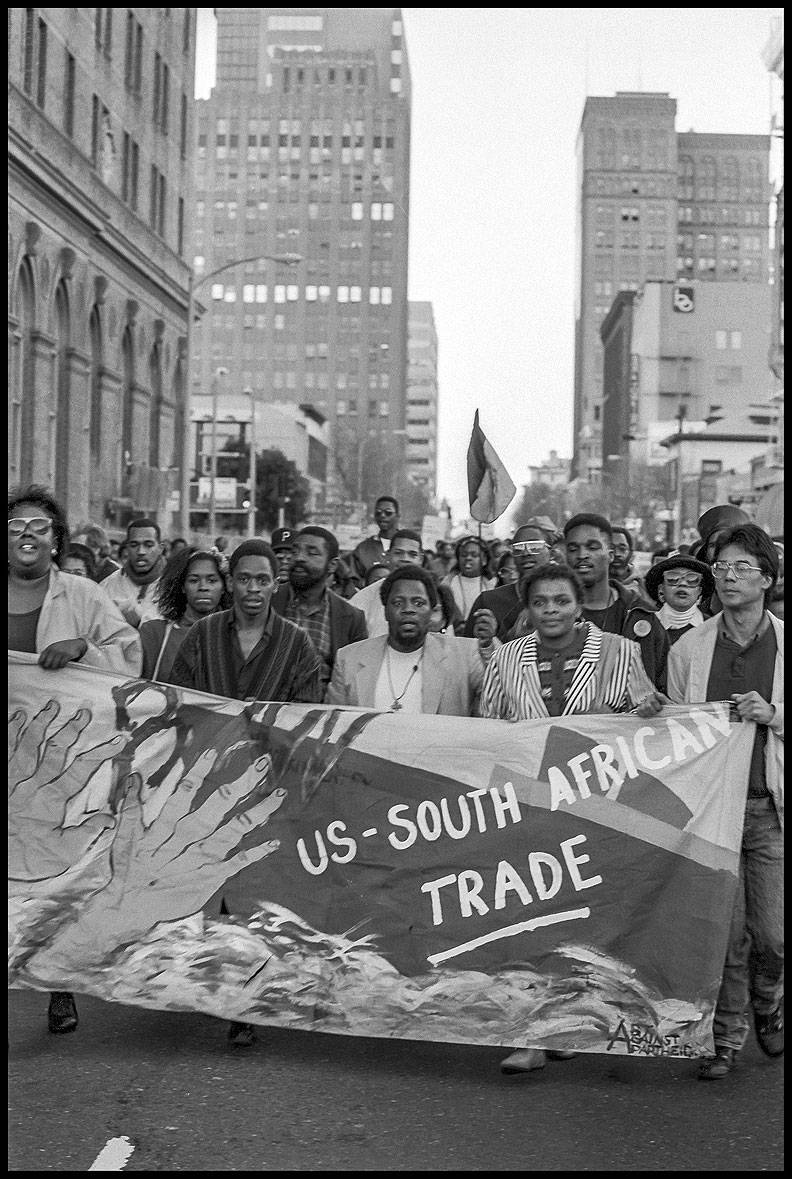 Celebrating the release of Nelson Mandela and the unbanning of the African National Congress and South African Communist Party, February 1990.