A Community That Fights 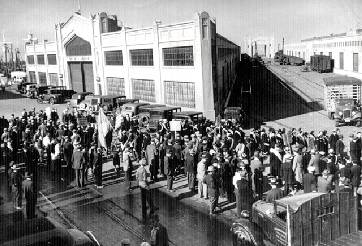 Demo against scrap metal to Japan, 1937

By the late 1930s, San Francisco longshoremen could walk the Embarcadero and work the docks and ships with a very considerable dignity. The most concrete expression of that dignity. . . was a quite extraordinary on-the-job militancy.

There were three distinct, yet frequently interrelated components to this militancy: (1) the enforcement of the contract, (2) an insistence upon safety, and (3) an insistence that the work proceed sensibly. Broadly speaking, an effective militancy could be exercised by the men simply because their employer was fundamentally dependent upon their initiative and good will. . . Because of the experience, skills and innovative talent which he brought to the job, the good longshoreman could routinely exercise a very effective job control when in his judgement that seemed necessary. . . The men upon whom the employer could most readily rely for a really first class stevedoring job and a very conscientious performance of the work were men who were viewed by their fellow workers as the very best of union men and the most militant of their union brothers.

The ability and willingness to undertake disciplined and well-planned job action, i.e., work-stoppages or mini-strikes of limited scope and short duration, became the very hallmark of the San Francisco longshoremen. . . While the men were destined to evolve a great number of ways of collectively expressing and, therefore, experiencing their community with one another, job action was for years the mass, democratic form. It was also the most direct, immediate and vibrant. As a collective expression and experience of community, job action was a veritable fountainhead of organizational lan and individual verve. By concretely reminding the men of the nature of their struggle and of the means whereby disputes and grievances might be resolved to their satisfaction, it was also destined to play a vital role in their evolution and self-education as a community. Hence, the militancy of these men was . . . the most complete expression and embodiment of their occupational satisfaction.