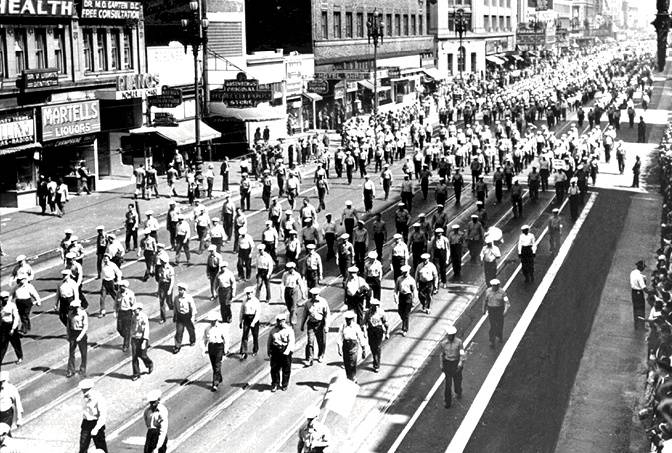 "The 1934 strike was the beginning. Once you had organized the waterfront you could begin thinking about changing the whole fabric of California's political and social life.

So 1984's the anniversary of that, and that had been an event that was just, in our union, it's like the birth of Jesus in a church. It's like this is when it all started, this is our whole spiritual center. This is what when a younger member comes we beat him or her up with, and it becomes a little empty at some point, it's "oh yeah, tell me something new. "

In 1984, we attempted to make something out of it. We hired some artists in the Mission who put up a beautiful ILWU mural mural down on Steuart and Mission, and we had a great party down at Fort Mason. Everybody came and looked at pictures and heard a few speeches, listened to music, and it was a really nice event. We also did some writing."

"The fiftieth anniversary celebration has many meanings. It is first of all a solemn memorial for the union men [and they were all men], who gave their lives on this coast in the summer of 1934, so that those who came after could achieve through unionism a greater measure of security and dignity. It is also a time to remember the men and women who paid their dues on countless picket lines, who were beaten, jailed, harassed by their employers. It is a time to remember all those leaders sprung from the rank and file and poured their life's energy into this union. [You know as I read this to you it sounds like such potboiler, but it's really true. There were generations and generations of people for whom the union was the center of their life, into which they poured everything in there, in a way I don't think we can understand.] We can look back at the past half century with enormous pride. Hundreds of thousands of working men and women got a better shake out of life because of what we have been able to do together. The group of essentially casual laborers welded themselves into an effective and disciplined fighting force, won a decent way of life and respect in the communities in which they lived. They laid the basis for a democratic and progressive labor movement for the whole coast.

More than anything else, it's a celebration of a rich and varied history. Many crimes have been committed against working people over the years, not the least of which is the destruction of our past. Educators and politicians have paid little attention to labor's contributions, and we as union members are not blameless. We have not really educated our younger members, we have not made the past come alive for them, and therefore we have denied them an honest and wholesome perspective on the present or the future. We can no longer afford the luxury of indifference or ignorance.

Over the past few years the labor movement has taken a series of body blows which have sapped its strength and have put it on the defensive. These attacks originate in the White House and trickle down to the lowest regional office of the National Labor Relations Board. They begin in corporate offices of companies like Louisiana-Pacific and Phelps Dodge [that was the enemy that month] and work their way down to even the smallest employers. We are concerned about the future of our jobs, the industries in which we work, the world that our children will inherit. We are therefore inclined more and more to look in the past for some sort of anchor to discover our roots. We don't want just a few names and dates, but a living, ongoing story in which we can see ourselves as actors as well as spectators.

So as we celebrate the 50th anniversary of the General Strike of 1934, it's time for a fresh look. Young workers in particular must look at 1934, and ask what relevance it has for them. For the generation of west coast workers who went through the Depression the answers are self-evident. The '34 Strike was the main event, their passage into first-class citizenship, by establishing a solid union presence on the west coast waterfronts. By doing away with the humiliation of the shape-up, the fink hall and the company union, the '34 Strike changed the face of the waterfront forever. The same might be said for the generation which came on during and after WWII. They may not have participated in the actual events of the strike, but their fathers and uncles did. As kids growing up in the 1930s they had seen the changes, whether it was the growing stability of their family life, the increased self-respect of the adults around them or a little more meat on the table. The generation of the '50s and '60s, the generation who put together the first pension and health and welfare programs, also understood that they were enjoying the payoff of the sacrifice of 1934. The Big Strike remained a vivid memory and was clearly responsible for their being able to enjoy a degree of comfort and security undreamed of by their parents.

But what are we to say to the young people of today, people who are separated from the '30s by the tremendous changes which have taken place in those years? For them, 1934 is a heroic dream, a golden age, when the labor movement was fresh and young, when things were simpler, a matter of right and wrong. What was so unique and so instructive about 1934 and in fact about the whole CIO experience, was that it was a creative response to change in society. Over the 50 years preceding the '34 strike, American industrial life had changed dramatically. The village blacksmith became a steelworker in a huge plant, the assembly line diluted craft skills. But we in the labor movement were still acting as if it were 1870 or thereabouts. Our little craft unions, jealous about our own spheres of control, only about maintaining our jurisdiction, our burial societies, the world was passing us by. So here we are again.

The creative part of the CIO ideas expressed on the waterfront was the unity of all workers. That meant the end of the competition between the skilled man and the casual. It meant the hiring hall and equal work opportunity. It meant a coast-wide contract so that ports couldn't be played off one against the other. It meant unity with the sailors. Industrial unionism on the west coast succeeded so well because it fitted the circumstances of corporate development so well."