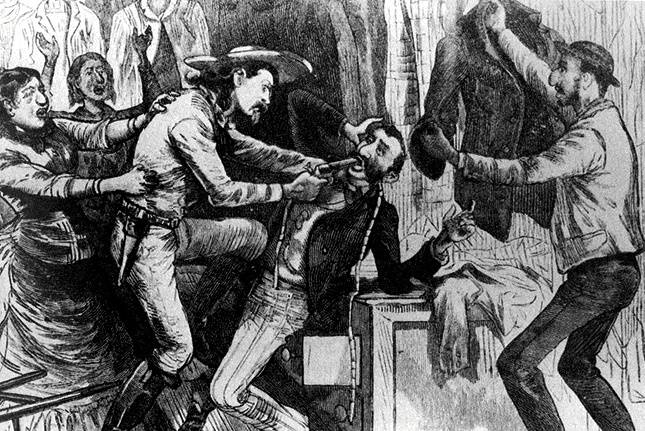 Jews menaced by a Cowboy in this 19th century anti-semitic drawing.

By 1849 hundreds of Jews had arrived in California and were laboring in goldfields and supply centers. Some were native-born and naturalized American Jews, others came directly from Europe. While some advanced more than others, all were part of the long, slow march out of ghettos of western and central Europe and shtetles of eastern Europe. Many bore the imprint of centuries of European oppression: pogroms, expulsions, segregations, exploitative taxes, barred occupations. Then, just as they were seeking more than Europe would grant them (many were involved with the failed European revolutions of 1848), burgeoning America in need of commercial skills threw open its doors. In San Francisco a number of the pioneer Jewish merchants became successful beyond their wildest dreams.

On the one hand, the same xenophobic eyes that saw "hideously tattooed New Zealanders, and short, thick, clumsy Japanese" also noted "a particularly remarked number of thick-lipped, hook-nosed, ox-eyed, cunning, oily Jews." In general, however, anti-Semitism in San Francisco was rare. Jewish pioneer merchants were welcomed far more equitably than their counterparts in the East; Jews were elected to public office at every level in the West, and were accepted into elite circles in San Francisco while their counterparts were being excluded in New York. Others distinguished themselves in business, amassing fortunes in clothing, banking and utilities, real estate and insurance, overseas commerce and paper products, tobacco and produce. In later generations the philanthropic institutions that sprung from the fortunes of these first families-- Fleishacker, Haas, Koshland, Stern, Steinhard, Dinkelspiel, Zellerbach and others-- made their names well-known among all Northern California. By the end of the 19th century the Jews of San Francisco were freer and more successful than Jews anywhere else in the world.

Why such acceptance and success?

San Francisco's unstructured and totally new society served to unite diverse newcomers in bonds of fraternity and solidarity with ease and liberality not matched elsewhere in the country. Jews' frequent role as public officeholders reflects the easy acceptance of able and energetic first-comers in an unstructured region. However, San Francisco as a whole was far from democratic. Chinese, Japanese, native Indians, Hispanics, were certainly not received in the way European immigrants were. Racial intolerance was a defining feature of early San Francisco.

Compared to the majority of eastern European Jews that settled in rest of the country, Jewish San Franciscans were predominantly from Germany. Because German culture was held in high esteem in the United States, these Jews' cultural antecedents and traditions contributed to their reputation in communities that valued cultural activity. German scholarship and art held enormous prestige, German was the standard modern foreign language in schools. Compared to Italians or Irish immigrants in Boston, German Jewish immigrants had cultural capital. They routinely joined societies devoted to German culture. In 1860 the president of the local German society was a Jew. German Jews followed other German-speakers who already had made their language and customs familiar fixtures of the American scene. And in the Reformed version that German-speaking immigrants favored, Judaism was comprehensible to 19th century American Protestants whereas Buddhism was not. Jewish success can also be attributed to the fact that many Jews arrived with precisely those skills that were most in demand in the newly developing capitalist markets of San Francisco. One fifth of all immigrant Jewish breadwinners of 1899-1914 had been in commerce in the old country, compared to less than 1/20 of all immigrants. Merchants, whether Jew or Gentile, were essential in the unstructured towns and cities if local economies were to flourish. The remoteness of San Francisco along with the affluence and cosmopolitan backgrounds of much of its population meant retail customers favored goods that came from distant manufactures and suppliers. This kind of commerce was peculiarly well matched to the skills and resources of Jewish immigrants.

Esteem and success followed as peddlers became resident merchants, and general stores became department stores. With San Francisco's relative lack of civil and social constraints, most Jews used their German cultural capital and their distinctly appropriate skills to quickly advance. From the beginning, Jews were central to the formation of a cosmopolitan San Francisco. Jews were not perceived as intruders or outsiders and anti-semitism was rare.